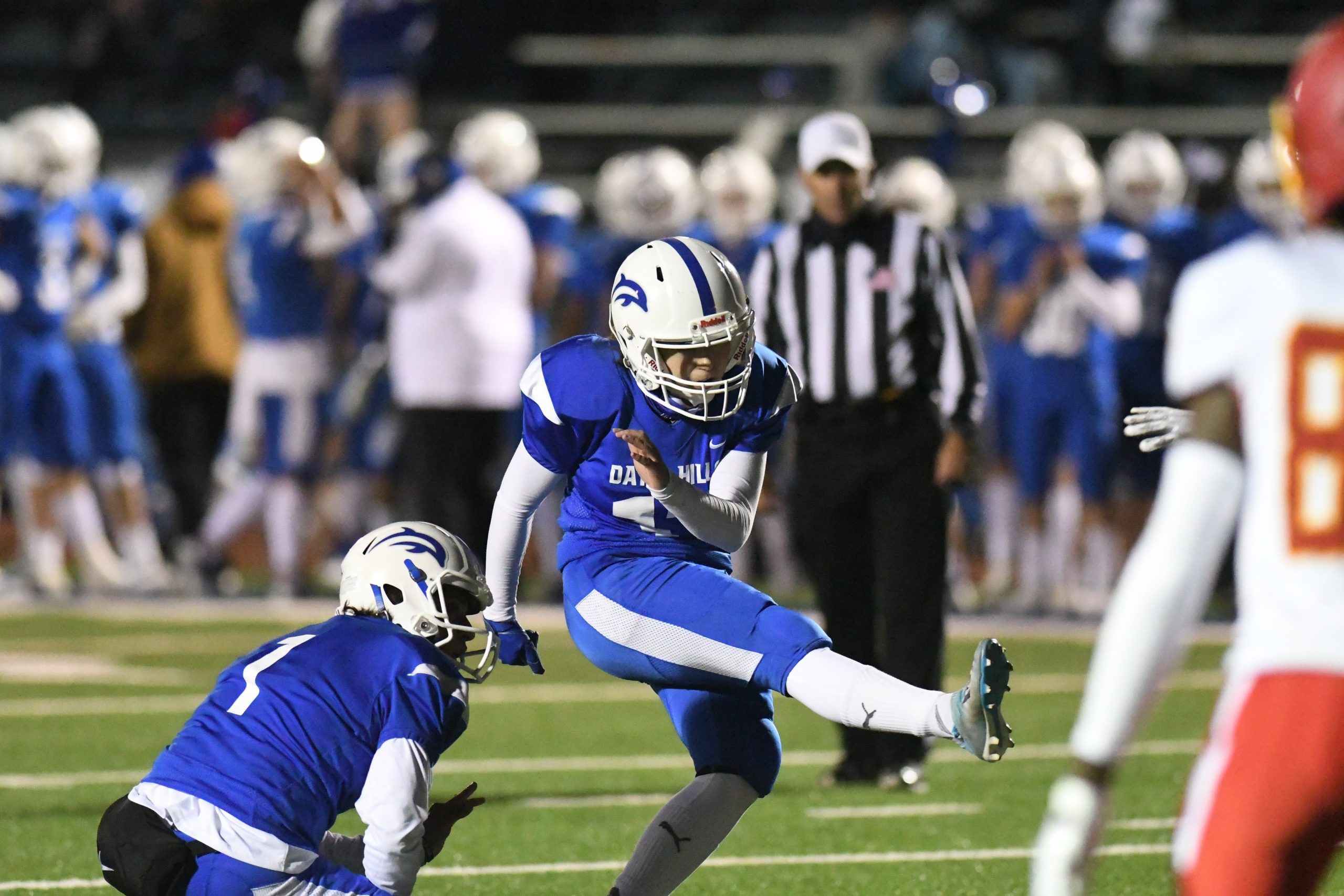 Friday, March 26 was a historic night for the Dana Hills football program.

Not for the Dolphins’ 34-7 win over Woodbridge, not for the back-to-back, 2-0 starts and not for any of quarterback Bo Kelly’s five total touchdowns. Dana Hills made history with an extra point.

Early in the second quarter after the Dolphins had scored their fourth touchdown of the game for a 26-0 lead, senior kicker Leah West came onto the field to break a barrier.

West’s PAT kick sailed between the uprights for the extra point and the 27-0 lead, making West the first female player to score a point in a varsity football game in Dana Hills history.

“It was pure joy, pure excitement,” West said. “It was an indescribable feeling knowing that I could be the first one to make history here. I didn’t know when I joined the team I’d be making history. I just wanted to play football.”

In her first practice at Dana Hills in February of last year, Dolphins co-head coach Curtis Madden told West he wanted her to be the first female to score a point at Dana Hills. West said that was when her desire to play football morphed into her chance to leave a legacy, which she cemented with her Friday night kick.

“It felt like a year’s worth of 5 a.m. practices, four hours of practice a day, every single day, came up to the culmination of this moment,” West said. “Coach Mikki looked at me and said, ‘You’ve got it, girl. Go out there and do what you were meant to do.’ ”

“Coach Mikki” is Dana Hills special teams coach Mikki St. Germain, who is the first female coach in Dana Hills football history. St. Germain was as proud as anyone else on the field on Friday.

“I’m going to be honest with you, I got choked up,” St. Germain said. “To see her break a glass ceiling, I could just feel it. I was just overwhelmed with excitement, and plus the rest of the team celebrated. I was really touched by that, that they celebrated her.”

“She puts in the work,” St. Germain said. “She doesn’t make excuses, she doesn’t say she can’t do something. She will go in and do everything they’re doing, and they see her as part of a team.”

West’s journey to the Dana Hills gridiron was sparked by the Dana Hills Homecoming game in October 2019. Amid all of the pomp, circumstance and atmosphere that the Homecoming game provides, there was a thriller on the field as well, as the Dolphins and Laguna Hills battled back and forth into overtime, when Dana Hills lost on a two-point conversion by the Hawks.

It was then that the then-soccer player aimed for a different goal.

“I just remember being in the stands with my friends,” West said, “and feeling the excitement on the field and the roar of the band. It was an amazing feeling, and it felt like I was meant to be on that field.”

West then joined the team in February of 2020 for practices, and as a soccer player, she found the natural transition to kicker and the special-teams unit, where she met St. Germain.

“I had no idea when I joined the team that they had a special teams’ coordinator who was female,” West said. “Once I realized it, I can’t imagine my experience any other way. She’s been so supportive, and she understands what it’s like to be a female in a typically male-dominated section. She gives me great advice about how to succeed no matter what obstacles are in front of me.”

St. Germain is in her second season as the Dolphins special-teams coach, but she’s been in love with the game of football since she was 7 years old and watching the New York Giants with her dad. St. Germain said she wanted to play football more than anything else in high school, but at the time, that just wasn’t happening.

Outside of being a fan, St. Germain didn’t become properly involved with football until her son started playing at age 6. She began as a team mom, and after knowing all the coaches over several years, she became an assistant coach.

In 2015, St. Germain became the head coach of the South Orange County Patriots midget-level football team and helped lead them to a youth Super Bowl title. Dana Hills co-head coach Phil Skinner saw St. Germain’s efforts and hired her for the Dolphins for the past two seasons.

As a woman who never played in a male-dominated sport, St. Germain has faced struggles in coaching. However, she said it’s never been from the players, and she’s never let an obstacle get in her way.

“It wasn’t the kids; it was the parents,” St. Germain said, specifically of her time in youth football. “And that was unfortunate, it was, but I stepped right in and let my teams know this is what we’re doing and how we’re doing it. I don’t have the luxury of not knowing what I’m doing, so I had to set the precedent right then and there.”

St. Germain said she’s been a sponge and soaked up as much football information as she can from every possible source. St. Germain has made connections with all of her players by treating them as if they were her own kids and family.

“When I joined football, she was the first coach I had,” Dana Hills starting kicker Kian Afrookhteh said. “Of course, everyone’s going to talk, and everyone is going to say and have their opinion about having a female coach, but Coach Mikki is one of the greatest coaches I’ve had. She’s there for all the players, and no matter who you are, she’ll be there for you.”