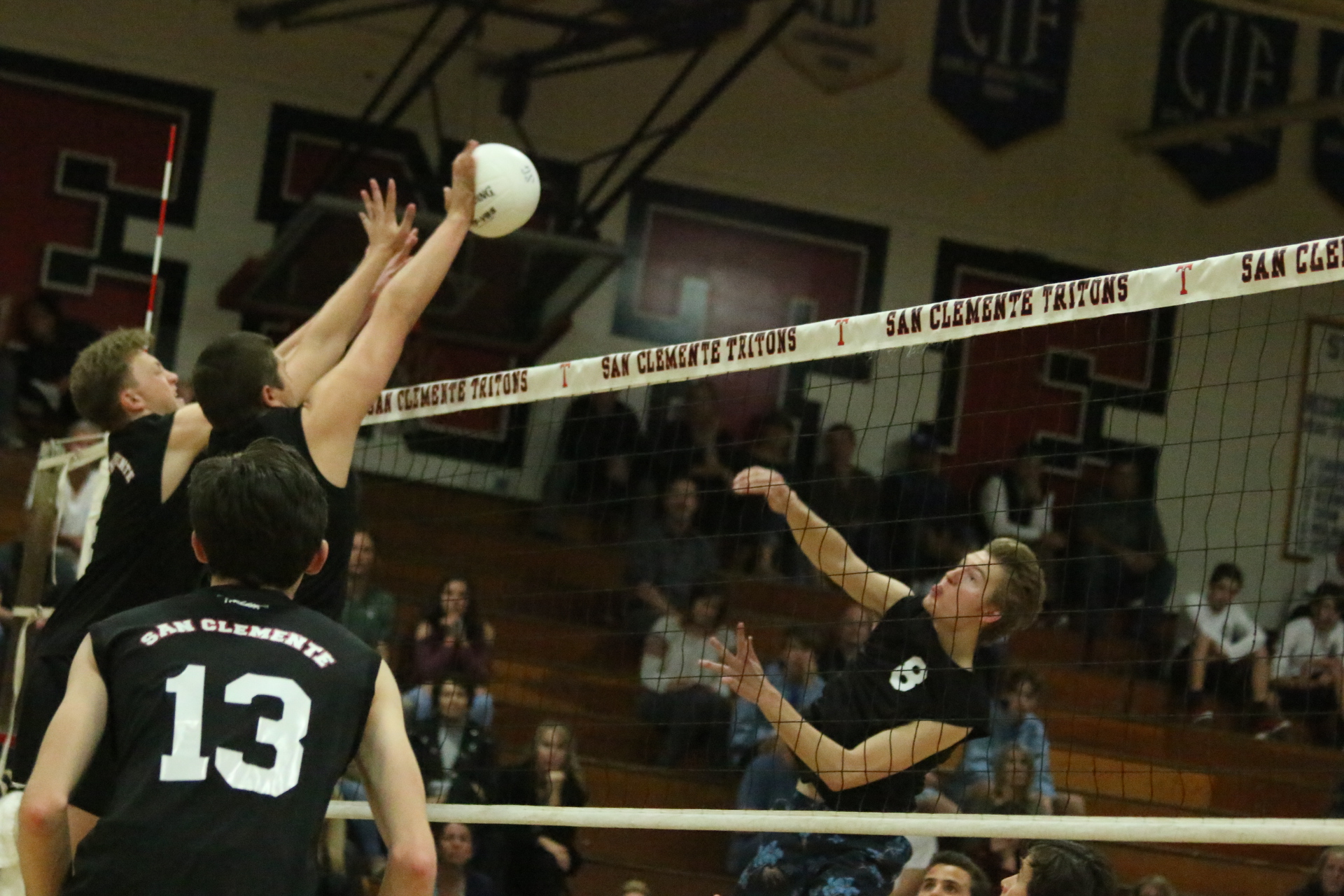 It was the South Coast League opener for the defending league champion Tritons and the second league contest for the Dolphins. It was also one of the crazier matches either coach had seen between the longtime rivals.

San Clemente was down 20-11 in the fourth set to Dana Hills but charged back to take the set, 27-25, and the match, 3-1. @SCHSTritons wins it’s South Coast League opener. @DanaHills 1-1. @ocboysvolley pic.twitter.com/RRuGiAB9us

“This team just never gives up,” San Clemente junior Marc Monier said. “We just keep fighting. We will never just let the ball drop and let them get ahead of us. We’ll come back down their throats and keep going.”

San Clemente (15-4, 1-0) continues league with a trip to Aliso Niguel on Thursday.

Dana Hills (11-10, 1-1) hosts Saddleback Valley Christian on Thursday and returns to league play after its Spring Break with a home match against Aliso Niguel on April 10.

Both teams have had an influx of youth on the roster as the Tritons lost nine seniors and the Dolphins have three sophomores in the starting line-up.

“There’s no drill or whatever you can do for experience,” Simmons said. “You have to get out there and playing. Everybody goes through that at one stage or another. I can’t do it in practice. It was their (San Clemente’s) first league game, our first time coming down to San Clemente. We’ve had great rivalries, but again, a bigger crowd, a little more intensity, you just have to get used to it.”

San Clemente used the intensity to turn the match in the fourth set.

Dana Hills looked on it was going to cruise to the set win and force a winner-take-all fifth set, but a succession of yellow cards and a red card against San Clemente lit a fire in the young Tritons.

“That made us keep being aggressive and keep going at it,” Monier said. “Swinging hard and digging every ball that comes over.”

Down 20-11, the Tritons rallied with an 11-2 run to tie the match at 22-all. The teams traded points and San Clemente fought off two Dana Hills set points.

San Clemente took the lead at 26-25 and senior Connor Mateer’s kill ended an entreating rally and the match in the Tritons’ favor.

Monier and senior Kyle Burick co-led the Tritons with 11 kills each. Monier also had a team-high 17 digs.

San Clemente rallied to take the opening set as well.

Dana Hills scored the first seven points of the match, but the Tritons tied it at 8-8 and took the lead for good at 10-9. The Dolphins pulled within two, but San Clemente took the set, 25-21.

“I think both teams are very, very similar,” Simmons said. “Teams would go up by seven, and then the other team would catch them. Really, really back and forth.”

Dana Hills dominated the second set as the Dolphins opened with five straight blocks and a 6-0 lead. Sophomore Nick Rigo was the leader of the block brigade, and senior Ryan Neumann was strong in the set as well. Dana Hills took the set, 25-17.

Dana Hills opens the second set with a 5-0 lead and a monster performance from Nick Rigo. Ryan Neumann closes out the set here from the back for the win over San Clemente, 25-17. Match tied up 1-1. @DanaHills @DHHSPrincipal @CUSD_ATHLETICS pic.twitter.com/GWEw9kvSmg

San Clemente went on to dominated the third set. The Tritons were the ones with the early run for a 7-1 lead. San Clemente took the set easily, 25-14.

In the fourth set, Dana Hills got points in bunches to earn its 20-11 lead before San Clemente turned on its comeback.