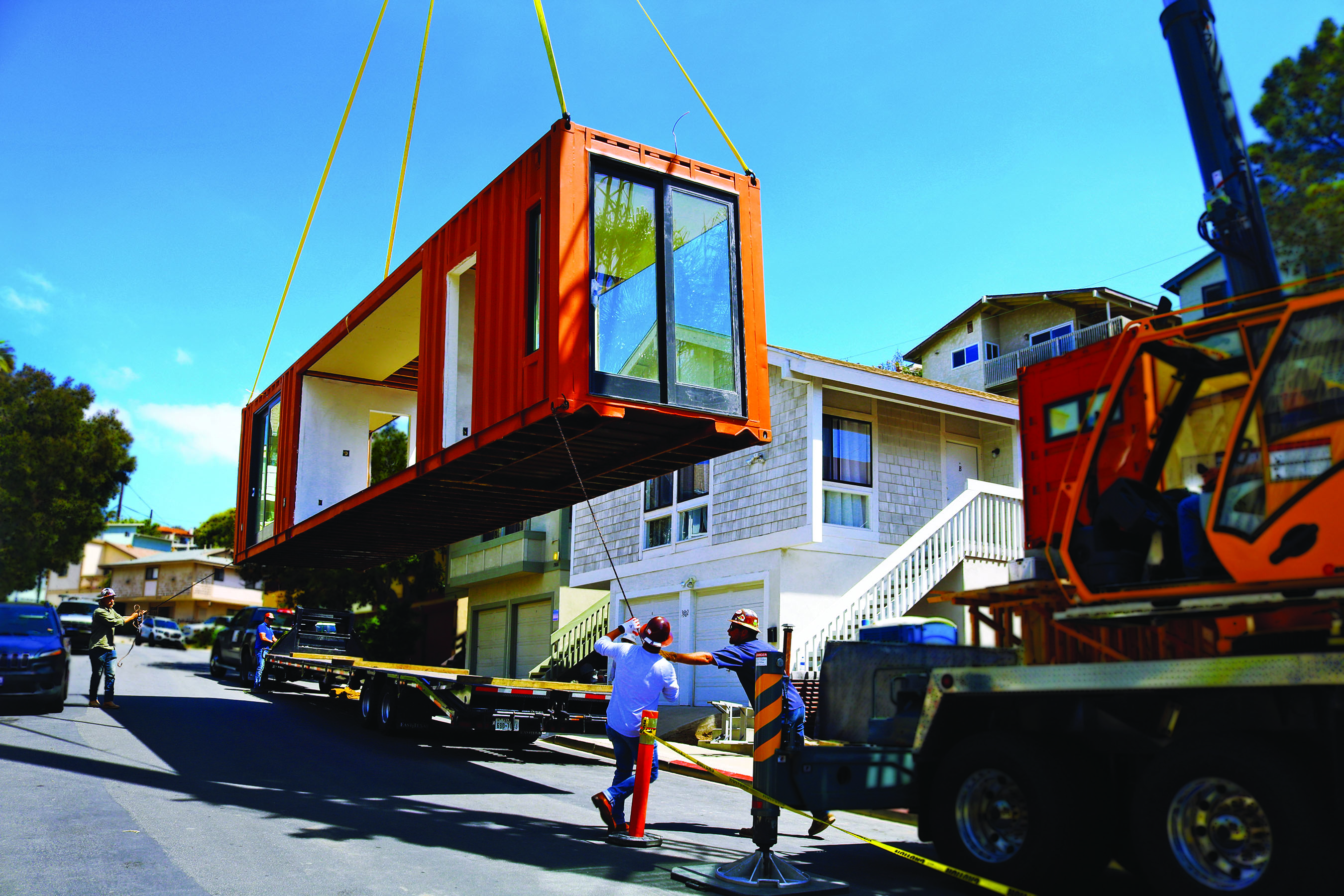 Max Auerswald, 30, wanted his dream home to tell a story.

The first floor would feature stone, and the second story would be made of metals and concrete.

“I’m a masonry worker; I work with concrete and stone. I want my home to show that,” Auerswald said.

As for the second floor of the home, which now holds four modified shipment containers, Talee Auerswald says inspiration came when the couple traveled to Australia.

“We saw so many modern, fresh designs while on this adventure together,” Talee said. “I think it definitely left an impact on Max’s creativity.”

On Wednesday, May 1, the Auerswalds installed two 40-foot storage containers and two 20-foot containers on the second story of their home, which is currently being constructed from scratch. It was a feat to celebrate, after the Auerswalds decided to demolish their home at 33832 Robles in Dana Point in 2016 to build a bigger house.

The modular home model is part of a recent trend to repurpose materials and reduce the amount of wood needed for construction in order to be eco-friendly.

“I hope this project can inspire people to think of ways we can repurpose items creatively. This movement could shape the availability of affordable housing,” Max said.

The Auerswalds installed recycled, cargo-worthy containers, which cost about $1,800 each. A brand new shipping container can cost up to $5,000, Max said.

The project the couple had in mind required a minor site development permit entitlement from the City of Dana Point, because the initial structure was legal nonconforming, meaning it no longer met present zoning and building regulations. The entitlement was submitted in March 2017 and approved in September 2017. The building check plan review was submitted in December 2017 and approved in November 2018, with a permit being issued within the month. Approval for converting the shipment containers to meet code required working with inspectors on a state level, a more strenuous process.

The plans for the container home were drawn up by Jim Ettinger, a construction designer, and the containers models were built and modified by John Sanders, the owner of GBO Homes, LLC. Most involved with the project say it was a learning process to obtain the necessary approval, but Max says the time and work put in has been worth it.

“I cannot stress this enough. It took a village,” Max said. “Without the help of my father, my uncle, all my friends and family in the construction industry, this would not be possible.”

Talee Auerswald gave birth to their son, Auggie, in December. The family has been staying with a friend in the same neighborhood, near their property. They hope that the home will be ready to move in to by September.

Partners Involved in the Project: