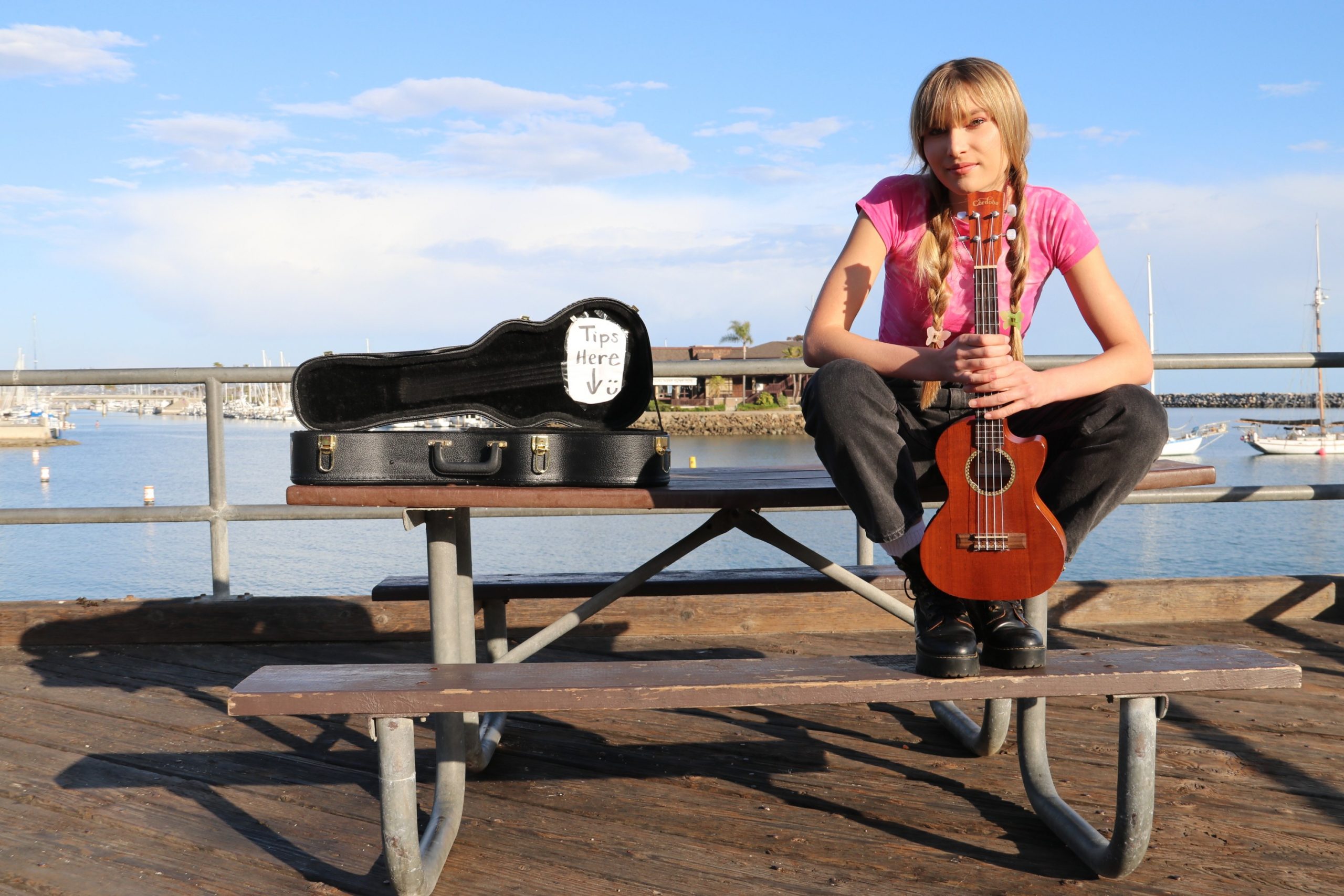 August had heard that fans in costume had a higher chance of being invited on stage or being granted exclusive backstage access.

“But we were back in the nosebleed seats. There’s no way she saw us,” August said with a laugh.

After successfully making it to the final 12 round of season 19 of American Idol, it’s safe to say that this time August made her impression on Perry, who judges contestants alongside Luke Bryan and Lionel Richie. After being voted off the show ahead of the final nine, 15-year-old August says she has no regrets—and is looking ahead toward a musical career.

Looking back, the Dana Hills High School freshman’s foundation of music began with her parents’ eclectic taste for music: honoring the classics while embracing new sounds.

“Our family actually isn’t musical at all … but we’re music enthusiasts,” said August’s mom, Amy Zaharek. “We’d play reggae, we’d play the oldies like Elvis Presley, Queen, Elton John, Fleetwood Mac. But current stuff,  too … whatever mood we were in.”

When August began to seek out her own music to listen to, she gravitated toward artists such as Adele, Lady Gaga, Ed Sheeran, Julia Michaels and Shawn Mendes.

“It was when she was about 8 years old and she decided to sing the National Anthem at a youth basketball game …” Zaharek said. “That’s when we heard her and really were like, ‘Whoa.’ ”

August recalls her nervousness ahead of the gig—but that was part of what made the thrill of performing like an addiction.

“Since I’ve come into this world, I’ve felt like I was destined to do this,” August said. “I’m destined to sing and perform for people. It really feels like this is what I’m meant to do.”

After her first few public stints, August begged her mom to let her go to a vocal coach—which helped refine and develop August as an artist. But Zaharek attributes August’s further artistic development to learning to play instruments.

“We were on a family trip to Kauai, and I saw this shop with all these beautiful ukuleles. I went inside and spoke to the owner and told her I was a singer,” August said. “The owner tells me to go to her son’s music shop on the island and sing for him.”

August, who was 10 years old at the time, followed through with the woman’s instructions and walked into her son’s shop, Komoa Ukelele Company, and sang “When I Was Your Man” by Bruno Mars and “Stay with Me” by Sam Smith.

“Right there, on the spot, they gifted me my first-ever ukulele,” August said. “That’s really how I started playing the ukulele. It fostered my songwriting and fostered my interest in learning other instruments, too.”

August came back to the hotel that day and wrote her first song, “Mermaid Child.” She went on to continue playing the keyboard as well as the guitar, learning from local teachers including Donna Fidone and Barbie Aglio.

August continued to play gigs locally and even performed the National Anthem at the time capsule ceremony held in Dana Point Harbor in 2019.

In the summer of 2020, August was scouted to audition for American Idol, thanks to her social media showcasing her singing. She impressed the first panel of judges over Zoom and went on for further auditioning in San Diego in October.

“At first, I was a little apprehensive. I had competed for The Voice before, and I wasn’t sure if I wanted to do another reality show,” August said. “But I thought, ‘What do I have to lose?’ All my performances had been canceled because of COVID. I was singing for my walls at that point.”

It was a decision that August rejoices in making. Reflecting back, a major highlight in the show’s season was August’s opportunity to sing an original song.

“I decided to do an original song, and it was a huge risk, because doing an original on the show can be very scary,” August said. “And so I just stayed true to myself and I kind of blocked out everything around me. I stayed with my roots.”

In the performance that aired on Monday, March 29, she decided to sing “Ghost of You,” written during the pandemic about eight months ago in her bedroom.

“I wrote the song about just a strong emotion I was feeling, just like losing someone who you love dearly and them kind of leaving you … going away out of your life,” August said. “That’s what the song is about, how you’re left with the ghost.”

August performed her song without a band or backup.

“It was really meaningful. It means a lot to me and is very close to my heart,” August said. “So I performed that song and gave it my all. I put everything out there, I poured my emotions out.”

“Do you realize you are singing far beyond your age?” Richie said in response to her performance. “If this is you at 15, then you with your driver’s license, you’re going to be terrifying.”

Perry, who may have missed sight of August in her banana costume all those years ago, described August as an old soul.

“I think your soul is saying I’m coming back this time. I’m going to do it right, 100 percent, ace this test of life and become that queen,” Perry said. “You better buckle up, honey, all those licenses are coming.”

August described that moment as surreal. “Overall, it was such a great experience. I got to show sides of myself that I don’t typically have the opportunity to show. Performing alongside Josh Groban, I really got to push boundaries that I haven’t pushed before—that style was so different from anything I’ve done.”

“I came into the competition wanting to share something I’m passionate about, and that’s singing. I wanted to meet people, open doors and create opportunities,” August said.

Since returning to Orange County, August is as invigorated as ever to continue the momentum toward a career in singing. Whether it’s rehearsing, reaching out to contacts in the industry or writing daily manifestations of a singing career, August says she remains focused on moving forward toward her goals of singing on stage.

“I want to release an EP, I want a top song on Billboard, I wan to win a Grammy, I want to perform at the Troubadour,” August said. “I’m going to make all of that happen.”