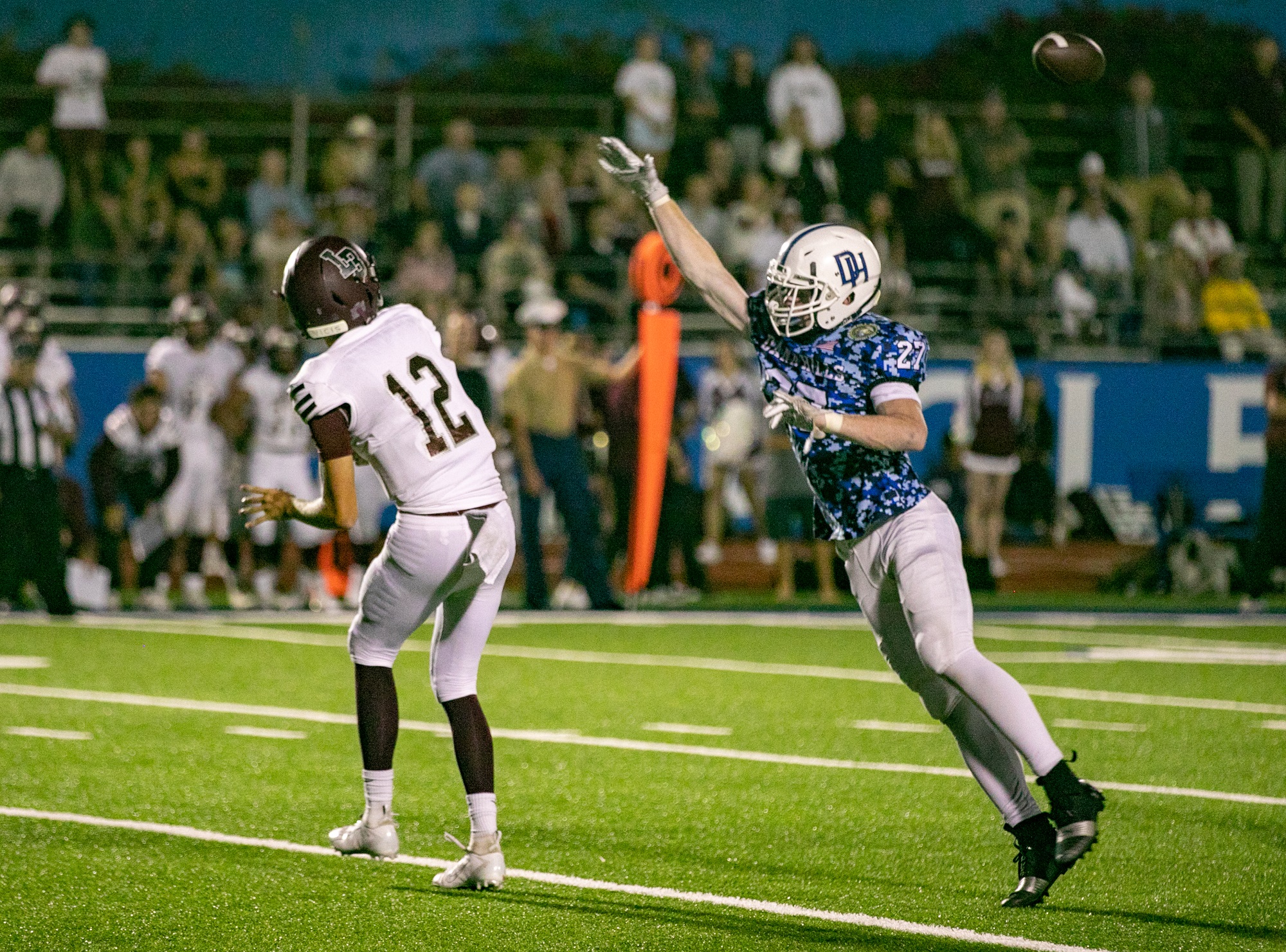 HUNTINGTON BEACH – The Dana Hills football “revenge tour,” as the players are calling it, crossed off another name on the list, and the Dolphins added another couple record notches on their belt on Friday.

Liam Boersma set the school record for sacks in a season with three more, and Aiden Frangipane ran for a score and denied another on an interception to push Dana Hills over Ocean View, 20-7, and extend the Dolphins school-record start to 6-0 in a nonleague game at Ocean View High School.

“It’s different than Dana Hills has ever experienced,” Dana Hills coach Phil Skinner said. “They’re enjoying the ride. We only let them enjoy the ride until Sunday night. When they come to school on Monday morning, we start over. They’ve got the pattern down now.”

Liam Boersma talks about Dana Hills 20-7 win over Ocean View where he added 3 more sacks for a total of 18.5 on the season, which sets the school record. @dana_football @dhhs_athletics @DanaHSPrincipal @DanaPointTimes pic.twitter.com/tmE7PDpQ2B

Dana Hills, ranked No. 3 in Division 12, also clinched its first winning season since 2009. The Dolphins are undefeated going into Sea View League play where they open at home against Laguna Hills on Friday, Oct. 4.

Dana Hills can now be optimistic about entering its league schedule for the first time in a long time.

“Confidence is everything,” Skinner said. “We’ve been wondering how bad we’d get our butts kicked in the past going into league. Now, I think we’re in the driver’s seat a little bit. But again, what happened in the past doesn’t matter on Monday. We know how hard it is to win games at Dana Hills.”

Despite the record start and their ranking in the division, Dana Hills may still need to finish second in the four-team Sea View League for a guaranteed shot at playoffs. Division 12 is crowded, and wild card spots may be hard to find.

For now, the Dolphins relish in another win that was once again spurred on by the defensive effort.

The Dana Hills front provided pressure all night, and senior defensive end Boersma had three sacks to set the school record for sacks in a season with 18 and 1/2, which leads the nation, according to MaxPreps, in just six games. Zack Alario set the record in 2009 with 17 and 1/2 sacks in 12 games.

“He’s absolutely special,” Skinner said of Boersma. “He’s better than any defender I’ve ever had. We’re doing a lot of creative things with him now. We’re trying to find different ways for him to disrupt.”

Trevor Gartlan also had a sack.

With Dana Hills leading 10-7 in the fourth quarter and Ocean View threatening to take the lead, Frangipane made his game-changing play.

Ocean View threw toward the end zone looking for the lead, but Frangipane undercut the pass and intercepted the ball in the end zone. The Dolphins junior then carried it out for a 56-yard return to set up Dana Hills in Ocean View territory.

On the ensuing drive, Dana Hills converted on fourth down with a 16 yard run, and Zack Saavedra hit a wide-open Remington Kislig for a 25-yard touchdown and the 17-7 lead.

“Football is a game of momentum,” Skinner said. “When we get that situation and the tide turns for us, you can’t say how much that affects the confidence going forward.”

Saavedra completed 15 of 28 passes for 160 yards and a touchdown.

Dana Hills shut down Ocean View the rest of the way, and Kian Afrookhteh hit a field goal in the final minute for the final of 20-7.

Ocean View did score on its opening drive with the help of a Dana Hills pass interference call. The Seahawks then connected for a 34-yard pass, and then ran in the 1-yard score.

Dana Hills operated quickly on offense all night, and the Dolphins finally got a rhythm going late in the first quarter.

Just on the other side of the fourth quarter, Dana Hills tied the score on a 3-yard run by Frangipane.

From there, it was a field position battle, as the teams defenses locked up and forced punts.

With the help of an Ocean View pass interference late in the third quarter, the Dolphins managed to take the lead. Kian Afrookhteh knocked in a 24-yard field goal with 17 seconds left in the quarter.