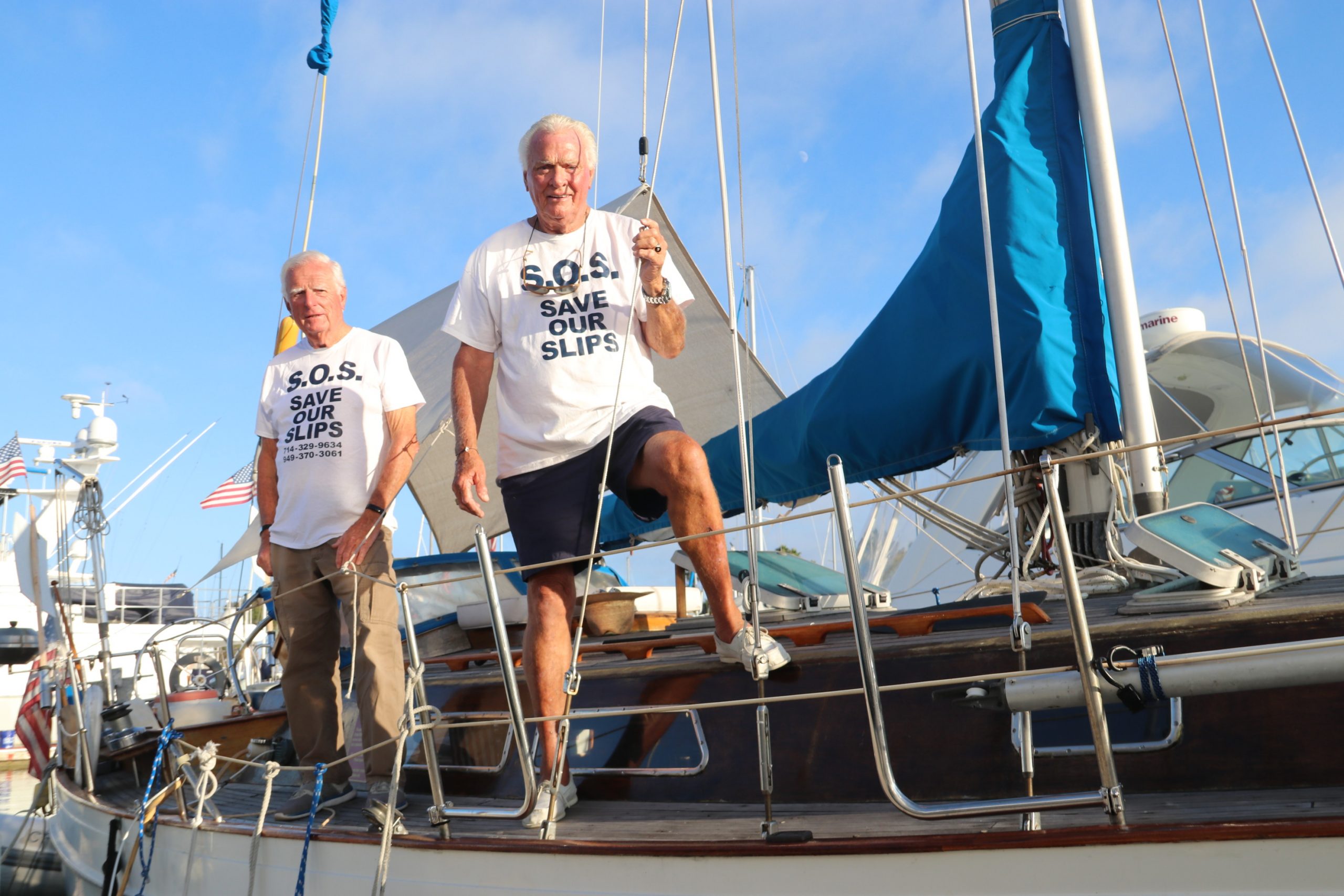 Three years ago, George Hughes spent a hefty chunk of his life savings on a beautiful boat.

“I’m not a well-to-do man. This boat gives the wrong impression,” Hughes said. “But I worked hard for it. I had this idea I’d retire on it. I refinanced my house and rent it out since I can’t afford to live there now.”

“With all the maladies that come with these health issues, I can’t just take my boat and go somewhere,” Hughes said.

Hughes, along with Wayne Addison, assembled the group Save Our Slips (SOS) upon learning they’d have to start paying more for their boat slips in the fall. Now SOS and the Dana Point Boaters Association, are continuing their efforts to halt the slip fee increases scheduled to go into effect Friday, Oct. 1.

Since learning of the slip fee increases, boaters have organized two demonstrations, fundraised, spoken at meetings and have announced a potential lawsuit.

The class-action lawsuit is reportedly being prepared on behalf of all Dana Point Harbor boaters, and expected to be filed before the end of October. The purpose of the suit is to “address the exorbitant slip fee increases and other inappropriate actions committed by the Dana Point Harbor Partners,” according to DPBA.

DPBA states that the group intends to work together with other stakeholders who have collected funds for the pursuit of legal action.

Dana Point Harbor was established under the Dana Point Tidelands Act of 1961. What the county is able to do with its waterfront is determined by the California Coastal Commission and laid out through a Local Coastal Plan (LCP). Any amendments to the plan can take years.

“Since our involvement in the revitalization process, slip rates have always been a topic of discussion and real concern for the Dana Point boater community,” the notice to boaters stated. “It is no secret that the Marina at Dana Point has been the best deal in the County, especially for the large vessels that it accommodates.”

Come Oct. 1, boaters with 55- and 60-foot vessels will be seeing the biggest price increase of about 90% (or a little more than $1,000 more than their current fees). For slip sizes less than 30 feet, tenants will see an increase of about 26%. For the 25-foot vessel, there will be about an additional $90, which the letter likened to two scoops of bait from the local bait barge per month.

Dana Point Harbor Partners comprises three entities—Bellwether Financial Group, Burnham-Ward Properties and R.D. Olson Development—which came together through a public-private partnership to redevelop and operate the harbor. The developers will design, fund and build the improvements, then operate the harbor for the duration of the 66-year lease. A Bellwether-owned entity, Bellingham Marine will develop and build the marina, while sister company Bellport will oversee operations.

But according to correspondence, newsletters and GoFundMe pages organized by SOS and DPBA, some boaters take issue with how the Partners have managed the marina. Hughes alleged that maintenance has not been consistent or safe, citing chunks of roof from marina buildings falling and bathrooms not being properly cared for.

Additionally, DPBA has called into question whether a public-private partnership is the solution for harbor management. In a letter to OC Board Supervisor Lisa Bartlett, DPBA President Anne Eubanks pointed to how Long Beach Marinas approached slip increases.

“The slip rate increase in Long Beach marinas effective Oct. 1 is a 2% increase for all slip sizes…” said Eubanks. “Quite the disparity since the slips in Alamitos Bay have been renovated and the Dana Point slips are literally crumbling into the harbor.”

However, leadership with the DPBA and SOS assert that the methodology is not compliant with the Dana Point Tidelands Trust and are calling on the Orange County Board of Supervisors intervene.

“Our contention is that the Harbor Partners used a formula of their own to determine market rates,” said Addison.

But according to marina management, approximately 90% of the tenants come from Orange County, with the majority of the rest coming from Riverside County.

The comparison showed that the new rates fall squarely within this market as well.

“Based on this, there is no basis for the claim that the slip fees are non-market or unreasonable or violate the Lease in any way,” Grippo added. “The assertion that the rates are in the violation of the Tidelands Grant has been thoroughly vetted by my staff and by County staff. The claim is baseless.”

According to management, the waitlists have grown since the rate increases were announced.

“It is hard to imagine that the marina would continue to be 100% full with growing waitlists if the rates were unreasonable … Some of our waitlists have Orange County residents who have been waiting over 20 years,” said Grippo.