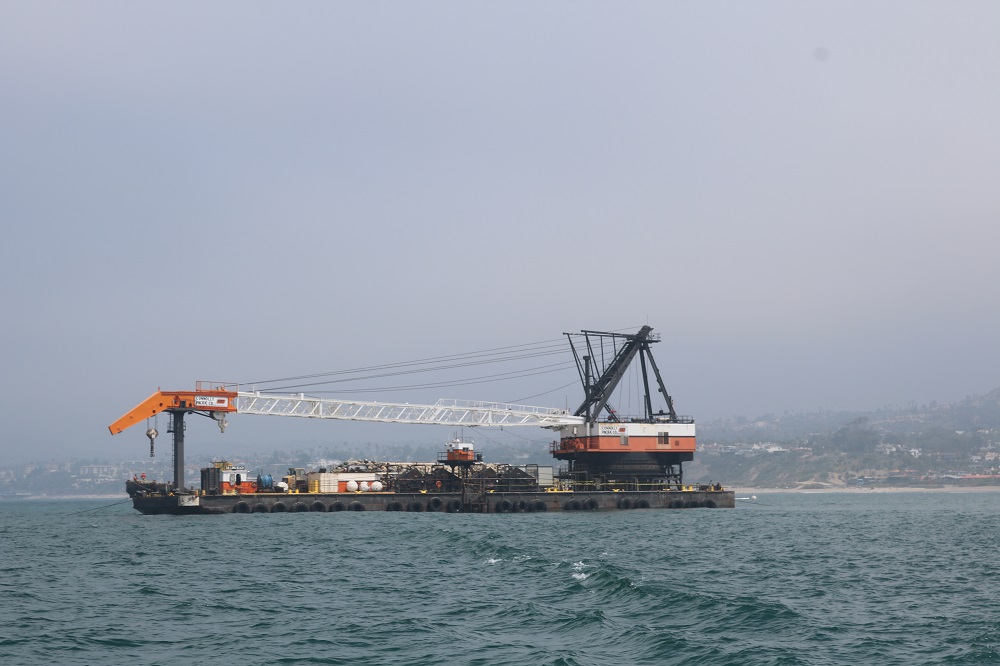 Beneath the Barge: An Inside Look at Edison’s Operations to Expand Artificial Reef

Construction to expand the Wheeler North Reef into Dana Point waters began last month, as indicated by the derrick barge located off the coast of San Clemente, about a half-mile from Califia State Beach.

While paddleboarders and members of the public are cautioned to keep a safe distance from the barge, Dana Point Times was given access to the derrick for a closer look on the operation.

Jenny McGee, a Dana Hills High School alumnus, is the project manager for the reef expansion.

About the third week of August, the derrick barge will move north until it is directly in line with the pier, and then it will work its way northward, according to McGee. The northernmost portion of the new reef will be located just off of Beach Road on the southern tip of Capistrano Beach.

Wheeler North Reef, a 174-acre, man-made kelp forest, currently stretches from out past the end of the San Clemente Pier south to Seal Rock. SCE is expanding the reef to more than double the size (384 acres) and stretching it into Dana Point waters. Mandated by the California Coastal Commission, the reef is intended to facilitate kelp forests that were lost to warm-water discharge from the San Onofre Nuclear Generating Station (SONGS).

The project is anticipated to pause in September, in respect to lobster season, and resume next year in May and September 2020.

McGee says beachgoers and boaters will see one or two tugboats, at most, in a given day.

“We are making sure the tugboats towing the rock are well-coordinated. We want to be as synchronized and efficient as possible. We wouldn’t want a tugboat to be waiting around, waiting to unload rock, so if there’s one tugboat ahead of schedule, it will wait in Long Beach,” McGee said.

The reef material includes metavolcanic and granitic boulders about one-half to three feet in diameter and hail from rock quarries in Catalina Island and Ensenada, Mexico. Boaters are advised not to intervene between the barge and tugboats, which are traveling at a speed of 7-8 knots.

“What I love about this project is that even after we’ve fulfilled compliance, this reef is going to continue to give back. It will still be facilitating marine life and supporting the kelp bed,” McGee said. “I feel like I am adding value to the local ecosystem and contributing to something much bigger than myself.”

A single layer of rocks on the sea floor will be three-feet high or less, in a minimum of 38-feet-deep water.

The original reef was built in 1988 and stretches about 1.4 miles southward from the San Clemente Pier. The $20 million dollar expansion will reach north of the pier for total length of about five miles. The cost dropped from the original estimate of $33 million. The bill will be footed by rate-payers.

For boaters, the project is listed in the U.S. Coast Guard Local Notice to Mariners, which provides call signs and radio frequencies for the derrick barge and tugboats working on the reef project. For questions, visit songscommunity.com or email nuccomm@songs.sce.com.