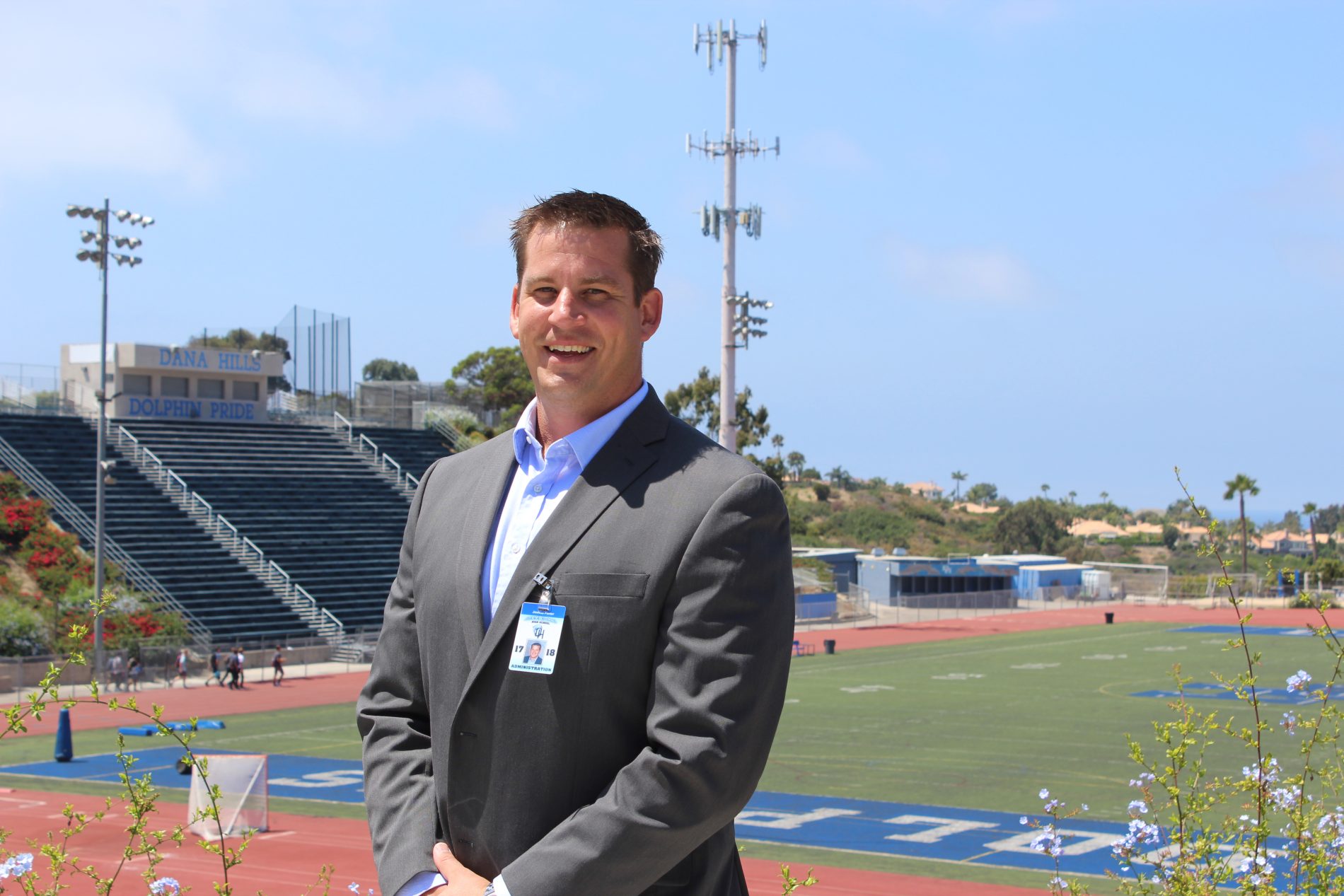 Christina Portillo, principal at R.H. Dana Science and Technology Academy, poses for a photo with a student on the first day of school. Photo: Kristina Pritchett

Christina Portillo, principal at R.H. Dana Science and Technology Academy, poses for a photo with a student on the first day of school. Photo: Kristina Pritchett

Summer may not be over seasonally, but for Capistrano Unified School District (CUSD) students, the bells have rung.

In two of the Dana Point schools, there have been some changes, but principals are looking forward to the new school year.

At R.H. Dana Elementary Science and Technology Academy, many students walked up in white shirts adorned with a new logo.

Students are encouraged to wear T-shirts and cardigans which display the school’s logo.

But, this isn’t the only change students are seeing.

R.H. Dana was one of the schools selected by CUSD to go through an “elementary school reimaging process.” The process began after discussing how to reinvigorate under-enrolled schools in the district.

Over the past year, teachers at R.H. Dana have been exploring what the academy could look like, and what they would need to change in order to accommodate that vision. Part of those plans included creating a three-year plan, meeting with an advertising agency, creating a new logo and writing a new mission statement.

“We’re preparing kids for the future with an inquiry-based curriculum that fosters curiosity and technology-enabled problem-solving,” Portillo previously told the Dana Point Times. “Ultimately what we want to look at is creating these science experiments to find real world solutions, and using that technology to support real world research results.”

Portillo also said with the school’s connection to the Ocean Institute and the ocean nearby, it was a natural fit to focus on science.

Some additions students may start seeing include a Design Lab.

“The Design Lab will be a place for students to extend their projects to a higher level with hands-on learning through the use of a 3-D printer, mini iPads, green screens and filming, as well as coding and robotics,” Portillo said.

Portillo added the school will be partnering with Trash for Teaching to provide an extensive supply of repurposed materials for students to use for designing their creative and innovative projects.

Outside on the grounds, a retaining wall was built for the school’s native garden, a garden shed was built to store supplies and planter boxes were weeded and painted.

“The gardens will be used by classrooms to provide outdoor learning lessons on flowers, vegetables, fruits, native plants and enhance science connections such as the life cycle,” Portillo said.

Palisades Elementary to focus on writing

At Palisades Elementary School, Principal Curt Visca said the focus for students—kindergarten through fifth-grade—will be to become better writers.

“Teachers will have writing prompts for students and provide guidance and advice to students throughout the school year,” Visca said.

“We will also continue to provide a fun and encouraging learning environment for students through the Wave Morning Show, Friday Flag ceremonies, Wave of the Week student recognition and Funky Fridays,” Visca said.

Across the city, older students walked around Dana Hills High School during lunchtime. Inside, a new face smiled as the high schoolers moved in the hallway before the bell rang.

In July, Joshua Porter was hired as the Dana Hills High School principal after the previous principal, Jason Allemann, left for a new role in Laguna Beach.

“It’s going great,” Porter said about his new position. “Everyone has been so welcoming, not just the staff and students, but the community as a whole.”

Porter previously held the position of Carlsbad High School’s principal, but has lived in Orange County most of his life.

“I was working for Tustin Unified School District and about three years ago, I was very fortunate to be offered the opportunity to be principal at Carlsbad High School,” Porter said.

He said, initially, it wasn’t in his plans to become a high school principal. His background began with political science.

“I used to volunteer at a school in Tustin; I would help in physical education. I helped with small group readings with kids too,” Porter said. “The principal at the time suggested, ‘why don’t you become a teacher?’ I was volunteering, I felt like it was a good purpose.”

He said he enjoyed volunteering because of the things he was provided as a kid.

“It didn’t necessarily click at the time that that was the path I was going to go down, but it was definitely something I enjoyed and it felt natural,” Porter said. “Not so much what I was giving, but how the kids were growing and to watch them become young adults in such a short period of time.”

From there, he transitioned into teaching.

He said he’s been a fan of using technology in classrooms to help support student learning and provide experiences they may not otherwise be provided.

His experience with technology eventually led him to administrative roles. Now, he’s ready to get to know the students, staff and community.

“Everyone –including the personnel, staff, teachers, cafeteria workers, custodian staff—we’re all here for the kids,” Porter said. “It’s neat seeing them here and starting to figure out what the community will be like. I’m very excited to see that.”

On Wednesday, Aug. 30, parents will have the opportunity to meet with Porter in the Porthole Theater. A meet and greet will begin at 6 p.m.