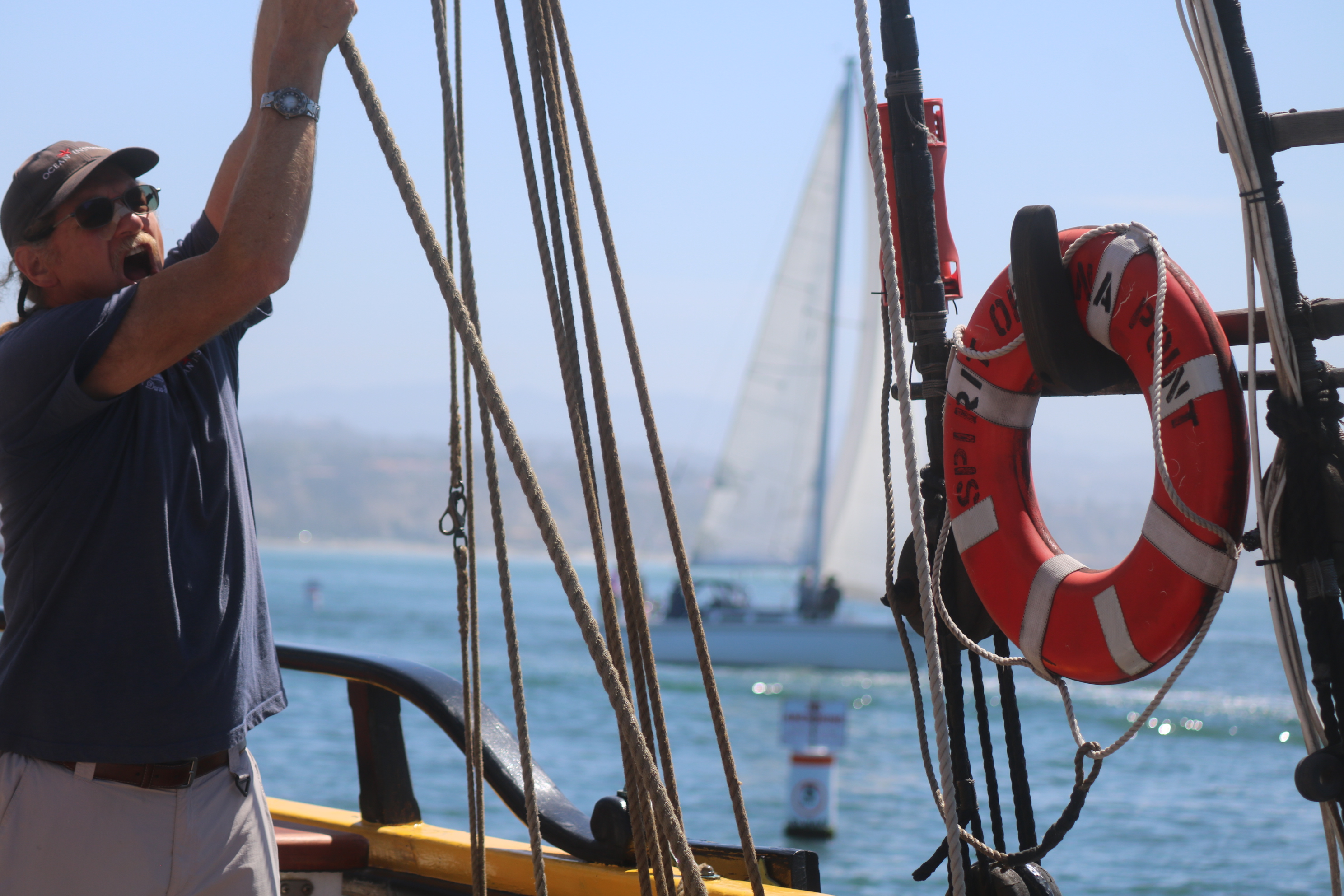 Au-Natural-ist: The Spirit of Dana Point sets sail with a crew of citizens on inaugural Earth Day ‘Naturalist’ tour

As the sails raised on the 114’ schooner The Spirit of Dana Point, Ren Higgins bellowed sing-along sailor’s songs to inspire his crew, made up of largely curious land-lubbing Southern California residents.

On Earth Day, April 22, The Ocean Institute presented its first naturalist sail, where 15 citizen sailors boarded the Spirit of Dana Point in an attempt to combine nature and history in the ways their sea-bearing fore-fathers did, under the very elements themselves.

Higgins, a six-year crew member of the Spirit, began the sunny afternoon with a short presentation inside the Institute’s boathouse, explaining the prominence and importance of historical naturalists including Charles Darwin, Thomas Nuttall and David Nelson, the naturalist on the voyages of Captain Cook.

Enlightened, the citizen scientists boarded the Spirit, anxious to explore the seas outside the Harbor.

They learned the diverse skill set of a scientist at sea as almost immediately, Higgins, under instruction from first mate Kristen McGowan, organized the citizens turned crew-members into teams to raise the three main sails.

With light winds, the pace was slow, which although not thrilling for Captain Peter Haenebalske was ideal for Haenebalske, McGoawan and Higgins and other staff to single off with the earnest naturalists and take in the environment around them.

“This is the way, this is the sort of vessel that men have used to travel the seas for literally hundreds of years,” Haenebalske said. “It keeps history alive, and it forms a connection. I take pride in carrying on the tradition and introducing this to new people.”

Higgins, who began as a volunteer at the Ocean Institute, felt similarly about his experience working with the public.

“It’s a joy working with the public, bringing them into this world,” Higgins remarked. “It’s always incredible for people to have their moments when the not only ‘understand something,’ and connect to it.”

Upon saying that, the passionate Higgins, seeing something in the corner of his eye, dashed light-footed to the bow. He proceeded to track, identify and compare the common dolphin (Delphinus delphis) swimming below the Spirit.

Upon returning to the shore, Ocean Institute maritime program director Dan Goldbacher said universally, the crew and the more than a dozen citizens, now equipped with upgraded sea-legs, enjoyed the tour.

Goldbacher said that the history of the famous naturalist characters that have passed through Dana Point, combined with the natural elements by-land and by-sea, hit all the elements of the Ocean Institute’s goal of universal “ocean literacy.”

“Humans are directly tied to the ocean,” Goldbacher reminded.

Stepping over the of thick rope now tying the Spirit to the dock, the irony sets in that being tied to the ocean means recognizing the fluid motion of, and our space within, the bountiful natural beauty surrounding us in Dana Point.