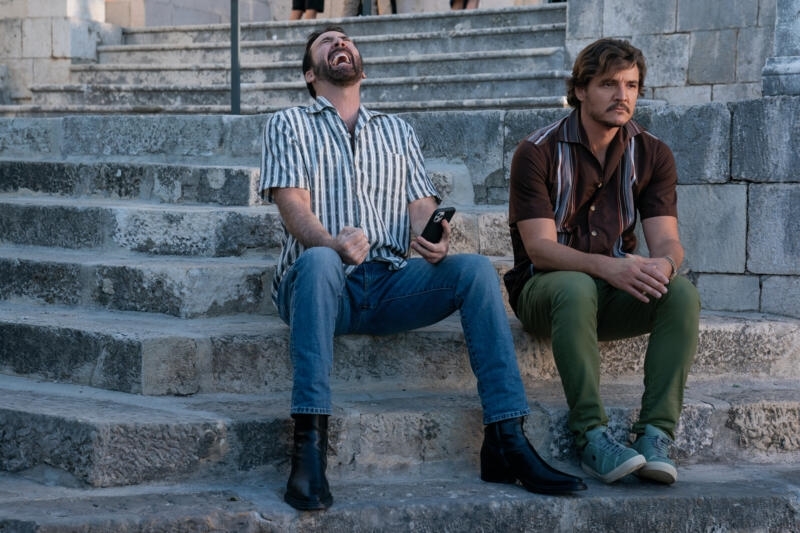 I hate sounding overly dramatic, but the first half of Tom Gormican’s The Unbearable Weight of Massive Talent almost instantly set off my second-hand embarrassment.

For a moment, I was worried it would affect my viewing for the rest of the film. I knew going into Massive Talent that it was going to be one giant, tongue-in-cheek meta joke. But fortunately, Gormican and his muse of sorts, Nicolas Cage, knew exactly what they’re doing with their picture.

As can be seen in all the promos for Massive Talent, Nic Cage is playing Nick Cage in a film about Cage. No, it’s not a documentary, and it’s quite clearly a scripted story.

We see Cage as an actor who was once a superstar and now struggling to land any kind of gig in Hollywood. This Nick Cage has a completely fictional wife and teenage daughter played by Sharon Horgan and Lily Sheen, respectively, while the actor’s real-life legendary showbiz dynasty (the Coppolas) aren’t acknowledged in the film.

But we get plenty of name-dropping, callbacks and references to Cage’s very real acting work.

To make it even more obvious, Cage’s alter-ego is fictional; his on-screen agent (played by Neil Patrick Harris) notifies him he’s been invited to an extravagant birthday party of a very wealthy fan in Mallorca, Spain. Pedro Pascal plays the fan, who actually has ties to arms dealers.

Massive Talent starts out as a self-aware comedy about celebrity life, with Cage even playing a CG de-aged imaginary version of his character in David Lynch’s Wild at Heart (1990), who represents Nick’s conscience.

Once we’re in Mallorca for the rest of Unbearable Weight, it’s a mix of a buddy comedy and a traditional action flick, a la Ben Stiller’s Tropic Thunder (2008). Gormican and screenwriting partner Kevin Etten don’t break a lot of new ground with their new feature, but it is amusing enough to spend 105 minutes.

Cage—though maybe predictable casting as a famous actor making fun of himself—pulls off the gimmick effectively. Pascal might be the best part of The Unbearable Weight of Massive Talent, with a pleasantly surprising amount of comedic timing.

If silly characters getting themselves into ridiculous situations to cartoony proportions is your bag, then you’ll probably get a kick out of The Unbearable Weight of Massive Talent.