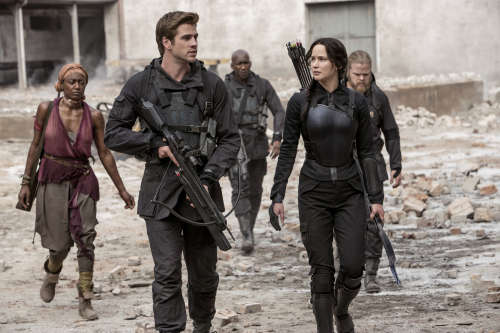 The most underwhelming, yet still most successful opening weekend of the year goes to the third installment of the Hunger Games franchise: Mockingjay, Part 1. Like most young adult series adaptations these days, the final book was cut in half to allow for the making of two films. While some blamed the bad weather around the country or the lack of promo from the studio, book fans have lamented splitting the story in two as unnecessary and disappointing. Still, the shortest of the movies so far, Mockingjay Pt. 1 has its pros and cons.

After Katniss Everdeen (Jennifer Lawrence) won and destroyed the Hunger Games in Catching Fire last year, she’s now numb and tired to the fact that District 12 has been turned to ruins. Under the impression that her co-champion Peeta (Josh Hutcherson) is dead, her childhood best friend Gale (Liam Hemsworth) is her main support. Desperate for a leader, the district’s President Coin (Julianne Moore) convinces Katniss to become the symbol, or “Mockingjay,” of the new rebellion.

Donald Sutherland, Philip Seymour Hoffman, Woody Harrelson and Elizabeth Banks reprise their roles from the previous films. Francis Lawrence’s second effort at Suzanne Collins’ series lacks action and adventure, and instead is heavy on drama and build-up. Though not boring, the film feels stretched to fill out its two-hour run time. The tension is there on screen, but so is a lot of filler. Lawrence and Hutcherson give their best performances of the series thus far, but Part 1 mostly leaves us wanting the second half—mission accomplished.

At the MoviesMegan Bianco
sharing