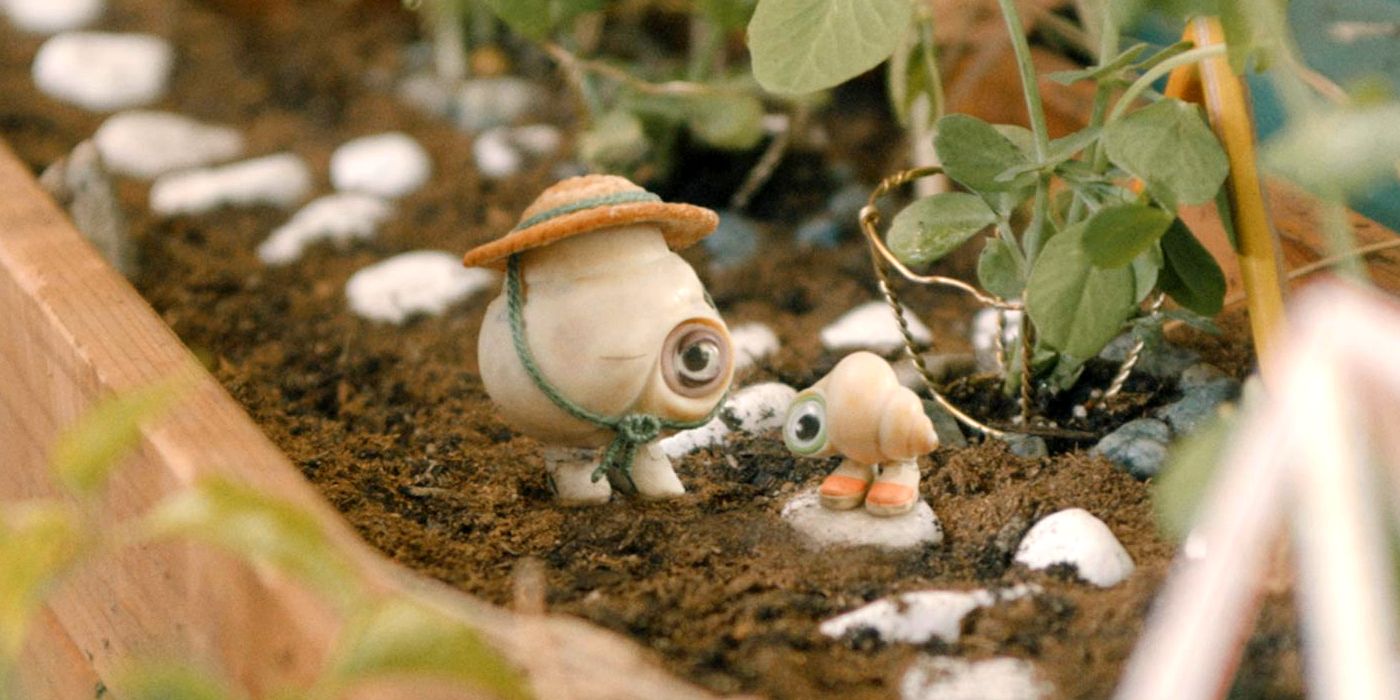 It’s fitting that during the same season that Steven Spielberg’s E.T. the Extra-Terrestrial (1982) is getting re-released, we also have a new movie with one of the most adorable, non-human characters on film since the friendly alien 40 years ago. Dean Fleischer-Camp’s Marcel the Shell with Shoes On, now in theaters, is my choice for best family film this year thus far, just behind Céline Sciamma’s Petite Maman. And it’s all because of a simple, sassy, animated seashell and a lovely voiceover performance by comedienne Jenny Slate.

In an Airbnb, a filmmaker/documentarian (played by Fleischer-Camp in a scripted version of himself) decides to film a stray, talking shell with a large eye, mouth and tiny shoes. The little object goes by Marcel (Slate), and he lives an ordinary life in the house, or as ordinary as life can be for a 1-inch-tall seashell. Along with Dean and Marcel’s grandmother Connie, or ‘Nan’ (Isabella Rossellini), Marcel takes the world by storm via Dean’s YouTube channel, social media and local news.

Rosa Salazar and Thomas Mann play a dysfunctional couple who owned the house Marcel grew up in, and Lesley Stahl of CBS’ 60 Minutes appears as herself and the host of Marcel’s favorite TV show.

Marcel the Shell originated as three short films (2010-14) by Fleischer-Camp and Slate—who were married at the time—and now excels with an official storyline and runtime. Like ET, Marcel just wants to be reunited with his family—or his “community” as the shell calls them—with the help of a new friend. The feature is a mix of a lot of things, while also being its own thing completely. The “mockumentary” style is clever, because we see 90% of the story through Marcel’s POV, and humans are almost always exposed peripherally. Fleischer-Camp’s meta input of casting himself and subtle referencing his own marriage aren’t too on the nose or distracting. The setting has elements of Mary Norton’s children’s book The Borrowers (1952) and John Roberts’ Paulie (1998), but it charms its way into viewers’ hearts through a new, modern take of social media attention and reminders of “the real world.” The use of stop-motion animation, rather than CGI, for Marcel, Connie and the other little creatures also makes the mood and atmosphere feel more timeless.

Along with an adorable, a capella cover of the Eagles’ “Peaceful, Easy Feeling” sung by the title character, Marcel the Shell with Shoes On is perfect for both families and adults this summer.