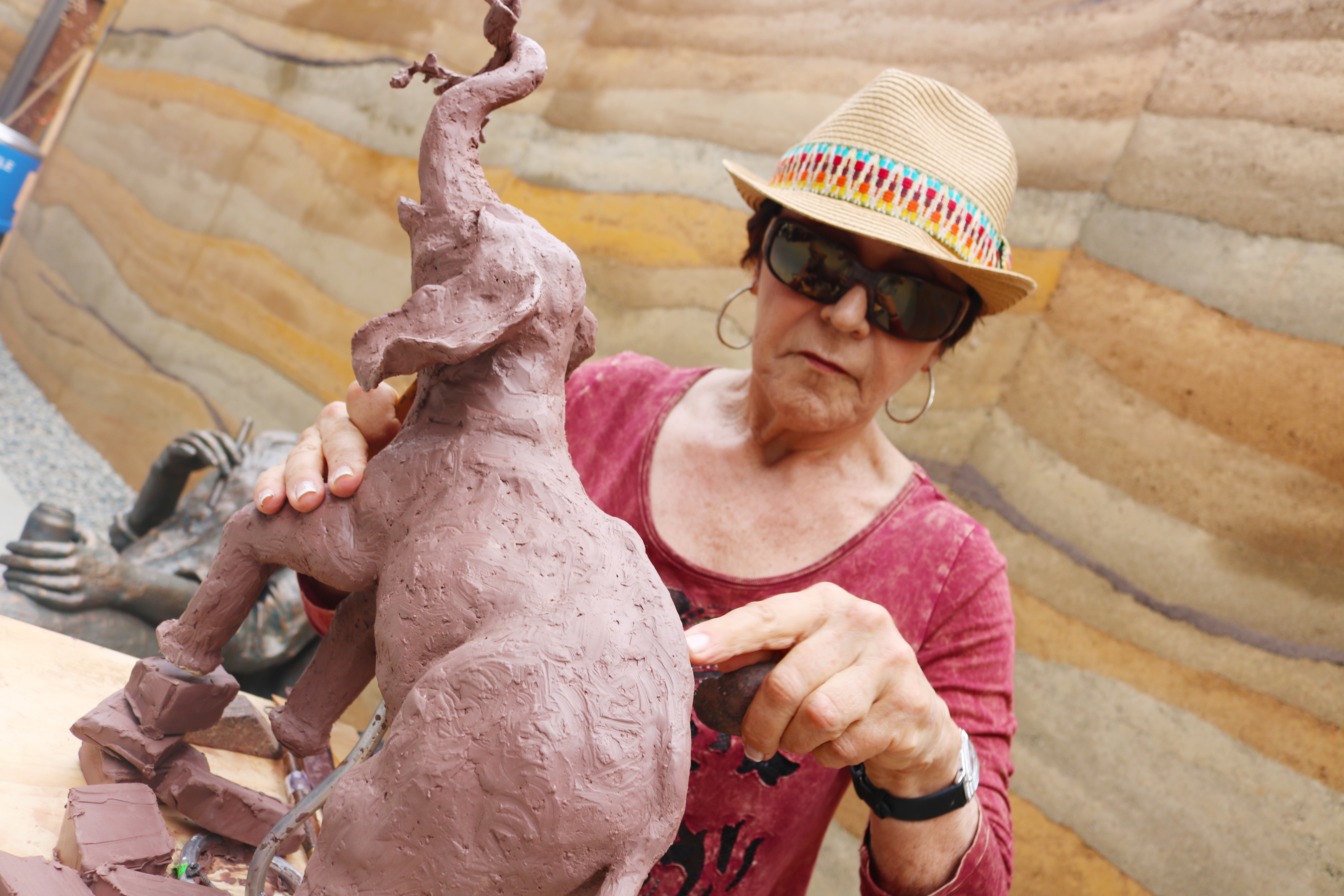 Arts in the Spotlight

A pair of Dana Point artists–one a sculptor, the other a photographer—have each taken a circuitous route to their first Laguna Festival of Arts exhibitions this summer. And both are looking to make the most of it.

Belle Tuckerman says being an aesthetician, working with skin, helped to encourage a passion for sculpture.

“It’s very easy to get involved with faces. I’ve worked with them all my life,” she said. “Bodies, as a massage therapist, I’ve worked on all my life. And as a kinesthetic learner, you learn through feel. It was so easy to move into three-dimensional art as a result of that. I’ve been preparing to this all my life.”

It’s also influenced her choice of subject matter, she said. Many of her subjects are faces, often with “extreme features” or a mixture of different physical attributes from different faces together.

She says she also prefers to keep to her own imagination.

“I almost never have a model, they just come out of my head,” Tuckerman said. “I don’t want to be bound by that person who’s right there. That’s going to restrict me. When I’m working, I may do something and all of a sudden say, ‘I don’t like that.’ I can cut it up and change it. I want that freedom.”

That also contributes, she says, to increasing her range, including animals and abstract work. Still, she said, she regularly returns to her “first love,” faces.

Tuckerman moved to Dana Point in 1980, opening a business on PCH and Silver Lantern called Body Mind, which she said was the “world’s first day spa,” where she developed a technique she dubbed the “facelift massage.” She ended up developing products and teaching the technique, as well as authoring a book. Eventually, she moved her practice to Laguna Beach before becoming an artist full time.

Tuckerman was a regular attendee of the Pageant of the Masters and Festival, but had always shown her own work elsewhere.

“I’d never thought to apply because I was always busy doing other things,” she said. “I was also busy with other art shows.”

Her learning process, she said, has primarily come from mentorships, studying directly with other artists. Her first teacher was in her 70s when she started and is now 100.

Tuckerman has recently exhibited in galleries in New York, Newport Beach and a number of others around Southern California. She has also worked with teachers at the Getty Museum in Los Angeles, as well as in Manhattan Beach and Scottsdale, Az.

“I’ve been very lucky to have found those people and to work with them,” she said.

Michael Duggan has lived a well-traveled life. And his photography, he says, attempts to bring some of the everyday objects from the places he’s visited to make them more real.

“Most of these are scenes you’d see just walking around,” Duggan said. “But I love graphical images, I love shadows, I love light, diagonals, textures. So when I’ve got a camera on my shoulder I’m walking around, going around corners, looking for things. I’ve got shots from all over the world, but often you wouldn’t recognize where they are. But there’s something unusual   about it.”

Sometimes, he said, what he shoots might be a typical scene in one place, like a fishing net splayed against a dock in Nova Scotia, but he sees something different.

“Up there, it’s an everyday scene, but when I see it, I look at the curves and I marvel at someone who made those iron rings or tied all those knots,” he said. “There’s a sense of what it’s used for, but it also has to appeal graphically, and look great on the wall.”

Duggan said he hopes people take away an appreciation for such objects they might find around them as a result. In the future, he said, he hopes to travel to Japan for a photo study on woodworking techniques used for temples there. Duggan, who is also a woodworker, said the woodworking there is more sophisticated than what’s found anywhere else in the world.

“There’s a graphical content to that kind of a study that appeals to me and gets people to think ‘What’s going on there?’ They get intrigued by the graphical image and then start to wonder what’s really happening within that,” Duggan said.

Having been taking pictures for more than 40 years, Duggan still regularly uses film and digital cameras. Film, he said, typically shows up better when blown up on the wall, but digital can be easier to work with.

Duggan said he’s enjoyed his inaugural experience at the festival. Like many exhibitors, he also works a full time job, teaching dentistry to international students hoping to pass their exams in the United States. Still, he comes down to Laguna Beach six days a week in the afternoons and evenings.

“I knew it was going to be a great summer. It’s just fabulous,” Duggan said. “The people have been fantastic. There’s a lot just loving art and having great conversations. I’m rotating a lot of pieces through and am getting a lot of feedback on what moves people.”

As part of a nationwide effort, the City of Dana Point will be participating in October’s National Arts and Humanities month, with a number of events planned that will focus on what’s already going on in the community, including at area schools.

“The idea is to highlight all the great work that’s already being done,” Arts and Culture Commission chair Berenika Schmitz said.

The commission is reaching out to both arts organizations, other nonprofits and businesses to schedule arts and humanities related events for the month, which would be compiled into a single schedule available to the public. The commission has set a deadline of Sept. 1 for events to be included in the program.