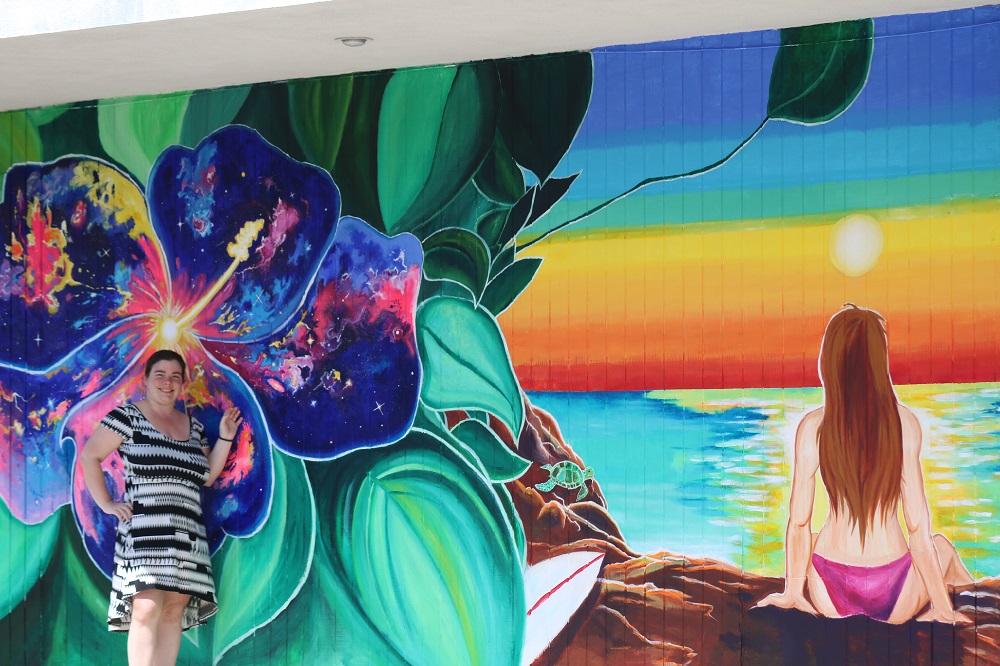 Editor’s Note: Dana Point Times will be spotlighting artists based in Dana Point or whose work is featured in the community. If you are an artist (musician, painter, sculptor, etc.) whose creativity contributes to the Dana Point community, or if you know of a candidate, contact Lillian Boyd at lboyd@picketfencemedia.com.

Marika Segal has been a San Clemente resident for nearly 25 years. She takes inspiration from galaxies and celestial bodies in her acrylic portrayals of people, flowers or objects. She debuts her first-ever mural this month at Kawamata Seafood in Capistrano Beach (26881 Camino De Estrella). Segal used crowdfunding to raise about $680 from family and friends, and she used Kickstarter to subsidize the mural. She says she’s received support and positivity from the Dana Point community and hopes to create more artwork for the city to enjoy.

Q: How long have you been painting, and how have your style and inspiration grown since first starting?

A: I’ve been inspired by galaxies in my painting since 2012. I went to Ireland for about five weeks that year, and I felt a really creative urge to paint again. My mother’s side of the family is from Ireland, and the trip really opened me up to being creative. I’ve been inspired to paint galaxies, nebulas and planets within humans, animals and objects. I have a simple, spiritual philosophy: we have infinite possibilities within us. I think that’s what I try to communicate through my artwork.

I’ve had to overcome major hurdles in the past. But no matter what we’ve been through, we have that infinite energy and infinite potential within us to heal and to overcome, regardless of our circumstances.

Q: What made you want to create a mural for the community?

A: Dana Point is starting to catch up with Laguna Beach with artwork in the community. I want to beautify the community and share my universe. I want to give something that the community can deeply enjoy. I’ve had nothing but endless support. As I was working on it, people were so excited that artwork was coming to their neighborhood. All the longtime residents were happy to see something new and fresh. It was nice to get that spiritual, mental support. Although there was no permitting process in the City of Dana Point, I felt their support when going through approvals, which I really appreciate as an artist.

Q: What inspired your mural on Kawamata Seafood?

A: In January of this year, I did some concept sketches as proposals for what the owners of the business and the building would like. We stuck with a Hawaiian theme in honor of their menu, and I incorporated my theme of portraying the universe within nature.

Q: What do you think a mural adds to the community?

A: Murals and artwork in the community uplift people and challenge the imagination. It helps people feel more positive about their environment. It shows progress, not just in a community sense but in a cultural sense. When people see new additions to the community rather than things falling apart, it makes people feel more optimistic about their presence and about their future. People walking by me as I painted would tell me that before, it was just a blank wall . . . but now my mural adds something exciting and new.

Q: Do you have inspiration for your next mural?

A: I have so many ideas. I’m open to ideas that other people have, whether it’s paid commission or getting funding like I did before with Kickstarter. But I have ideas to do more sea life or animals. I would love to paint on an even bigger wall, maybe things that may not have even come to me. I’m open to all the universe’s possibilities.