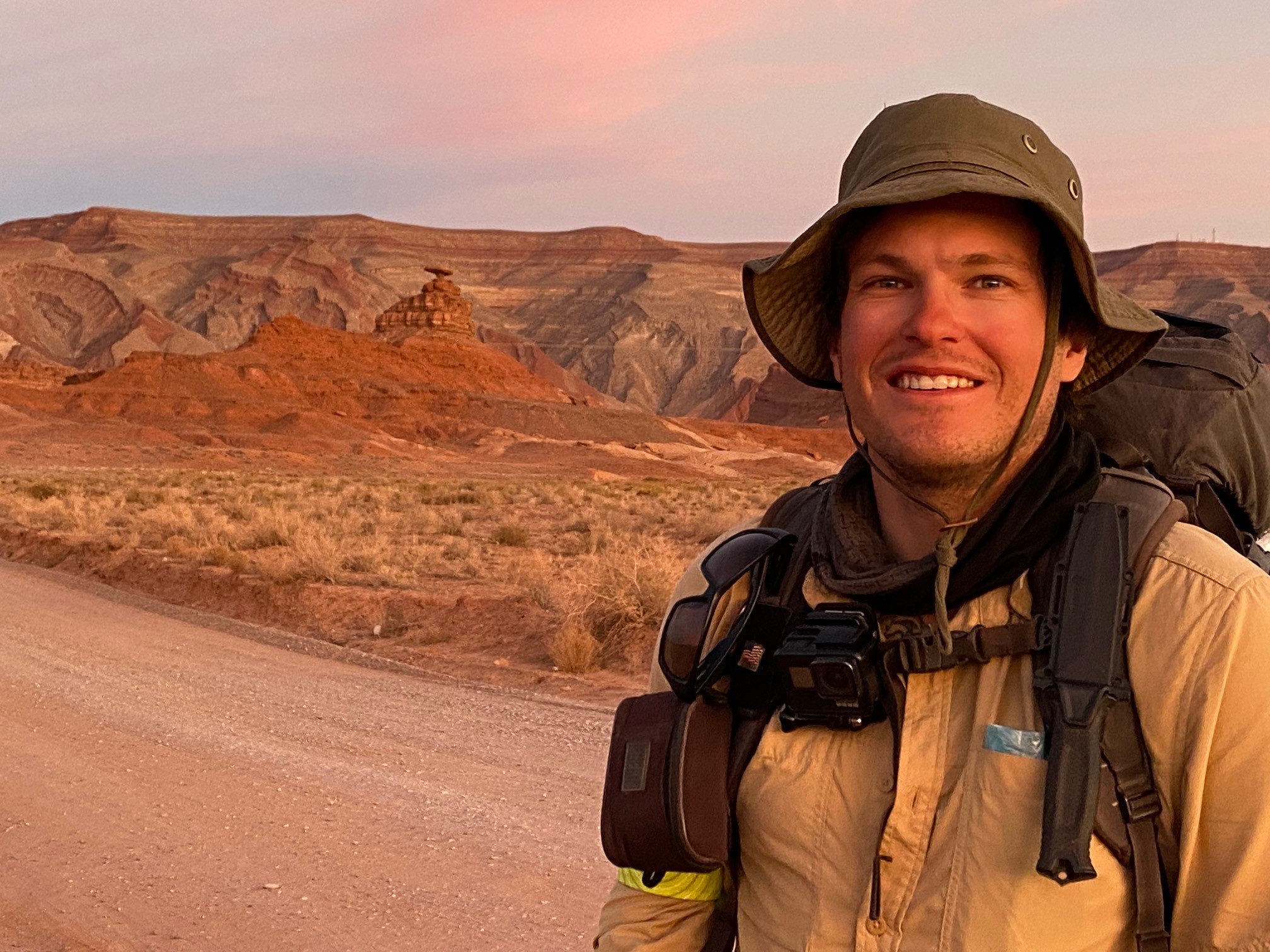 U.S. Army veteran Alex Seling, 33, will soon be returning to Dana Point after embarking on the American Discovery Trail, hiking more than 5,000 miles, coast-to-coast, to raise awareness and funds for veteran suicide prevention.

Seling, who is originally from Georgia, completed a yearlong deployment to Iraq, where he was an Army medic with the 25th Infantry Division, 2-27 Wolfhounds. He served three years in the military. Seling was always drawn to adventure, but once he returned to civilian life, he found that was absent from his life.

“I’ve kind of been starved for adventure,” Seling said.

After struggling with severe depression, anxiety, insomnia and suicidal thoughts upon returning from the military, Seling decided to hike the Pacific Crest Trail from Mexico to Canada in the hopes of gaining inner peace.

Long-distance hiking “just appealed to me; it just seemed like something extremely exciting and adventurous,” Seling told Dana Point Times this week, while taking a brief rest in Banning, California.

Seling embarked on the Pacific Crest Trail hike in the hopes of growing spiritually on his journey. He added that these hikes give him time to process everything that he’s been through and helps him approach challenges that come up in a new way.

“Whether it’s financial, or family or relationship struggles, I tend to face them differently; I face them with more confidence,” Seling said.

Several years after returning from the Pacific Crest Trail, Seling felt that he was once again starved for adventure, so he began a new one.

From his experience on his first long-distance hike, Seling wanted to raise money for other veterans to go on similar long-distance hikes. He dedicated his latest hike through the Southern Route of the American Discovery Trail to raise funds for Warrior Expeditions and Mission 22. As of Wednesday morning, Jan. 26, Seling had raised $6,565 of his $10,000 goal.

“I want to inspire vets to live their lives and go out and do awesome stuff like this,” Seling said. “I’m raising funds for Warrior Expeditions specifically so that veterans can go on adventures like this through (the organization). I found it’s so therapeutic for myself, and I really want to get the word out to other vets.”

Eighty percent of donations will go toward Warrior Expeditions, a nonprofit organization that offers long-distance adventure programs for veterans. The nonprofit gives veterans everything they need to embark on a long-distance hiking, cycling or kayaking trip.

“We support veterans with three- to six-month long, long-distance, bike, hike, and canoeing expeditions,” Warrior Expedition Director of Administration Angela Miller said. “And the idea is that they get these long durations out in nature, to really decompress to enjoy some camaraderie with their fellow veterans, which a lot of them miss after they leave the service; they get to meet a lot of other veterans and community supporters along the way. It really just gives them an opportunity to transition from their wartime experiences back into the civilian world.”

Seling said that Warrior Expeditions makes it easy for veterans to get trained in backpacking and helps them along the way through their own long-distance adventures.

Miller later touched on the thousands of dollars Seling has raised for the group through his hike.

“He’s going to help a lot of his follow veterans and we are really appreciative of his efforts,” she said.

The remaining 20% will go to Mission 22, a nonprofit organization that offers treatment and support for veterans struggling with post-traumatic stress, traumatic brain injury or depression, among other mental health issues. The organization raises awareness for issues that active servicemembers, veterans and their families face.

He set out on the hike more than a year ago in the hopes of crossing the Rockies and Sierras before snowfall. Though he hoped it would give him plenty of time to beat the snow, he said he just barely got through in time.

“I just really love the town,” Seling said. “It’s really beautifu,l and I just had a really good vibe from the place. It seems really safe, and everyone’s been very friendly. So, it just seems like a perfect endpoint.”

Seling was in Banning on Jan 25 and is expecting to reach Dana Point in the next week. He updates his YouTube channel with videos from his journey, and is collecting donations on his website: alexanderseling.com/the-hike.

Those experiencing a suicidal crisis or are in emotional distress can reach out to the National Suicide Prevention Lifeline at 800.273.8255 (TALK); Other resources include the Crisis Chat at didihirsch.org/chat; the OC WarmLine phone number at 714.991.6412; and OC WarmLine Live Chat at namioc.org.