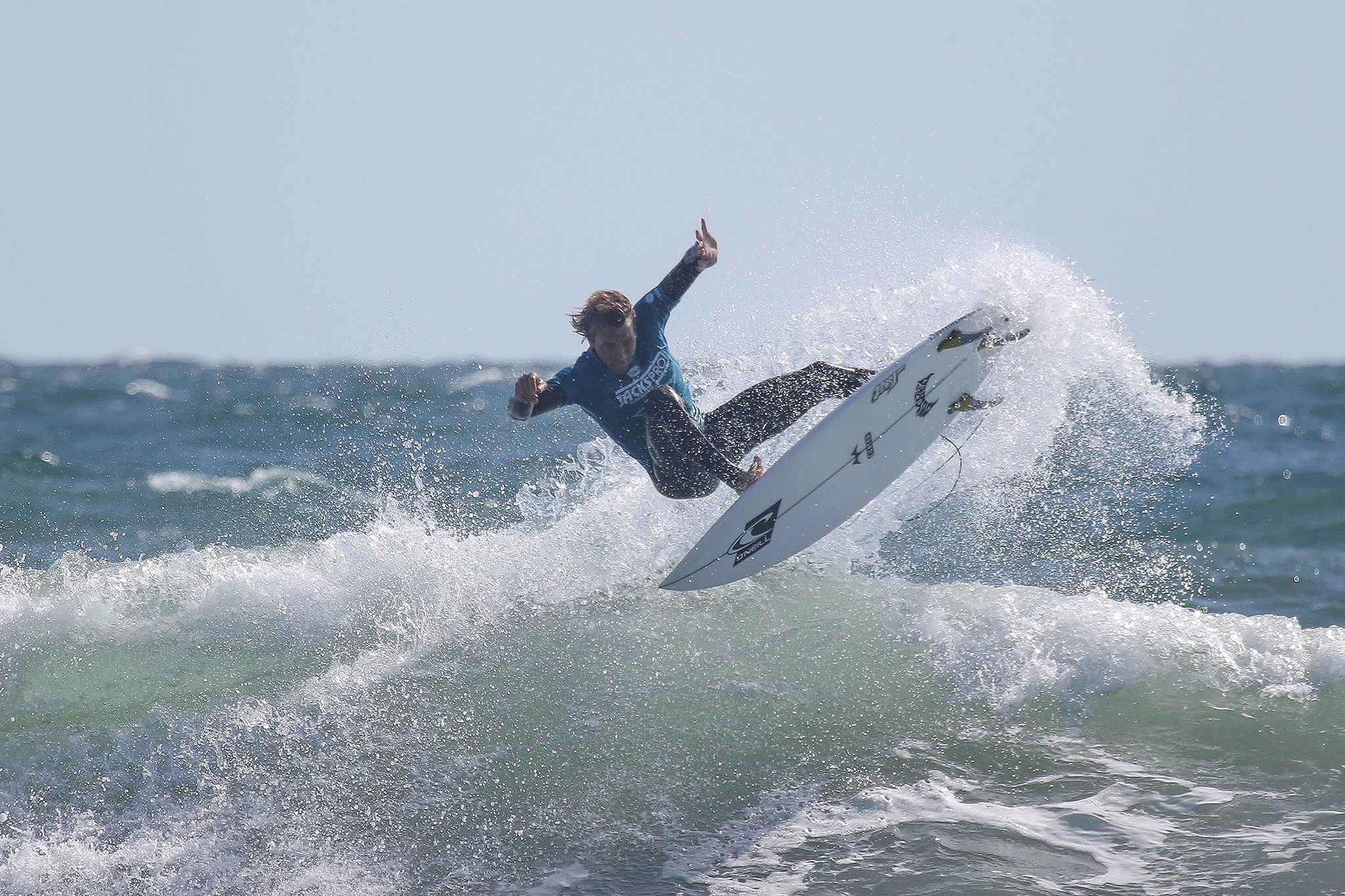 Another Weekend, Another Win: Kevin Schulz and Ian Crane go 1-2 at the Jack’s Pro in Huntington Beach

In surfing circles, the World Surf League’s Qualifying Series (QS) is often referred to as “the grind” because it’s, well, a grind. It’s the minor leagues of pro surfing in which several hundreds of the world’s best surfers all vie to graduate to the Championship Tour. It’s a dog-eat-dog affair that goes on for the better part of 10 months of the year.

The 2018 season is in full swing and the latest tour stop, the Jack’s Pro, landed in Huntington Beach last weekend. Held in challenging, wind-blown, knee-to-chest-high conditions on the south side of the iconic pier, there were some big names in the draw, and it was every bit the grind that QS contests are famous for.

Continuing with a familiar trend we’re seeing this year, San Clemente surfers’ presence was not lost on the competition. When the spray finally settled, it was Kevin Schulz standing atop the podium with Ian Crane happily cruising into the runner-up slot. For Schulz, it was the biggest win of his young career and his first-ever QS victory.

“I surfed a lot of heats today and I’m really tired, but I can’t stop smiling—I’m over the moon,” said 22-year-old Schulz when it was all done and dusted. “My whole family is here, and to have that final with Ian was great just to keep it in town. I couldn’t hear any scores with the wind, so I was free-surfing out there and I came in from the water to my family clapping, and couldn’t believe it.”

Maybe he should stop listening to the judges and surf more often because he went out and put on a blistering performance. Stomping the landing of a big double-grab rotation, the judges threw him a near-perfect 9.5 out of 10 for the ride. Schulz finished the final with an event-best 17.10 heat score (out of a possible 20).

“It’s so close to home. I grew up surfing here throughout the NSSA, and to win against the field that was here is just insane,” continued Schulz. “I couldn’t even dream of winning this thing. I feel like I didn’t peak until the final, and those leading up to it were pretty stressful, knowing I wasn’t doing my best surfing. But now I’ve got some points going and I want to keep this going to the bigger events.”

For Schulz and 24-year-old Crane it was a marathon day that saw them surf through five rounds of the contest.

“I didn’t take my wetsuit off once today and I’m definitely feeling it,” joked Crane at the end of the day. “There were a lot of big names in the event, and just to make the final feels pretty good. Pretty bummed I lost it, but it’s the first final I’ve ever made. I’m trying to figure out the more competitive side of surfing heats still and learning what to do after I’ve made some mistakes. I’m back into the QS 6,000s and QS 10,000s again this year and my goal is to be in that Top 10 by the end of the year.”

As if a pair of local surfers going one and two wasn’t enough, the Jack’s Pro also featured a specialty event for the West Coast Board Riders in which the San Clemente squad narrowly beat out Encinitas, Huntington Beach and L.A.’s South Bay. Featuring generations of South Orange County’s best surfers, in the end, it was Colt Ward’s last left down the beach that put San Clemente over the top. A big step forward for the West Coast Board Riders, the event was supported by the WSL and featured a live webcast.

From the surf club scene, to the Qualifying Series, to the illustrious Championship Tour, South Orange County is rolling at the moment.

The next big events to keep an eye out for are the Rip Curl Pro at Bells Beach, which will feature locals Kolohe Andino, Griffin Colapinto and Pat Gudauskas. The waiting period runs from March 28-April 8. Coming to Salt Creek on Saturday, April 7, the Dana Point Surf Club will be hosting the next installment of the West Coast Board Riders series.