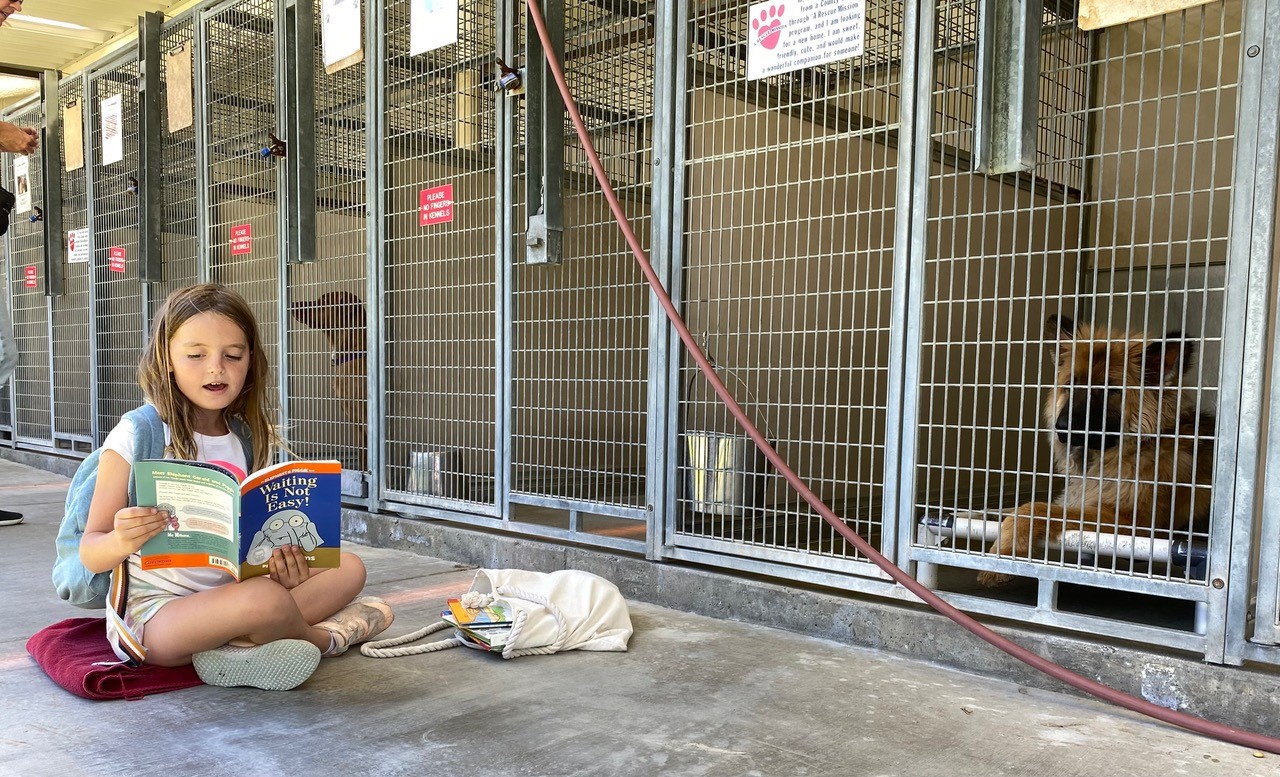 Life as a cat or dog in an animal shelter can be stressful, loud, and chaotic, but one local program is providing time to put their animals’ minds at ease.

The San Clemente-Dana Point Animal Shelter, in conjunction with the Pet Project Foundation, its volunteer arm, has for about five years run the “Calming Tales” program, allowing children to read books to the animals. The program started as a way to engage with the community more, provide access to young children, and help the animals inside.

“It does help them learn to be calm around visitors, a good skill in their transition to the home environment,” said CASA Supervisor Jen Stinett.

Since the word was initially spread about the program on social media and in city youth recreation magazines, the community has responded significantly. It continues to do so each summer, to where the program’s capacity is maxed out for all of the slots each week.

Animals, especially dogs, can be negatively impacted by the high-activity environment of a shelter, which can lead to various behaviors such as skittishness.

Stinett said that part of the shelter’s goal is to help the animals learn the skills and behaviors to best live as a pet at home, as most people don’t want their pets all over them at all times.

“You’re going to want to have some nice couch potato time, rest time with your dog,” she said. “And (the program) teaches these pets to have that calm time that (establishes), ‘It’s okay to kind of just lay down, and be quiet, and engage with someone that’s in front of you.’”

The children who participate also receive positive benefits. Reading serves as a quiet activity that gives time for them to get used to being around animals in general, or ones that differ from what they experience at home.

Stinett added that the program allows children to read out loud without the stressors of making a mistake such as mispronouncing a word. It helps even more that the pets are engaged and do actively listen.

“It’s without the feeling of, ‘You’re going to mess up,’ and, somebody’s going to make fun of you for it or something,” she said. “Obviously, our animals are just there to listen to them and it gives them more confidence in their reading out loud skills.”

Several children come back week to week, year after year, which makes for a significant endorsement and mark of the program’s success.

Stinett remarked that the adults sometimes arrive with more enthusiasm than the children, but that everyone appears to leave happy most of the time.

While there are multiple factors involved in determining available slots, the shelter normally hosts between 10 and 15 children weekly, a number that likely won’t change during the summer anytime soon.

The reading time occurs on Monday afternoons, as the animal shelter is closed to the public on Mondays. The program also interrupts the walking and exercise schedule, which Stinett said they want to impact as little as possible.

Adding more days would necessitate the shelter close to the public for that period in order to have the peace and quiet best suited for the program.

“We can’t have (the) public in and out, kind of walking around; it would disturb the whole vibe of what the program is all about,” Stinett said. “So … that’s why we haven’t expanded it.”

She did mention that the animal shelter is planning on expanding to the other months of the year. Starting in September, Stinett said, seniors will be able to come in on Monday afternoons to read books.

The summer session has already been filled, but the signup period for the seniors’ reading time will start toward the end of the season.

“We’ll have that information available soon, but they can email us to get more information about that program,” Stinett said.