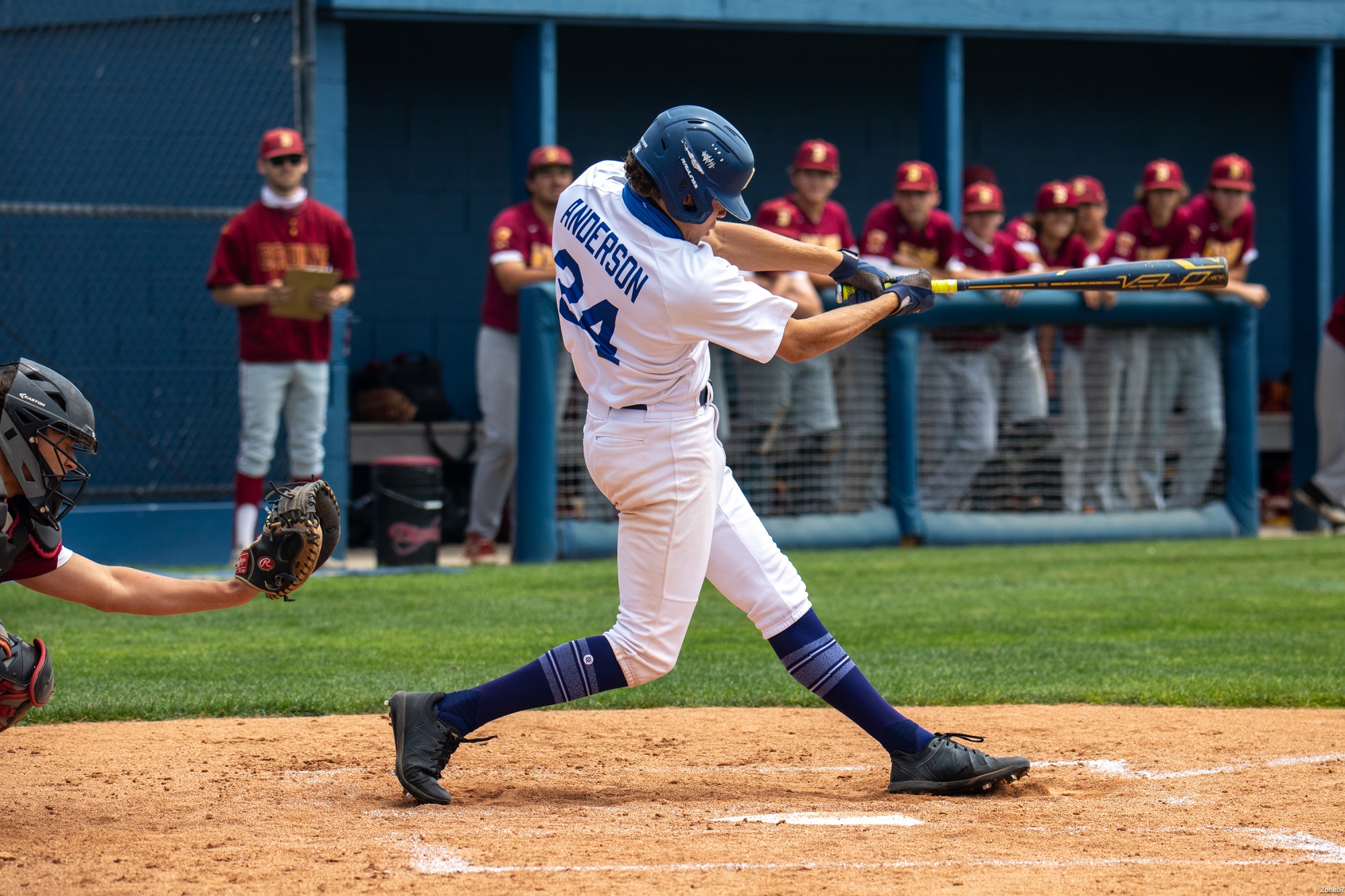 The baseball action on Wednesday, May 26 at Dana Hills High School was going to end by either an act of Mother Nature or by the hand of the Dana Hills or Mission Viejo baseball teams.

Fortunately for the Dolphins’ league title hopes, it was Dana Hills that found the game-ending thunder clap.

As darkness encroached in the bottom of the 14th inning, Dana Hills senior Aedan Anderson got a hold of one and sent it over the left field fence to break the nearly nine-inning-long deadlock with a walk-off home run, defeat Mission Viejo, 2-1, and keep the Dolphins alive in the race for the South Coast League championship.

“I was 0-for-5 or 0-for-4,” Anderson said, “and on the previous at-bat I got hit in the head by a pitch. Must’ve knocked my eyes right or something, because I was seeing the ball well. I was actually talking to the catcher about my girlfriend being here for all 14 innings and I want to go home. And that was it!”

Aedan Anderson launches one over the left field fence for a walk-off home run to end this double-game at Dana Hills.

Anderson sent everyone home and the Dolphins to the top of the South Coast League standings.

Thanks to an El Toro win over Tesoro earlier in the day, both Dana Hills and Mission Viejo officially clinched playoff berths with guaranteed top-three finishes in league. Tesoro’s loss also eliminated the possibility of a four-way tie for first place, which would’ve left Dana Hills as the odd team out on tiebreakers.

Now, with one game left to play, Dana Hills is on top of the South Coast League at 7-4. Capistrano Valley has no more games on the schedule and sits in second waiting for the season finale to play out. Mission Viejo is 6-5 and hosts Dana Hills in that finale on Friday.

If Dana Hills loses to Mission Viejo, it would create a three-way tie for the league championship. Based on playoff seedings tiebreakers, Dana Hills would be the league’s No. 3 representative and open the CIF-SS Division 1 playoffs on the road.

“Our goal has been to win this thing outright,” Dana Hills coach Tom Faris said. “We need to go in there Friday and figure out a way to do that. I think our guys are ready for that. It’s going to be another dogfight.”

In Wednesday’s battle, junior right-hander Garrett Leite picked up the win with no runs allowed on one hit in five innings of relief from the 10th inning onward. Leite had only pitched 2 1/3 innings all season before Wednesday.

Junior Grant Faris started the game for Dana Hills and allowed one run on four hits with six strikeouts over 4 2/3 innings pitched. Junior Bo Kelly threw 3 1/3 innings of relief with no hits, no runs and five strikeouts.

Mission Viejo starter Will Dagarin threw 111 pitches over eight innings of work and allowed one run on four hits with seven strikeouts. Junior Jake Tyler pitched out of a bases-loaded jam in the ninth inning and through to Anderson’s home run in the 14th inning.