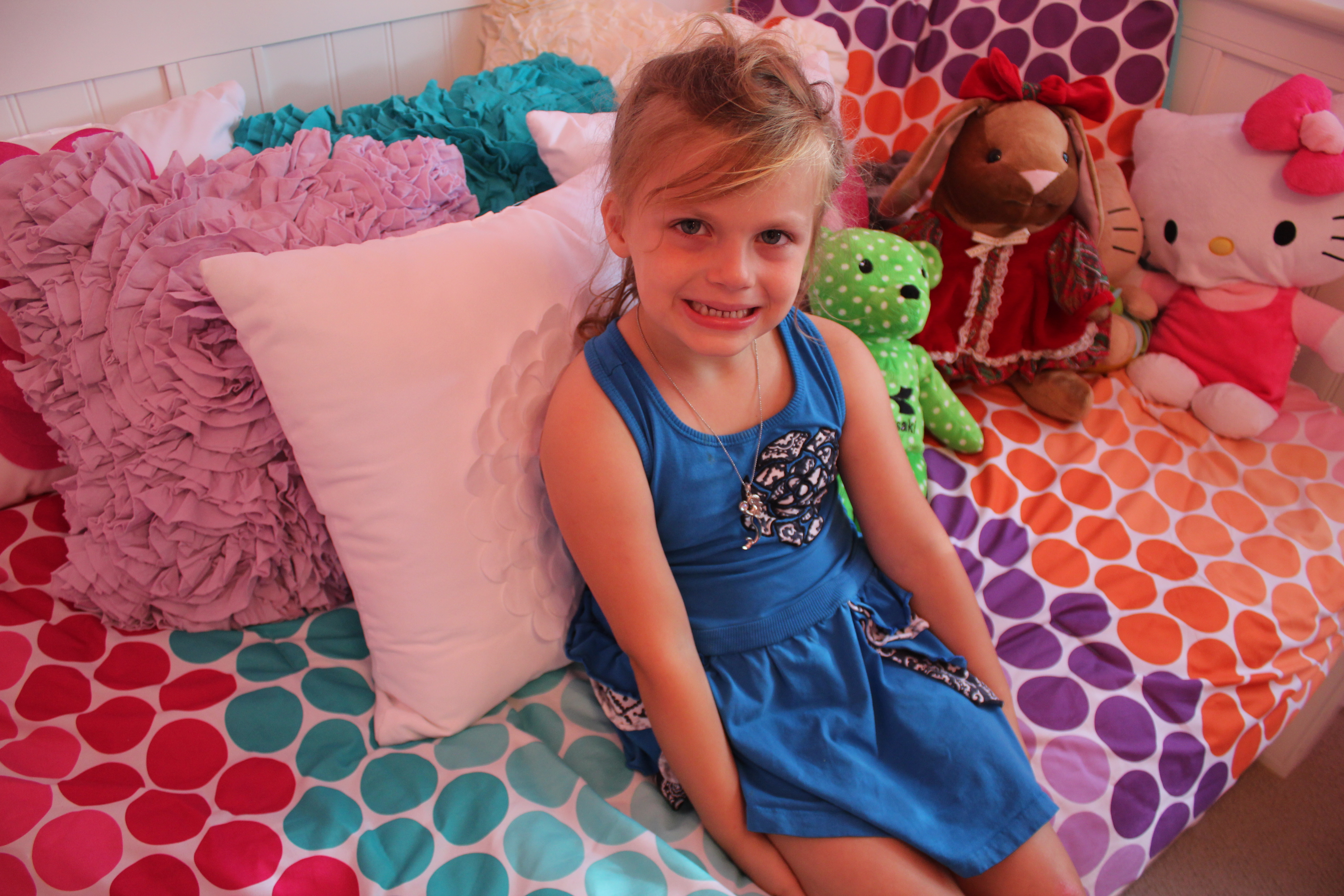 … And She Lived Happily Ever After

An hour earlier, Raelyn was surrounded by guests. Now, she is alone in her space, exploring each nook and cranny, examining every colorful toy, story-filled book, sparkling dress and family picture, feeling the materials and soaking in the new features of the bedroom created just for her.

There’s been a lot of change in her young life—one filled with experiences well-beyond her five years.

Raelyn was just 2 when she was diagnosed with acute lymphoblastic leukemia, a rapid-progressing cancer that attacks the body’s blood and bone marrow—the flexible tissue inside bones where red blood cells are produced. Raelyn’s parents took her to the doctor with a 104-degree fever that wouldn’t break. When medications didn’t combat what doctors believed to be a cold, and the young girl became lethargic, she went back. Several tests and office visits later, she was diagnosed. It was February 2012.

For just over two years, the young girl, nicknamed “Warrior Princess” by her father, battled the disease.

Her parents Greg and Rebecca Beckler by her side, Raelyn underwent monthly chemotherapy treatments at Children’s Hospital of Orange County, took daily doses of oral chemotherapy drugs, steroids and numerous other medications to fight off infections and mask side-effects of the treatment.

With high dosages of steroids running through her small body, Raelyn’s match with cancer took a hit when she suffered from bad reactions and developed a rare condition referred to as steroid psychosis.

The Beckler’s only saw the daughter they knew pre-diagnosis a few days out of the month. But through the spinal taps, chemo treatments, blood transfusions, bone marrow biopsies, x-rays and doctor’s visits, Raelyn showed her resilience, her fighter’s spirit, and her parent’s maintained hope.

In April, the warrior’s fight ceased when Raelyn completed her last round of chemotherapy treatments.

On Saturday, June 7, volunteers frantically rushed throughout the Beckler’s two-bedroom Dana Point condo, acrylic jewels and rhinestones were scattered about.

The family had been sent on an adventure, to a world built from a master’s imagination out of small, colorful plastic pieces. They headed out to explore Legoland for the day, with the promise of a big surprise waiting upon their return.

They moved quickly throughout the day. But as seen in cable television shows highlighting home refurbishments and makeovers, things fell together in the moments before the Becklers arrived.

It had taken since September to come to fruition, but the timing was finally right.

A Perfect Fusion of Forces

Denise Sutherland, a near 40-year resident of Capistrano Beach, found what she was looking for while watching “Secret Millionaire” on ABC.

It was spring 2011 and a Knoxville, Tennessee-based nonprofit called Special Spaces received a big, and generous, surprise. Founded in 2004 by Jennifer Swain, the all-volunteer organization helps create unique rooms, ones providing comfort and support, for children with life-threatening illnesses.

In this episode, it was Swain not the child that was handed the ultimate shock. A volunteer, later revealed to be millionaire entrepreneur Dani Johnson, donated some $50,000 to the non-profiteer and the family whose 5-year-old daughter was undergoing leukemia treatments. Sutherland was hooked.

She contacted the organization, and with the backing of her family, founded the Orange County chapter and embarked on the first local room revamping. Three years and eight room designs later, this grassroots, community-based organization is giving young children, forced to grow too up fast, a space they can call their own.

It’s the reason she brought Special Spaces to Orange County.

Sutherland’s brother, Marty Gentle, was 14 when he got sick. They didn’t know it at the time, but there is a genetic problem in the family with hypercoagulable states, creating a high risk for blood clot development. Her father and brother were both diagnosed with the condition. They died at 44 and 34, respectively.

“I honor his memory, because when he was sick … it was a time when pre-existing conditions weren’t covered. He was always financially devastated and people who didn’t know him stepped up,” Sutherland said. “When I saw Special Spaces, I knew this is what I was supposed to do.”

The timing of Beckler’s call was off.

Each year, from October to April, Sutherland takes a break and organizes finances, prepares tax forms and holds fundraisers.

The family had just missed the mark. But Sutherland promised, Raelyn’s room would come. The Beckler’s didn’t hold their breath and avoided telling Raelyn about the project, just in case in never did.

In March, forces came together and the reality of Raelyn’s special space started to form. Sutherland attended a meeting of the San Clemente Junior Women’s Club where local philanthropic organizations were awarded donations, Special Spaces was among recipients. After giving a presentation on upcoming tasks, including Raelyn’s room, Sutherland said she needed a designer for the Dana Point project.

As fate would have it, Paula Oblen was there. It was her second meeting as a member. She signed on.

Her Room, Her Space

As the Beckler’s arrived home, dozens of volunteers cheered. Right around the corner, a special surprise awaited. Shock spread across Raelyn’s face as Frozen’s Queen Elsa placed a crown upon her head. Her dropped jaw turned to a smile and the pair headed inside.

With Elsa in tow, Raelyn entered her room, her jaw dropping once again. She jetted throughout the room, examined the changes and even tested out the buoyancy of her new bed. And when the crowd had left and Elsa returned to Arendelle, she lied down, spread her wings and made her angel.

A little more than a week later, Dad reports Raelyn is sleeping in her own room for the first time since her diagnosis—one she’s kept in the same order Oblen, Sutherland and the other volunteers left it. She is also wearing a new title, that of big sister, to a baby brother who was welcomed into the world early Wednesday morning.

And her favorite room addition is still: “The cozy rug,” Raelyn says, “It feels like snow.”