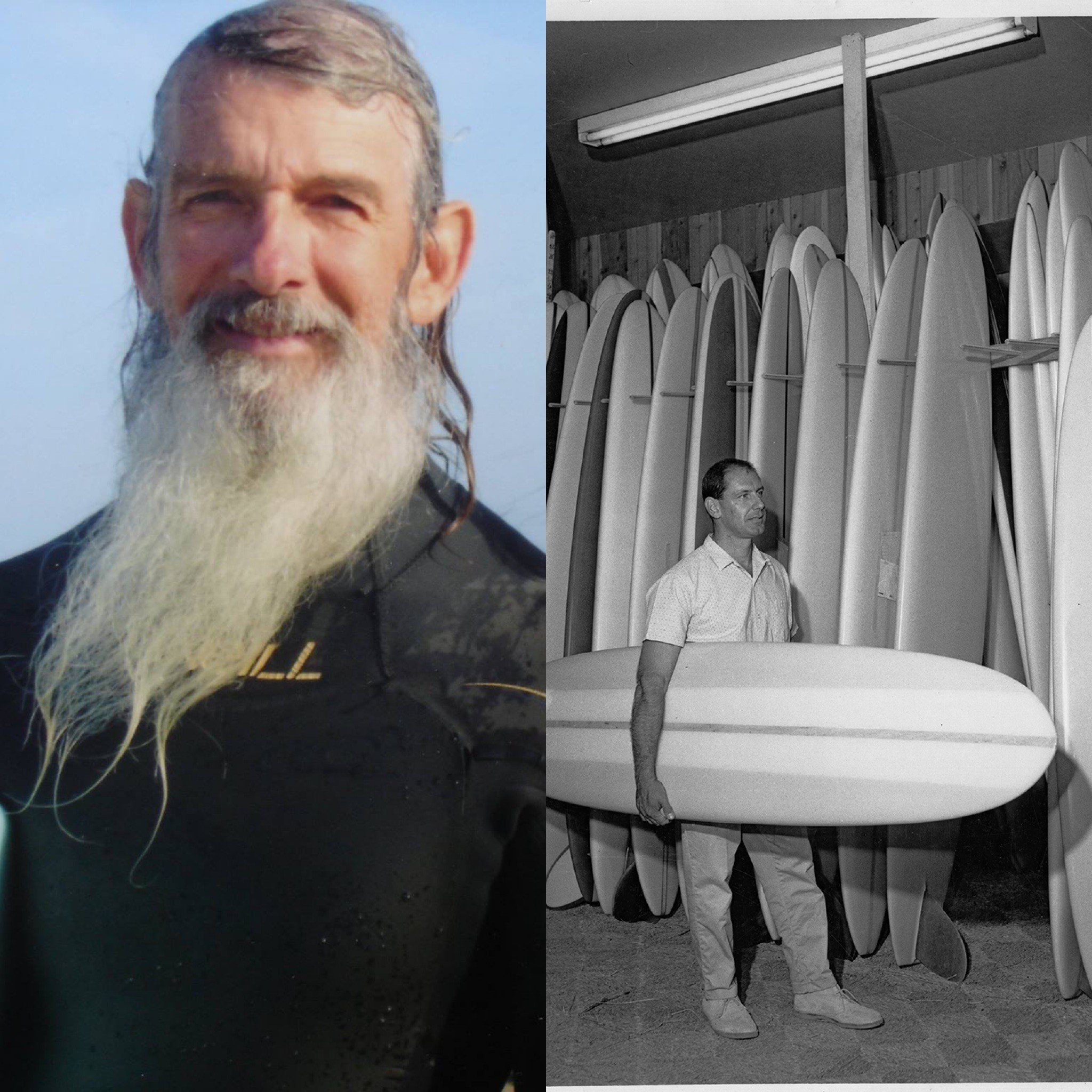 The local community of surfboard artisans and craftspeople is mourning the loss of two of its most revered members, as Brad Basham and Jim Gilloon have unfortunately departed this mortal coil.

By the time of his death, Basham had built an institution in San Clemente’s bustling Los Molinos “Surf Ghetto.” The owner and proprietor of Basham’s Factory and Surf Shop, Basham’s business was the hub of the board-building scene.

Selling everything from surfboard blanks to sandpaper to fin plugs for anyone who wanted to make a surfboard, Basham’s was the place to go for supplies. He rented out shaping bays where anyone could come in and whittle away.

A quiet, humble figurehead of the San Clemente scene since the early 1970s, he shied away from the spotlight, content to focus his energies on his business and making those around him better.

He’s remembered for his kindness and generous heart. Giving so many local shapers a place to launch their careers, it was because of Basham’s support and guidance that big-time shapers today such as Timmy Patterson, Matt Biolos and Tyler Warren were able to get their start.

“Every board builder to pass through San Clemente in the last 50 years, at least, had dealings with Brad. Most/all of us had either worked for, bought and/or borrowed/benefited from, or were just plain propped up and supported by Brad through the decades,” wrote Biolos on his Instagram remembrance.

“Brad was a bank,” Biolos continued. “He’d supply us with blanks for nothing more than a signature and a promise to pay. When Clark Foam closed down, I don’t think we ever got the old blank bill completely paid off. We’d ask for the invoice, and he’d cock his head and say, ‘Hmmmm, we will figure it out, some day.’ Later, we ran up a massive glassing bill, which he changed to a loan we paid back (with interest) over a decade. He really helped us.”

“I’ll never forget picking up the first board I shaped from Basham’s at 14 after they glassed it. Thanks for always having the time of day for me,” Warren remembered.

Basham died following an accident at his shop on Sunday, Feb. 20. He was 68. A makeshift memorial of flowers, candles and other mementos has been in the works at the Basham Factory.

Meanwhile, after a life very well lived, Dana Point icon Gilloon has gracefully kicked out. A friendly, popular character, Gilloon was a fixture in Dana Point’s lineups in the golden era before the harbor was built.

For a lot of area surfers, he sold them their first surfboards at Hobie Surf Shop. A longtime manager of the Hobie shop, he is revered as the “greatest surfboard salesman of all time.” It’s been suggested that Gilloon sold more surfboards in his career than any other person.

“My first job working in the (Hobie) shop was mostly filling up jars of resin and colored pigment and stocking T-shirts to be sold there,” remembered surf legend Corky Carroll in a 2018 piece for the Orange County Register.

“The shop manager was a very cool dude named Jim Gilloon. Jim was a local surfer and longtime part of the Hobie crew,” Carroll continued. “During busy times or when I was done filling and stocking, he would let me work on the floor doing sales.”

The stoke and kindness of both Basham and Gilloon will be very much missed. Respectively, they played critical roles in building and supporting the local surf communities that we know and enjoy today.

They both changed people’s lives for the better by helping them chase the sun and pursue their own vision of the surfing dream. Ride easy, guys; the next set waves are all yours.