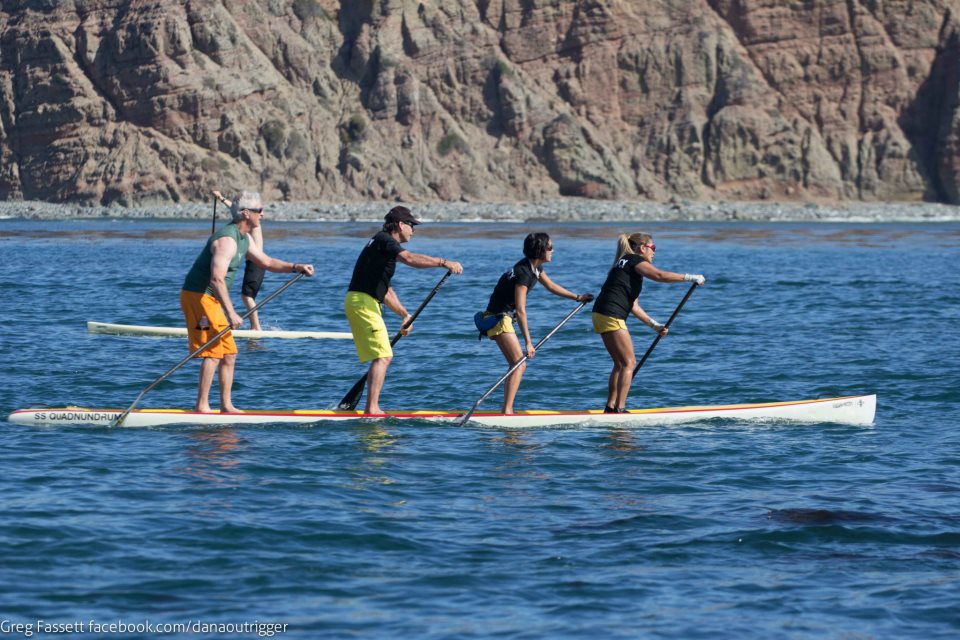 Steve Boehne of Infinity Surfboards and the the S.S. Quadnundrum

Steve and Barrie Boehne, of Infinity Surfboards in Dana Point, pull into the parking lot at Baby Beach within the Doheny Harbor with the S.S. Quadnundrum hanging over both sides of their full-size van.

Less interested in “getting by, with a little help from my friends” as the famed 1967 Beatles’ lyrics state, Steve and Barrie Boehne are interested in having fun, and going fast, with theirs.

At 21-feet long and over 33-inches wide, the S.S. Quadnundrum is the second generation of first-of-their-kind, multi-person stand-up paddleboards (SUPs) the Boehne’s have designed.

“My wife and I do everything tandem, so first I made a tandem SUP for us. We called it the Tandemonium,” Steve said. “When we found out that we could take one of her friends out on it too, we tried with her husband as well, but it was too short. That’s when I made the 21-footer. We found it to be really fast in races, and just really fun for a group workout. To my knowledge, it’s the only one of its kind,” Steve said.

To enjoy this pioneer of a product, the Dana Point Times was invited to the Harbor for a four-person ride to try out the board.

As we launched from the shallows at Baby Beach, the increase in thrust and top-speed, from four humans stroking compared to one, was immediately evident. Barrie, standing closest to the nose, counted strokes before instructing us to switch our stroke-side with a “one-two-switch-and-stroke” cadence. Steve steered from the far back position using a foot-pedal-controlled mobile rudder.

As a moderately experienced paddler, the S.S. Quadnundrum initially felt alien and slightly uncomfortable, but as our four-some stepped into a more cohesive rhythm, the long hull began to glide along the glassy conditions. The elongated rail-line held the water’s smooth surface, with the extra weight enabling the board to smoothly power through wakes.

This multi-person coordination is a defining feature of what the Boehne’s see as a new take on classic tandem-surfing.

“I could make more, but I haven’t had the requests. At 21-feet long it’s kind of intimidating to most people,” Steve said, explaining the origins of the fiberglass board, the foam “blank” of which had to be ordered from Texas. “I’ve made around a dozen 19-foot tandems that can take up to three people that are being used across California, the East Coast and in Europe.”

Stand-up paddleboarding is often praised for its mass appeal due to enabling a large demographic to enjoy a variety of natural elements and physical exercise. The degree of difficulty is left entirely up to the user’s discretion. With inventions such as the S.S Quadnundrum and other pun-infused, multi-person stand-up paddleboards, Steve and Barrie Boehne are putting a fresh spin on a time-honored tradition.

To learn more about the S.S Quadnundrum and other multi-person-paddleboard options, visit Infinity Surfboards at www.infinitysurf.com. Infinity is located at 24382 Del Prado Ave, Dana Point.