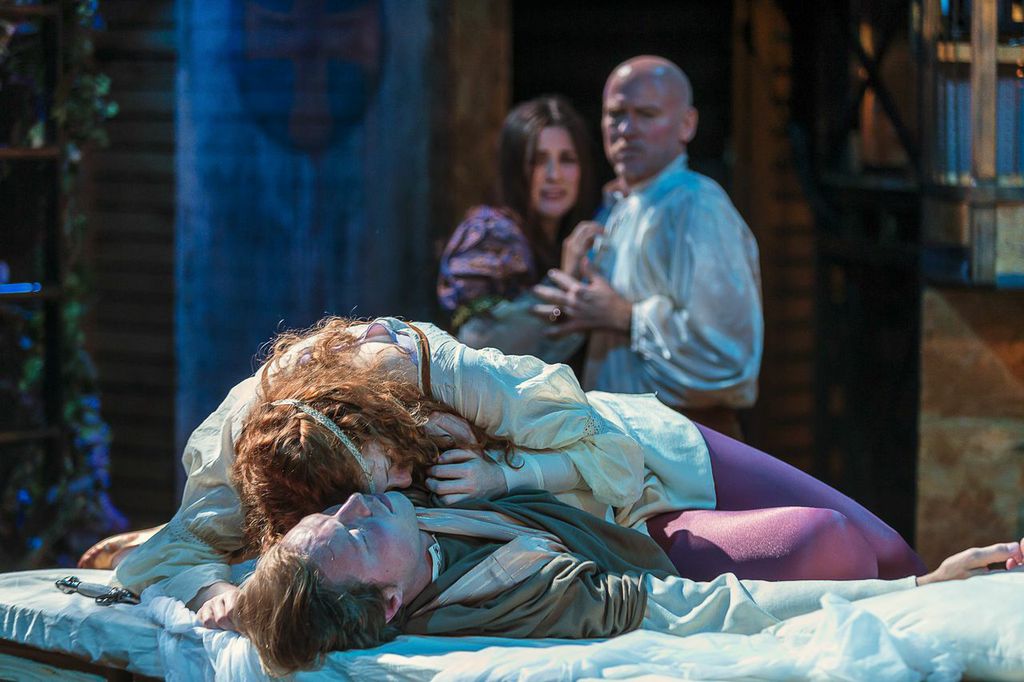 “As rich shall Romeo’s by his lady’s lie; Poor sacrifices of our enmity!”—Lord Capulet in William Shakespeare’s “Romeo and Juliet”

Spoiler alert: If you don’t want to know the ending of Shakespeare’s Romeo and Juliet, stop reading now.

As the lifeless bodies of the young, star-crossed lovers of Romeo Montague and Juliet Capulet lie together their long-feuding families realize, all too late, the true repercussions of their hostilities.

It is a tale that has been told time and again, both on stage and silver screen. From adaptations with young Hollywood elites Leonardo DiCaprio and Claire Danes to a parody featuring traveling lawn figurines—Gnomeo and Juliet voiced by James McAvoy and Emily Blunt—Shakespeare’s great love affair lives on.

Now, a regional theatre production is reviving the tragedy in the way the English playwright and actor intended the play to be seen. The New Swan Shakespeare Festival presents “Romeo and Juliet,” as well as “Twelfth Night,” throughout the month of August.

The festival’s third season, Orange County’s only professional Shakespeare festival performed outdoors, opened July 10 with the classic lovers’ tragedy. Shows run most nights in August on the New Swan Theatre stage, a 16-ton, moveable and reinvented Elizabethan Theatre made of recycled materials. The theatre holds just 125 people and is set up in the heart of the UC Irvine campus.

Stevens, a longtime resident of Dana Point and theatre professor for the Riverside Community College District, believes locals are thirsty for an experience like this.

“Shakespeare is in the water supply,” he said. “People don’t realize it but they speak the way they speak because of him. He had such an influence on the English language.”

This educator and board member of the Dana Point Theatre Company, which along with the city of Dana Point brings the yearly Shakespeare in the Park series to fruition, is serving that proverbial Shakespearean water to audiences Aug. 21 and 22 as Lovin’ Shakespeare comes to Lantern Bay Park.

For those two nights, Stevens will direct a small cast of six former students as they recreate Shakespeare’s famous scenes and sonnets, all with the underlying theme of love.

He hopes audiences will walk away with a new awareness of the man who shaped so much of the language they speak and the stories they know. And much like the Montagues and Capulets who reconciled only after the deaths of their children, Stevens hopes locals, who may be overwhelmed by the thought of Shakespearean theatre, come to appreciate the work sooner rather than later.

For New Swan festival ticket and performance information, visit www.newswanshakespeare.com. And find out more about Shakespeare in the Park at www.dptheatreco.com.

Lovin’ Shakespeare in the Park

WHAT: The city of Dana Point in partnership with the Dana Point Theater Company presents the annual summer series, Shakespeare in the Park. This year’s performance is a composition of Shakespeare’s timeless work, from scenes to sonnets, with the underlying theme of love.