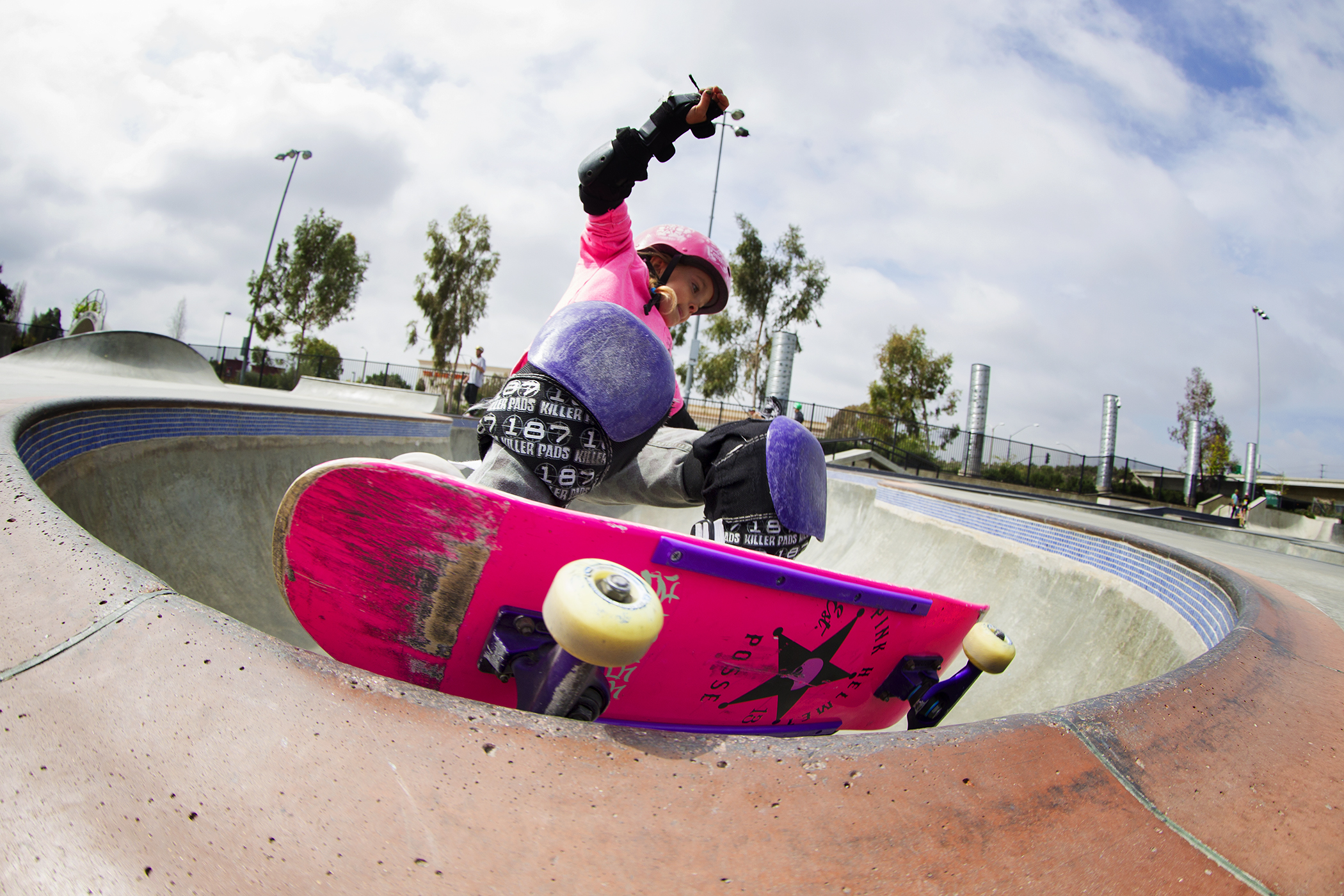 A Safe Place to Skate

By Steve Breazeale and Andrea Papagianis

Teaching kids to skate and providing a safe place should be an easy thing in Southern California, at least that’s the way one organization pushing for a skatepark in Dana Point sees it.

Much like parents teaching their children to toss a baseball, Jason Kenworthy wanted to teach his kids to skate.

With boards in hand, 5-year-old Bella and 3-year-old Loyal took to Strand Vista Park. Atop straight, flat surfaces overlooking the Pacific, Kenworthy taught them the fundamentals. Learning to push, the brother and sister skated back-and-forth while sporting pads and helmets.

One day this stopped.

Signs posted at all 23 of Dana Point’s city parks state the rules. No biking, no skateboarding.

“We did that for weeks and one day a cop pulled up and came down and told us we weren’t allowed to skateboard there,” Kenworthy said. “The officer was embarrassed. He was like ‘I can’t believe I have to do this … but the sign clearly says it and somebody called and said you were skateboarding.’”

Southern California is the birthplace of skate, surf and stand-up paddleboarding. For beach and non-snow-requiring action sports, this is the epicenter. It’s where the world turns for trends, where professionals were bred, said Skatepark of Dana Point movement organizer Brandon Phillips.

It’s also where Kenworthy got his start.

The longtime resident of Dana Point grew up at Doheny and Salt Creek. He moved to Rhode Island where he advanced as a surfer but returned to graduate from Dana Hills High School and the town where better weather and waves reigned. He skated the streets years before the city incorporated. Kenworthy has made his career in action sports.

As a photographer, Kenworthy has traversed the globe, capturing images of professional surfers and documenting each element of their lives. His photos have adorned more than 50 international magazine covers and Kenworthy was a dominant force in the establishment of Nike’s surf team.

But outside of work, and more important than his career, Kenworthy is a family man and father.

Kenworthy loads up his van each week with his children and others who want to skate. They go to Encinitas, Carlsbad and Oceanside in northern San Diego County and travel to any one of the 18 skateparks in Orange County.

However, the problem he and Phillips see is that kids in Dana Point, Capistrano Beach and surrounding areas don’t always have that option to find a safe place. Through the community-driven Skatepark of Dana Point movement they’re trying to change that.

Now more than ever, the Orange County skate community is rallying behind stakepark efforts.

Early Sunday morning, 16-year-old Logan Wells was struck by a car while skateboarding in Yorba Linda, according to authorities. Wells was transported to an area hospital where he died.

From a preliminary investigation, authorities believe Wells was in a traffic lane when he was struck, said Orange County Sheriff’s Department spokesman Lt. Jeff Hallock. Investigators do not believe alcohol or excessive speeds played a factor in the incident.

The local community has now rallied in hopes of providing kids a safe place to skate.

The Twitter hashtag “#skatepark4logan” quickly took root Monday and an online petition asking the Yorba Linda City Council to “Build a skate park in honor of Logan Wells” had gathered more than 15,000 signatures by Thursday morning.

An incident like this has weighed on the minds of residents like Phillips and Kenworthy’s for years.

Dozens of skateboards and brightly-colored helmets were lined up outside City Hall for the March 18 Dana Point City Council meeting. The gathering area outside of council chambers was bustling.

More than 50 skatepark supporters came together with a common mission in mind: a skatepark in Dana Point. Each filled out a comment card and a stack was handed off to the city clerk. When public comments opened, six had the chance to address the council.

Speakers emphasized Dana Point’s role as a center for surf and skate. They highlighted the ways action sports drive local economies and give kids options, and an outlet, where they can thrive. For Skatepark of Dana Point, it was a lesson for kids to do things the right way: to respect authority and the process.

So far they’ve spoken before the Youth Board, Planning Commission and City Council. Their item has yet to be agendized, but Skatepark of Dana Point organizers are not deterred.

It’s all part of a conversation that comes up every three to four years.

The city first entertained the idea of a skatepark 10 to 14 years ago, said Kevin Evans, the city’s director of Community Services and Parks. Extensive research and community outreach initiatives were done.

Despite the occasional park push, the facts remain the same: the city’s 6.5-square miles are built to capacity, revenues are slowly returning to pre-2008 numbers and resident opposition persists, Evans said.

“As of right now it doesn’t appear that any of the critical factors have changed since the last time we looked at this proposition,” Evans said in an email. “The city has accepted the fact that we just don’t have space available to accommodate a skatepark.”

Phillips and the Dana Point skatepark movement believe they are involved in a discussion that is not only focused on funding and space. Instead, they believe there is a larger, more fundamental issue they have to overcome in order to accomplish their goal—changing public perception.

When Phillips and Nick Gates, a longtime Dana Point resident and graduate of Dana Hills High School who now oversees the etnies Skatepark of Lake Forest, were growing up in the area, skateboarding culture was evolving. Skate magazines like Thrasher, the concept of skate videos and the lifestyle associated with it were all brought to the public attention in an increasingly mainstream fashion.

A lot of those early images and ideas were centered on a counter culture involving loud music, brash style and an in-your-face attitude. Skateboarders were deemed outcasts by many.

Gates can remember going with his mom to the Dana Point Harbor in the early 1980s. She would go off to an exercise class and he would bring his skateboard, hoping to cruise along the scenic beach and skate Dana Point’s most popular skate landmark, the Richard Henry Dana Jr. statue. Gates, along with his fellow skaters, were told to get off public property.

In the years that followed, skateboarding has become a legitimate career option for thousands of teens who chose not to play traditional sports. Pop culture figures like Tony Hawk, Bob Burnquist and Eric Koston eventually had their own shoes, clothing lines, picked up sponsors, made millions and were featured in video games.

It is the promise of cultivating a skill that could one day turn into a career and doing it in a safe, community-oriented environment, that Skatepark of Dana Point activists like Ben Classen rally behind.

“The City Council’s job exists to support the community and what we are prepared to show them is there is a large section of the community that they are flat out ignoring,” Classen said.

The problem in Dana Point, Classen says, is the skater not being allowed to practice his craft in a public place, like any sprinter or soccer player out on an open field can, without being profiled.

“The stigma is what we are addressing here. That’s the beginning of it, in order to get support. Kids are growing up and want options to skate safely and not be criminalized for it,” Classen said.