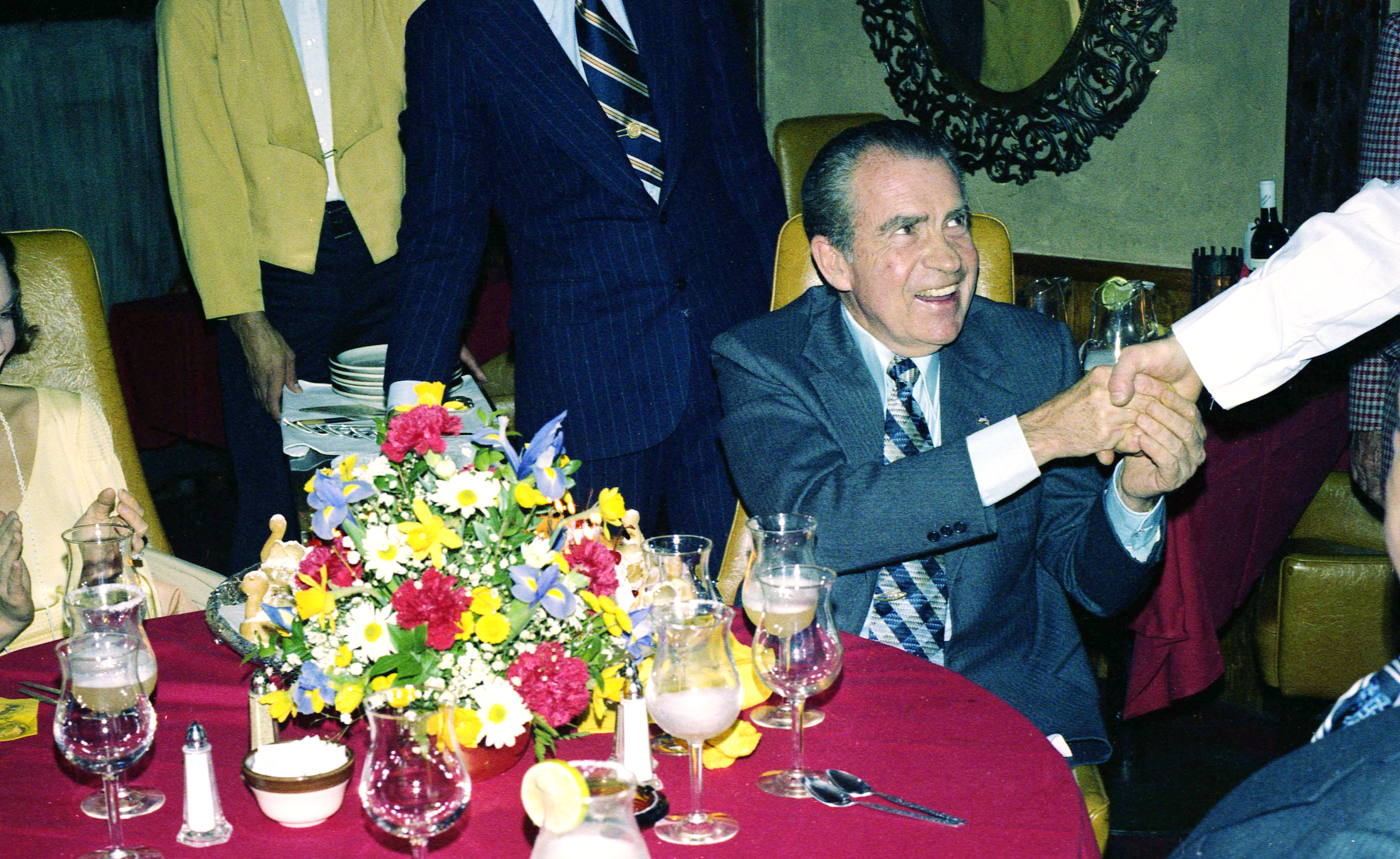 The vice president of the United States saw the presidential election go to John F. Kennedy by one of the narrowest of margins in history. More than 68 million ballots were cast, and when all were counted, Nixon lost by some 113,000 votes. The Electoral College vote read: Kennedy 303, Nixon 219.

Cries from Republicans rang, urging Nixon to contest the results. It’s something he didn’t do, but that night, after watching election coverage from a suite at the Ambassador Hotel in Los Angeles, Nixon, along with his military aide, Air Force Maj. James Hughes, took a drive

“They drove down to the Mexican border, just to get away from the anxiety,” Brennan said. “They stopped at the El Adobe for lunch.”

That lunch began a relationship that would last throughout Nixon’s presidency. It also set the stage for a long-contested local rivalry over which south Orange County restaurant was the president’s favorite.

A Mexican Eatery, Thanks to Nixon

Nixon’s time in San Clemente helped put the city, and the area, on the map.

Then-President Nixon moved his personal home to San Clemente in 1969. La Casa Pacifica, a mansion situated above Upper Trestles, became the Nixon family’s part-time residence and was dubbed the “Western White House” during his presidency.

With the president at Casa Pacifica, staffers set up temporary homes at the San Clemente Inn, with Secret Service members housed in a hotel across from the restaurant where Molly Bloom’s Irish Bar & Restaurant now stands. Nixon, and his staff, first moved into San Clemente, around the time of St. Joseph’s Day, and the traditional return of the swallows to San Juan Capistrano, Brennan recalled.

“We toured the Mission and went to the El Adobe,” Brennan said of the restaurant owned then by Ed Cornwall, who invited the president in for lunch. “(Cornwall) capitalized on President Nixon being there,” Brennan said. “They got an awful lot of publicity … We went there several times.”

Steve Nordeck became managing partner of El Adobe de Capistrano in 2002, after he was called on by owner Richard O’Neill, the late patriarch of the Rancho Mission Viejo landowning family.

Nordeck, a former mayor of Manhattan Beach, has managed a handful of restaurants in his post-politics career. All of them, he notes, have come with some historical charm. Most of the stories he’s heard of Nixon’s affinity for El Adobe have come from others, including the tale of when the restaurant truly became a Mexican eatery, thanks to Nixon.

El Adobe was Nixon’s and his staff’s go-to choice for catering special events. When Soviet Premier Leonid Brezhnev visited the Western White House in 1973, Brezhnev’s staff stayed at the San Clemente Inn, El Adobe catered and the menus were translated into Russian.

A Great Honor to Serve the President

Maria Olamendi doesn’t remember the first time Nixon walked through the doors of her family’s restaurant, but his last visit is one she’ll never forget.

It was early 1994, around six months after Nixon’s wife of 53 years, Pat, passed away the day after their anniversary. Nixon would follow his wife in death less than one year later. They were both 81.

Months before his death, Nixon visited Olamendi’s one last time. He looked frail, Maria recalled, but his appetite was hearty. Nixon ordered a quesadilla and a No. 15—a combination plate complete with a chile relleno, enchilada, taco, tamale and a side of rice and beans. He didn’t stop there, desert soon followed.

“Every time he came he ate something different,” Maria said. “But he liked the Pollo a la Veracruzan, it’s a chicken breast cooked in a tomato sauce with olives and jalapenos.”

Looking at the Olamendi’s menu today, the item’s description includes a nod to the former president. “It was Don Jorge’s great honor to prepare and serve this dish especially for President Nixon,” it reads.

Maria and husband Jorge Olamendi opened their family eatery in 1973. Located off El Camino Real in San Clemente, Olamendi’s, coupled with The Bird Cage bar was a local hot spot. The restaurant moved locations three years later to a Coast Highway locale where it’s remained for the last 37 years.

“Those were special years,” Jorge Olamendi said of the year’s he served the man he calls a friend. “It was really nice, because we saw the different times in his life, from the most powerful man in the world, falling down and then getting back up.”

Nixon returned to San Clemente after resigning the office of the presidency on Aug. 9, 1974. With the help of Brennan, daughter Julie and husband David Eisenhower, grandson of Dwight D. Eisenhower, moved to a home nearby, located off of Capistrano Beach’s Beach Road.

It was Brennan who introduced the president to Olamendi’s after happening on the restaurant’s then-new location, just down the road from the Nixon-Eisenhower home.

“I went there on my own and discovered what I thought was a great place,” Brennan said. “I told the president that.”

A Post-presidential Return to Normalcy

As the dust settled on the Watergate scandal, Nixon withdrew to his San Clemente home.

Out of office, the Nixon’s attempted a return to normal life.

Nixon stayed at Casa Pacifica most mornings but typically spent his afternoons golfing at Shorecliffs, Brennan said. Surrounded by Secret Service agents, Brennan and Nixon took to the links, where other golfers took note and waited for an opportunity to shake Nixon’s hand.

“Everyone was very pleasant too, which was good for his morale,” Brennan recalled. “We played often and we played very, very rapidly.”

And while her husband was on the course, Pat Nixon found refuge in her garden. She also made frequent trips to local shops, and the couple made the occasional trip out to eat, especially when Julie lived nearby.

Like many restaurants that have ever hosted a president, El Adobe marks Nixon’s seat, in the interior balcony, with a special plaque. On the menu, the popular “President’s Choice,” features several items Nixon was known to enjoy: chile relleno, chicken enchilada, shredded beef taco with rice and beans.

As a son of California, Nixon liked Mexican food but no more than any average person, Brennan said.

“He was from Southern California, and it’s the best Mexican food in America,” Brennan said. “That’s why he’d usually say ‘Let’s get Mexican food.’”

On his last visit to the restaurant, Maria Olamendi paused and said, “Thank you so much for coming to our place.” She recalls he paused and replied, “You don’t need to thank me. I love the food.” He excited the building but returned a few moments later to personally thank the staff and chefs in Spanish.