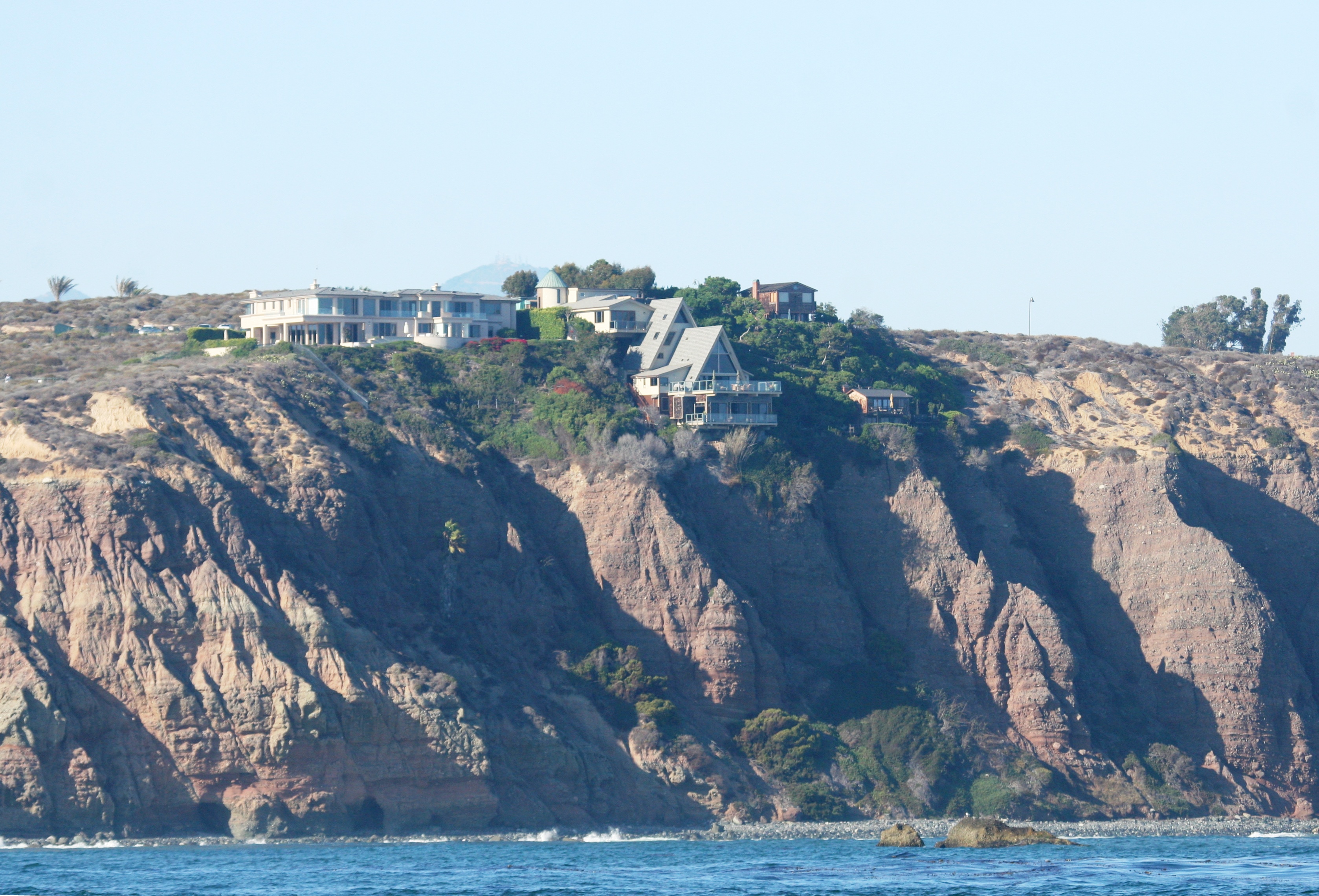 Ben Day recalls sailing out of Dana Point Harbor back in the 1970s and using the iconic A-frame house clinging to the Headlands cliffside as a mariner’s reference point while tacking and other maneuvers. Never did the thought cross his mind that the landmark house might someday be his, or that it might become a historic landmark.

On Jan. 12, as co-owner with his wife Michelle, and Boyd and Carol Plowman, the group received designation by a unanimous vote of the Dana Point Planning Commission of the oldest part of the property as a historical structure.

The property—known as Cook’s Point for the former owner and builder Ron Cook—consists of two distinct but connected homes.

The double A-frame, designed by TM Engineers & Architects and built in 1957, was placed on the city’s Historic Resource Register, becoming the 39th structure and the only example of mid-century modern design on the list.

The home has four levels all offering expansive views of the Pacific. Its interior design, although not befitting the term mid-century modern as its exterior does, can best be described as an eclectic mix of nautical folk art, stained glass and antique fixtures, mixed with modern and Asian influences.

The home’s design—both inside and out—was clearly meant to enhance the local marine environment. Upon entering, one almost gets the sense of being on a boat, with its incorporation of porthole windows and railings salvaged from the ship Queen Elizabeth I, along with other nautical decorative features including brass stations, lanterns and a carved wooden figurehead displayed near the tip of one of the A-frames’ ceiling beams.

One of the 39 spots on the city’s historic register was granted to a ship—the Curlew—for its nod to the maritime history of the area. The Cook’s Point A-frame now joins Curlew, strengthening the preservation of that part of Dana Point history.

Ron and Marion Cook lived in the house—accessible via a rather steep path from the top of Scenic Drive down to the front entryway—until the ’80s. According to stories from the Cook family that came along with the present owners’ 2004 purchase of the home, as Ron and Marion got older and began having difficulty getting up and down the path, Ron built a second French Normandy-style home on the blufftop. The two structures are connected at the pinnacle of the top A-frame, and thus technically considered a single-family dwelling.

The Days live in the double A-frame and the Plowmans in the upper French Normandy house.

The Planning Commission also recommended to the City Council that the structure be granted participation in the Mills Act Program—a state law that allows city governments to grant owners of historic buildings a reduction in property taxes in exchange for an agreement by owners to provide ongoing preservation of the structure.

According to the agenda report prepared for the Cook’s Point application, the city had an inventory of historic structures done in 1997 to document buildings associated with Dana Point’s early development, potential candidates for historic designation. The Dana Point Historic Architectural Resources Inventory identified a total of 75 qualifying structures—60 residential and 15 commercial—and rated them by level of historic significance.

The granting of historical resource designation of buildings in the survey is dependent on a structure being at least 50 years old and meeting at least and additional two of 10 requirements, listed on the ordinance as (A) through (J).

At the time the survey was done, the Cook’s Point double A-frame had not yet reached its 50-year mark and was therefore not included. For buildings not on the register, an application for inclusion must be submitted, along with meeting the half-century age requirement and the meeting of two other criteria.

The Cook’s Point A-frame request was granted based on its age (J) as well as its importance as a key focal point adding to the “visual quality or character” of an area (A) and (G) its illustration of the “development of California locally and regionally.”

Planning Commissioner Norm Denton said its place among the city’s protected historic structures was well earned as it was built pre-California Coastal Commission and such a structure on a coastal cliff would not be allowed today. There will also never be anything else like it as the Headlands has been designated a nature preserve.

“I think another thing that struck me about the house is that as an early beach property it’s iconic to Dana Point,” Denton said. “By sea it is nothing short of a landmark. When many people think of Dana Point they think of the Headlands and the home is a big part of it. Architecturally it is very historic, with huge beams and other features you don’t see in modern construction. The families that own it now have taken very good care of it and I think they deserve the designation.”

Barbara Johannes, Dana Point Historical Society president said her group first featured the house in its annual home tour in 2004, when it was in escrow between the Cook family and the present owners. By 2011 it had been refurbished by Eric Guenther of the Whim Design Studios in San Juan Capistrano, in a manner that preserved much of its original nautical design features and antiques, and was again featured in the home tour.

“In 2011 we first encouraged the Days and the Plowmans to apply for historic designation for future protection and preservation,” Johannes said. “Our preservation committee feels very strongly about its significance to community history, its status as a landmark and its importance as the first 1950s-built example of mid-century architecture to receive the designation.”

Michelle Day, an artist, said she was attracted to the house right away, due to Cook’s nautical painting and wooden sculpture of a painter displayed high in the ceiling’s pointed vault, as well as the stained glass and ocean views.

“Getting the historic designation was very emotional because we have appreciated this house so much and wanted to save it for the community by giving it validation as a truly historic property worth saving,” she said.

Ben Day was also pleased and noted that although the four property owners are planning on putting it on the market soon—to simplify and move on to homes with less maintenance and not so many levels as they near retirement—the years spent in the home solidified their desire to protect it as it is passed on to new owners.

“It’s going to be hard to leave but we think it’s time to move on,” he said. “It has been an exciting phase in our life, but it’s a very big responsibility to maintain a home on the ocean at our age.”

With the recent uptick in new development permits applications in the city, Historical Society members and other concerned citizens have been advocating for an updated historic resources survey to be made, in order to prevent the inadvertent demolition of as yet unidentified historic structures.

John Tilton, city architect and planning manager said that is something his staff is currently working on.

“We have solicited bids from three different qualified sources and are reviewing them now,” Tilton said. “As far as a time-frame for the survey, it would first have to be included in the city budget which will not be reviewed until June. Assuming we get approval for its funding, it could happen as soon as the second half of the year.”

“A mid-century modern building downtown—where Bella Bazaar is now located—is being torn down as a part of the Majestic development,” he said. “I think many people haven’t come to fully appreciate mid-century architecture. A lot of people who grew up with it have a concept of it as ordinary, not historic. But now that some of us are historic ourselves, it’s getting a new appreciation having passed the 50-year mark.”

Dana Point’s Historical Resource Designation ordinance is dependent on a structure being at least 50 years old (J) and meeting a minimum of two other criteria as listed below:

(A)Buildings, structures, or places that are important key focal or pivotal points in the visual quality or character of an area, neighborhood, or survey district.

(B) Structures that help retain the characteristics of the town that was 50 years ago.

(C) Structures that contribute to the unique urban quality of a downtown.

(D) Structures contributing to the architectural continuity of the street.

(E) Structures that are identified with a person or persons who significantly contributed to the culture and/or development of the city, state, or nation.

(F) Structures that represent an architectural type or period and/or represent the design work of know architects, draftsmen, or builders whose efforts have significantly influenced the heritage of the city, state, or nation.

(G) Structures that illustrate the development of California locally and regionally.

(H) Buildings retaining the original integrity of and/or illustrating a given period.

(I) Structures unique in design or detail, such as, but not limited to, materials, window, landscaping, plaster finishes and architectural innovation.

(J) Structures that are at least 50 years old or properties that have achieved significance within the past 50 years if they are of exceptional importance.