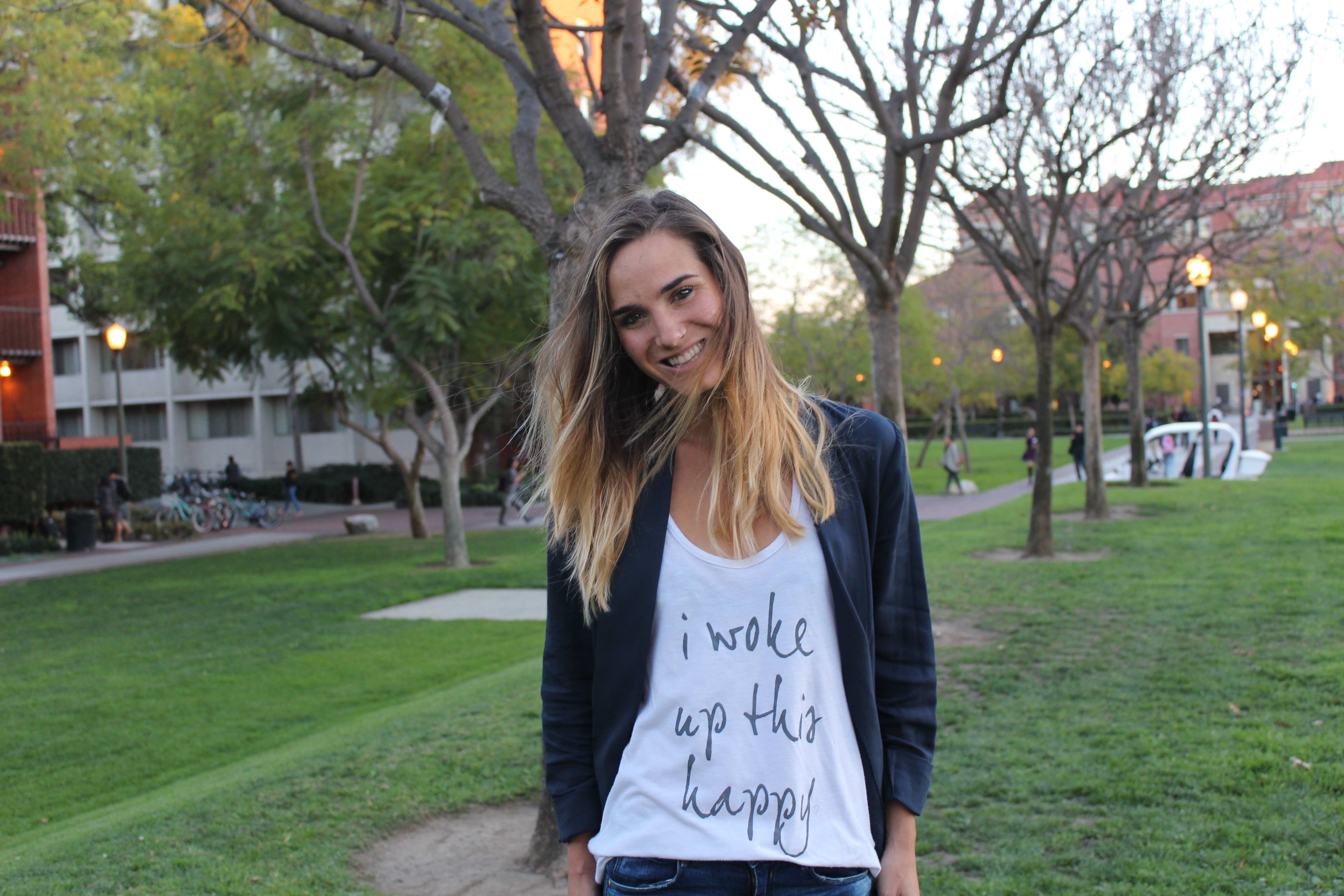 Happiness. For most, it’s a simple feeling made complex by the infinite possibilities of its origin and ways to reach it as a destination.

For Heidi Burns, a 26-year-old Dana Point native, and her social enterprise apparel company, Project Happy Hearts, happiness isn’t just an important thing, it’s the only thing. It’s her vision, her message and her life. And the question she asked herself while recovering from surgery for a congenital heart defect—what makes your heart happy—is the premise upon which it was built.

Burns’ company sells a line of clothing sporting messages of happiness, grants wishes to children with congenital heart defects (CHD) and donates a portion of proceeds to CHD-related organizations.

Burns’ own CHD has, at times, made happiness difficult to achieve. Despite this, her desire to live life and spread a message central to finding what makes one happy has only grown stronger.

Born at Children’s Hospital Orange County, Burns was on a private jet to Boston Children’s Hospital just five days after her birth. There she would have open-heart surgery after being diagnosed with transposition of the greater vessels, a form of CHD in which the two main arteries carrying blood away from the heart are reversed. At the time, Burns was only the 100th baby to have an arterial switch operation, or “switch” surgery, at the only hospital in the world that had been successful in the procedure.

According to American Heart Association, about 32,000 children, or eight out of every 1,000, are born with a heart defect each year in the United States. Over 1.3 million Americans alive today are afflicted with a form of CHD. The Children’s Heart Foundation reports the incidence of CHD in children a bit higher at one out of 100, or 40,000 per year. Despite these numbers, Burns still feels awareness for CHD is far too low.

“I 100 percent do not think it gets enough attention,” Burns said. ”And to be honest, I didn’t know those numbers until I started Project Happy Hearts.”

Because resources and information available to parents of children with CHD are lacking, her goal, she said, is to raise what she feels is much needed awareness.

After her first surgery, Heidi spent the following years living a normal life, aside from her annual visit to the cardiologist. She traveled, became a national champion gymnast and ran cross-country at Dana Hills High School. At age 17, however, she began having pain in her chest.

“I was running track and literally keeled-over and thought I was having a heart-attack,” she said. “I called my dad and we went to the emergency room … I literally thought I was going to die.”

For the next eight years, the doctor’s visits continued and the pain would occasionally reappear. Burns graduated from Dana Hills in 2006 and attended college at Cal Poly San Luis Obispo. At the age of 25, it was determined she would need a second open-heart surgery.

That surgery, in 2014, involved the removal of her heart from her body during the procedure to undo a myocardial bridge, a condition in which one of the coronary arteries tunnels through the myocardium—the middle muscular layer of the heart wall—instead of resting on top of it.

“Going into the second heart surgery, I packed a bag for the hospital because I was scheduled to be there for a week,” Burns said. “I packed all black clothes thinking I was going to die.”

Waking up from that surgery, Burns said, forever changed her life and who she is as a person.

“When I woke up, I was happy,” she said. “I just decided at that moment I wanted to live a life that was just the best life ever.”

That moment of “waking up happy” became the main impetus for Project Happy Hearts.

The company started as a social media campaign, featuring pictures of people holding signs asking the question, “What makes your heart happy?” In August 2014, Project Happy Hearts launched its first T-shirt design reading “I woke up this happy.” Since then, the company’s online sales have grown considerably. Happy Hearts shirts were also available locally, for a time, at Camellia Boutique in Dana Point.

Though based in Los Angeles, Burns would like to see the company—both the clothing line and grant program—become as prevalent in Dana Point as possible.

“Dana Point is my home base,” Burns said.

Burns runs the company as its CEO but has recently brought on Lily Rhodes, also of Dana Point, who updates the company’s blog, maintains its newsletter, prepares events and assists in day-to-day operations.

Twenty percent of the company’s profits are put into a fund donated monthly to organizations researching, raising awareness and providing support for CHD patients. The website includes a “give back” feature where supporters can give directly to some of the organizations in any amount. Though the primary focus now is on the clothing line, manufacturing other projects through partnerships with major nationwide corporations, including a customizable gift that would be available on site for hospital patients, are in the works.

“We’re looking to partner with some cool give-back companies, Burns said. “We have a lot in the pipeline.”

Project Happy Hearts has also begun a “grant a wish” program, which makes a personal connection with families and children facing CHDs. One of the program’s first beneficiaries is Dana Point’s Jeremiah Verhines.

Verhines, 13, suffers from Wolff Parkinson’s White Syndrome, a type of CHD in which there is an extra electrical pathway between the upper and lower chambers of the heart, causing a rapid and irregular heartbeat. The condition went undiagnosed until Dec. 27, 2014 when he suffered sudden cardiac arrest while spending a night at home with his family. After an 11-hour surgery, having an Automatic Implantable Cardioverter Defibrillator installed in his chest and starting medication that controls his heart rhythm, Verhines has begun the healing process. Due to having gone 13 years with an undiagnosed CHD however, he developed a murmur and cardiomyopathy, an abnormality of the heart muscle, and will require further surgeries. Burns and her company have been with the Verhines along the way.

“Project Happy Hearts has been wonderful to Jeremiah. They surprised him with a new snowboard, boots and bindings a couple of days after he got out of CHOC. Heidi is such a blessing and her story has given my son, and us as a family, hope that our youngster can live a happy, active life,” said Verhines’ father, Jeremy Verhines, in an email.  “Her cause brings happiness and joy to all of those she touches. Project Happy Hearts brought some cheer when Jeremiah needed it most.”

Jeremiah Verhines has a Facebook page, Hope for Jeremiah, to track his progress and raise funds to help with his medical bills.

Now pursuing a Master’s degree in social entrepreneurship at the USC Marshall School of Business, Burns hopes to continue to grow her company as well as expanding its outreach to other families by broadening her social media presence and holding more community events for awareness and fund-raising.

“My mission is to change how we all live our lives … to get people to ask themselves every single morning what makes their heart happy and then to go and do at least one of those things,” Burns said. “I think that if you’re living to make your heart happy every day, you’re going to make really good decisions. Life is short, live it with a happy heart.”