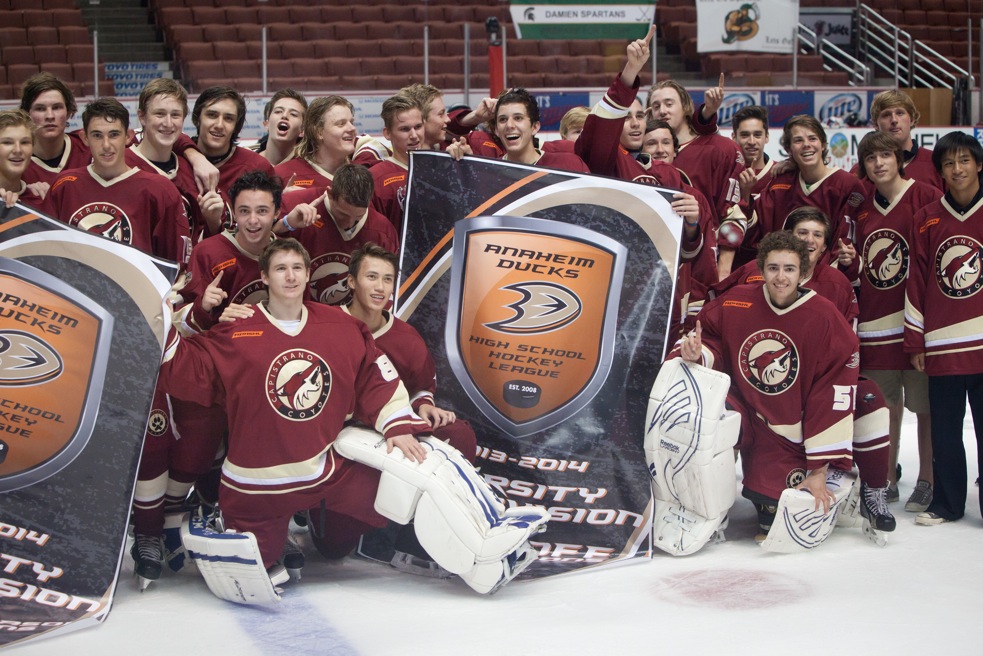 It was the picture-perfect ending to a script that began last September by Darren Gardner, head coach of the Capistrano Coyotes ice hockey team.

Gardner had brought together 27 high school hockey players from across the Capistrano Unified School District to play in their inaugural season of the Anaheim Ducks High School Hockey League. He laid out his plan and told them if they bought into the team and trusted each other, they could be hoisting a championship trophy at season’s end.

Led by a collection of stars and a strong supporting cast, Gardner and the Coyotes finished the script on Friday, March 7, with a convincing 9-3 win over Damien in the league’s Varsity 2A Division Championship.

“If you were to write a script about the perfect hockey season, it would be very close to what we experienced,” Gardner said via email. “Ultimately, reaching the point where the players capture the team and take ownership as a group, regardless of games won or lost, the result is a positive environment that generates wonderful memories. To me, that is what youth sports is all about. Winning the championship just makes it that much more special.”

The Coyotes directed their way through the season with a potent offense, especially in the final game.

Paul Boutoussov, a senior from Dana Hills High School, scored the team’s final four goals to help seal the victory. Boutoussov put on an offensive display throughout the playoffs, scoring six goals and tallying five assists in three games, earning the SportsNetUSA Championship MVP Award. With the Coyotes leading Damien 4-1 heading into the second period, Boutoussov went on a scoring run, notching all of his goals in a 12-minute span.

In all, the Coyotes scored 27 goals in the playoffs. They defeated Villa Park and Corona Norco in the first and second rounds, respectively. The Coyotes outscored their opponents by a combined 27-8 margin.

Their offensive prowess and stingy defense remained consistent throughout the season, an aspect Gardner thought was possible from the get-go. For guiding the team to the title in their first year, Gardner was named the SportsNetUSA Coach of the Year.

The Coyotes will now wait to see how the league will restructure its two divisions over the offseason.

The team will lose six impact seniors but plan to bring back a number of players. With the rise in popularity of the league, and the Coyotes in particular, Gardner hopes to have enough players next season to form a junior varsity team, which would be another first for a team that has had a seaso