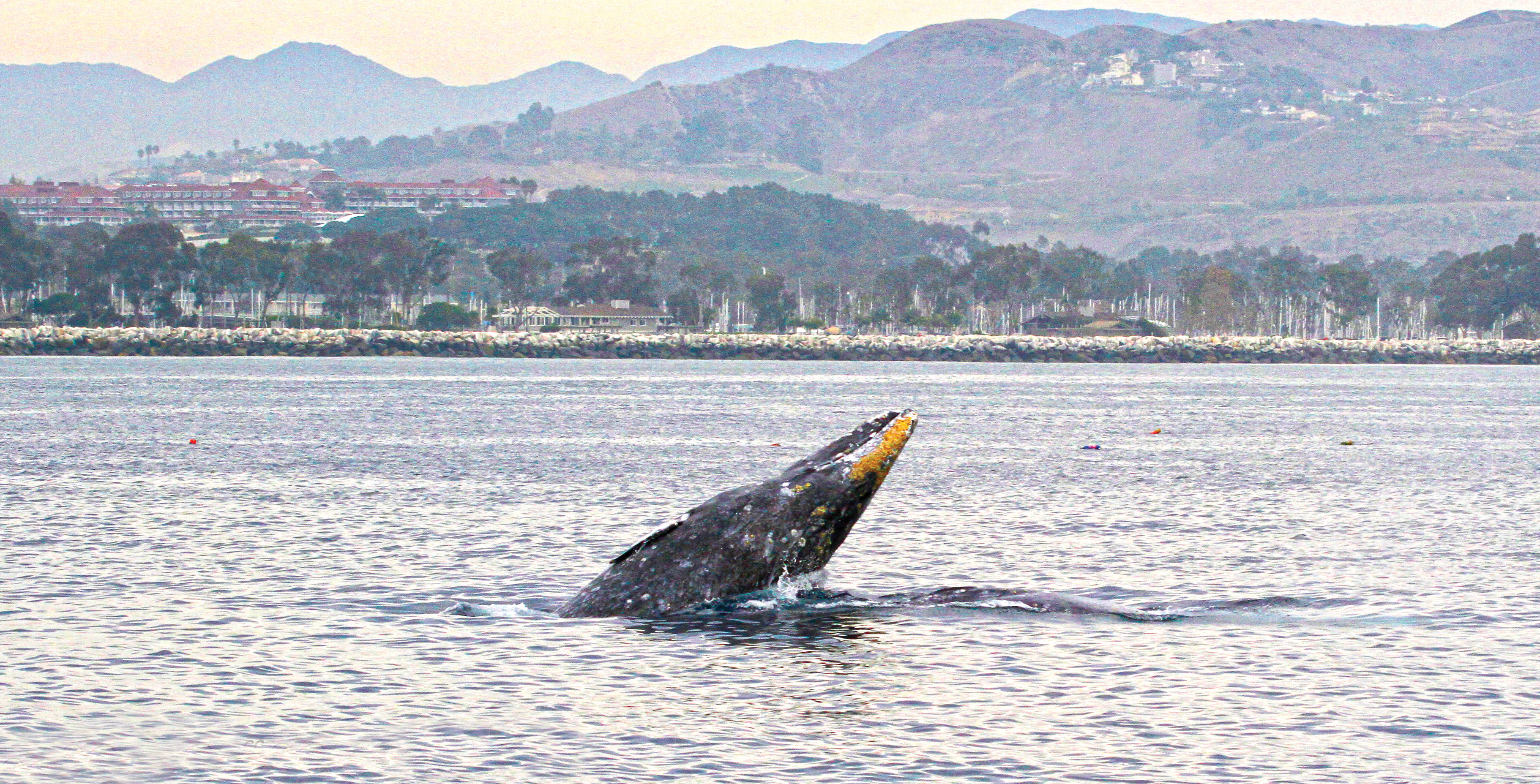 Since many of these items are used once before being discarded, partnered organizers of the 43rd annual festival are asking event participants and goers to avoid bringing and distributing objects that often have a hard time finding a recycling bin. It’s part of a decades’ long effort to promote a greener and cleaner yearly celebration of the California gray whale migration, through public education and outreach.

“It is a constant educational message to get people to understand what it takes to protect the planet and the receiving waters of the Pacific Ocean,” said festival organizer Penny Elia. “It is a precious commodity and it is up to all of us to preserve it for future generations.”

Each year, thousands flock to Dana Point to witness one of the world’s largest mammals’ 10,000-mile roundtrip passage to their breeding and birthing grounds in Baja California in the winter and back to the Bering and Chukchi seas, bordering Russia and Alaska, with their pups in the spring.

And over the last four decades, the festival honoring this natural-migratory custom has grown into a two-weekend event, filled with big crowds, interactive activities and educational series, providing an example of community partnerships at their finest.

Green initiatives throughout the Dana Point Harbor’s business and boating sectors, in Dana Point and surrounding communities have taken root at the festival where large-scale cleanups take place and local organizations are given a chance to share their work. This year a number of established practices will be joined by new initiatives to make this festival one of the cleanest around.

A Day of Awareness

It’s been 14 years since the Dana Point Harbor Association put an idea into action and launched its first Ocean Awareness Day. The event fluctuates in size each year but has grown into an interactive learning experience where local municipalities, utilities, businesses and groups share efforts with the public.

“Groups can come and do public outreach and show what they are doing, both directly and indirectly, to preserve the ocean for our friends like the gray whales,” said DPHA Executive Director Kim Tilly.

Work being done to clean up Orange County’s southernmost port by encouraging green boating and business practices have filtered into the county’s partnership with the Festival of Whales. Starting five years ago, the county and festival organizers strived for a Styrofoam-free event, as proactive Harbor businesses have already taken the plunge, said OC Dana Point Harbor Director Brad Gross.

“Since then we have worked to reduce the use of single-use water bottles, Mylar balloons and other items that incorporate small pieces of plastic that easily miss the recycling receptacles,” Gross said.

While the Harbor, the festival’s main location, has received some warnings at Baby Beach from the Orange County Health Care Agency, the nonprofit Heal the Bay’s annual report card has consistently given the port ‘A’ and ‘B’ grades over the past few years, Gross said.

The positive marks are a testament to the Harbor’s underwater cleanups, recycling initiatives, cigarette-butt roundups and community, business and boater outreach measures taken throughout the year, he said.

Filling Up, Not Tossing Out

For the first year, Festival of Whales organizers are encouraging guests to bring their own or purchase a new reusable-water bottle to Harbor events.

With nearly 20 water fountains situated throughout the Harbor, organizers believe filling up on fresh water will be a non-issue for festival goers. Also, The Ecology Center, a San Juan Capistrano-based eco-educational destination, will have a water truck stationed at key Harbor locations throughout the festival’s two weekends for people to top off their bottles.

“It is all about community, and bringing the greater community together to grow the greater green message,” Elia said.

Repurposing those single-use plastic water bottles for a greater use has become a central part of one San Juan Capistrano nonprofit’s message to underprivileged children living in the southern Orange County cities of Dana Point, San Clemente and San Juan.

Great Opportunities works in high-density, low-income neighborhoods to help youth recognize their potential and understand that by believing in themselves they can achieve anything, said organization co-founder Eric Groos.

Known as Great Opps to participants, the volunteer group centers its work around aquatic-based youth programs to teach life skills like swimming to help kids get out of their neighborhoods. Since its inception, Great Opportunities volunteers have taught about 300 kids a year how to swim, before taking them to the beach to fish, kayak, surf and stand-up paddleboard.

On March 8 the lessons continue as young group members embark on the 5th annual Mickey Munoz Mongoose Cup atop donated SUP boards and some specially made water crafts, dubbed El Plastiki. A new El Plastiki model will be unveiled, bearing the name IV, as kids hit the race course on SUP boards made entirely from recycled materials like plastic-water bottles, recycled wood and campaign signs.

Groos said it is all part of the organization’s larger message to inspire youth to take action.

“At my stage in life, I have habits already ingrained where I have to make a conscious effort to make a change, but when you teach a kid at 5, 6, 7 and 8 years old, it becomes so innate that they don’t think about their choices, they just do it,” Groos said.

Great Opportunities also participates in beach and neighborhood cleanups to get at-risk youth involved in positive changes where they can take ownership of their surroundings, Groos said. A cleanup opportunity is available for all Sunday, March 8 from 9 a.m. to noon at Doheny State Beach, where Park Interpreter Vicki Wiker will present ways community members can maintain coastal resources.

In addition to water activities and neighborhood cleanups, volunteers take kids on bike rides and teach them how to navigate the public transportation system to get them out of gang-injunction neighborhoods and into surrounding communities, Groos said.

The Orange County Transportation Authority and Metrolink have once again partnered with the festival to offer environmentally-friendly modes of transportation to and from the festival’s events.

This year, OCTA and Metrolink tickets, as well as toll road transponders make attendees eligible for special deals, such as whale watching discounts at Dana Wharf Sportfishing & Whale Watching and the Ocean Institute, room discounts at the Dana Point Marina Inn and coffee and appetizer promotions at The Coffee Importers and Wind & Sea Restaurant.

Also, during both weekends of the festival, free shuttle services will be offered at the Harbor and a new water taxi service will take attendees from the Ocean Institute to Dana Wharf for a small fee.