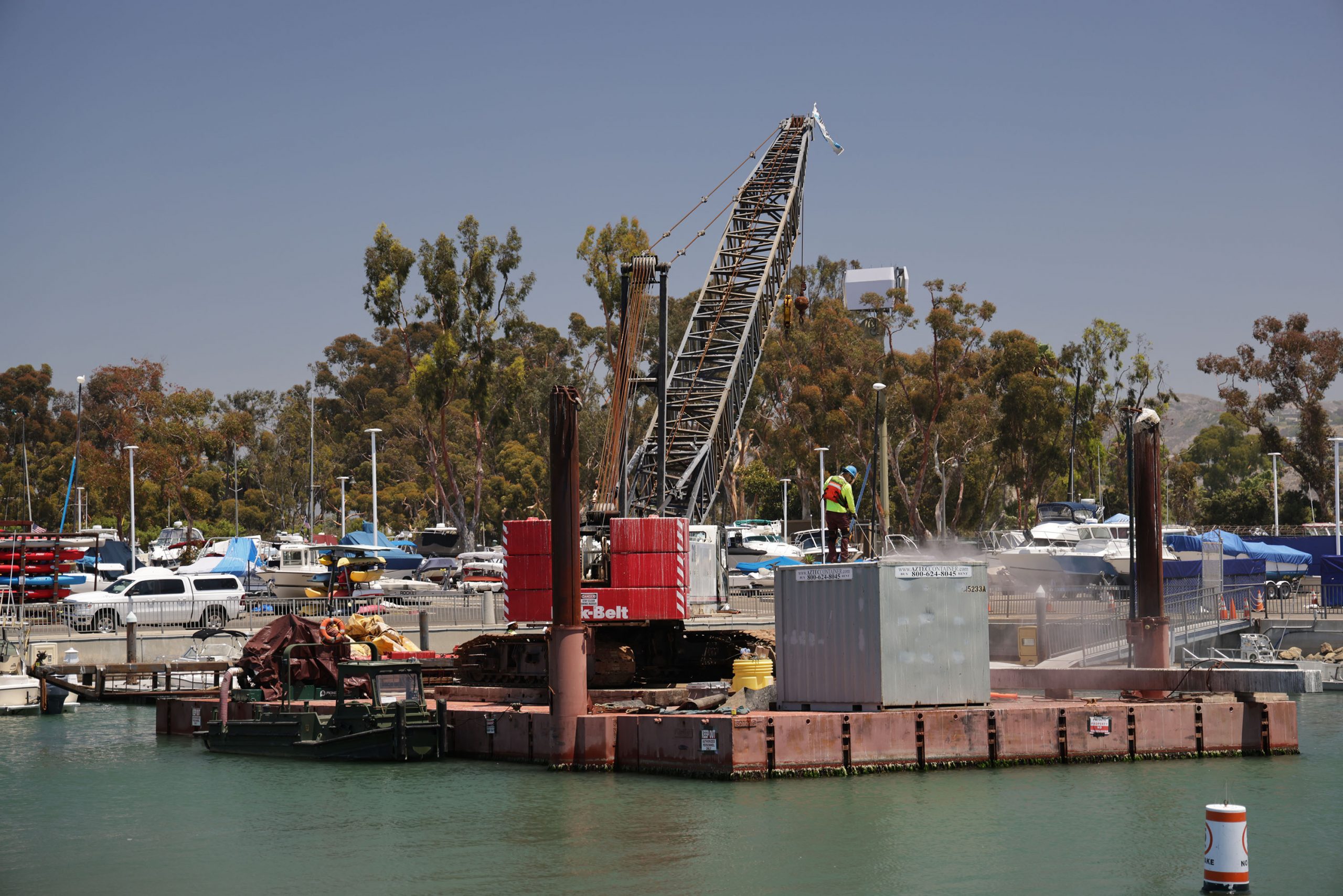 Aug. 5 marked the groundbreaking on construction in the Dana Point Marina and official commencement of the long-awaited harbor revitalization project.

The redevelopment of the marina is the first of three components in the harbor revitalization efforts, with the commercial core and hotel projects to follow.

The start of the marina redevelopments comes four years after the Dana Point Harbor Partners entered a 66-year lease agreement with the County of Orange to manage the harbor and invest $300 million towards the revitalization.

“After many years of working on this and following the footsteps of many others for decades, it feels wonderful that we have started in-water construction at Dana Point,” said Joe Ueberroth, founder and managing partner of Bellwether Financial Group—one leg of the Dana Point Harbor Partners.

The harbor has served the community for well over 50 years, Supervisor Lisa Bartlett said in a recent media release.

“As we embark on the harbor revitalization, I am excited for all the improvements that are coming that will enhance the experience for all the citizens of greater Orange County, as well as for visitors to our harbor from near and far,” Bartlett said.

The work in the Marina is scheduled to occur over roughly 15 phases, with construction anticipated through November 2028. Boaters docked in the Marina will be able to stay in the harbor throughout the duration of construction, and will soon have the opportunity to pick new slips.

The first stage of construction entails demolition of the existing dock and piles, followed by pile driving.

“Although the noise levels will be monitored, you may find the consistency of the noise to be disruptive at first,” Dana Point Marina General Manager Kelly Rinderknecht said in a newsletter. “The good news is that pile driving occurs only a few days during each phase.”

Though construction is permitted on Saturdays, dock construction will take place primarily on Monday through Friday from 7 a.m.-5 p.m.

Bellwether Financial Group, a regional developer, global marina builder and operator, received approval from the California Coastal Commission (CCC) to begin construction on the redevelopment of the marinas in March 2021.

The docks are being built in Dixon, California by Bellingham Marine where they will be trucked down to Dana Point at night ahead of installation. This method allows for a smaller footprint of construction, Ueberroth explained.

The first two phases of docks are already built and ready for installation, Ueberroth said. The C Dock replacement will be the first of 15 phases in the marina revitalization, with an additional two phases in the outer basin.

“We have removed C Dock from the west cove and we’re replacing it with three docks in that same area,” Ueberroth said.

According to the Marina at Dana Point newsletter, all vessels previously docked at C Dock have been relocated within the harbor.

The next phase of construction will consist of replacing B Dock. Tenants with slips in B Dock will receive relocation notifications by mid-August and will need to be cleared from the dock by Oct. 15, according to the newsletter.

The Dana Point Marina Slip License Agreement requires that vessels be in seaworthy condition. Vessel seaworthy inspections will be performed during vessel relocations.

Prior to relocation, boaters will be notified between six weeks to two months in advance that they will need to move to a new, temporary slip.

“We communicate to the boaters and when it’s their phrase where they’re currently existing, we will move them into other places in the harbor,” Ueberroth said. “No boaters are being displaced.”

In choosing new slips, the decision will be based on seniority, where the boaters who have been in the harbor the longest will have first pick of the new slips.

As Bellingham installs 25-foot slips at C Docks, the Marina is in the process of notifying tenants currently renting that slip size, Ueberroth explained.

“The next phase will be adjacent to the area we’re doing construction,” Ueberroth said. “It is our intent to have phase three be the one adjacent to that, but we will flip over to the east cove in front of the commercial core to coordinate our efforts alongside what they’re doing on the land side.”

“Then, the phases should be in that east cove and there’s three phases there,” Ueberroth continued. “Then we return to finish out the west basin and then we start on the island.”

The average length of the harbor’s slip will increase from 30 feet to 32 feet, Ueberroth said. The number of slips will decrease from 2,409 to 2,265.

“The new design addresses both ADA accessibility and public access, the guest services will set a new standard for the West Coast, and the electrical and pump-out systems will meet the needs of boaters for generations to come,” Ueberroth said in a recent media release.

The new docks are a better design, Ueberroth explained, as they’re stronger and require less pile.

“I think people are really going to like the gate systems, the gangways, the different aspects of the docks,” Ueberroth said.

The docks currently in the marina are at the end of their useful life, Ueberroth said.

“We’ve done a lot of temporary fixes to make them (the docks) structural, so people can still be in the harbor, but they’ve been working on trying to replace this for 20 years,” Ueberroth said.

The start of construction on the marina comes amid a class-action lawsuit that boaters filed last fall against the Dana Point Harbor Partners stemming from the fee increases imposed on slip renters. The complaint alleges that the increases are a violation of the lease agreement DPHP has with the County of Orange, the Dana Point Tidelands Grant, and state law.

Though Judge Glenda Sanders denied an emergency request by boaters to put a halt on slip fee increases in October 2021, Sanders ruled in March 2022 that the boaters lawsuit can proceed.

Dennis Winters, who represents the boaters in the lawsuit, explained this past March, that the judge’s ruling allows the boaters to begin the discovery process and bring up motions.

Dana Point Boaters Association President Anne Eubanks said that when the rate increase took place in October of last year, many boaters left the marina, either selling their boats or docking in a different marina.

Responding to allegations that the marina would empty of boaters as a result of slip rate increases, Ueberroth said that hasn’t been the case.

“Our waiting lists are growing, the demand is getting more and more as we bring in a new Marina, we think the demand will grow even more at that time,” according to Ueberroth.

Some boaters who spoke with the Dana Point Times this month on the condition of anonymity for fear of reprisal said there has not been adequate communication between the Dana Point Harbor Partners and boat owners throughout the revitalization process.

“There hasn’t been good communication the whole time,” Eubanks said. “The Dana Point Boaters Association used to have a fairly good working relationship with all the stakeholders in the harbor, including the Dana Point Harbor Partners until the master lease was signed.”

“Once the master lease was signed, I think they felt like we were more of a nuisance than a collaborative stakeholder at the table,” Eubanks continued.

Ueberroth, however, encouraged boaters to reach out to the Marina at Dana Point with any concerns.

“If boaters have concerns, they need to express their concerns,” Ueberroth said. “But I haven’t seen anything that’s happened in the harbor from an operational standpoint that would merit them having concerns.”

“Boaters, rightly so, are interested in what is occurring in the harbor,” Ueberroth continued. “We communicate to our tenants, all of them, on a weekly basis.”

Working alongside different governmental agencies, “it’s taken a long time for us to get final plans,” Ueberroth said.

“When you are doing a development, you’re going through a lot of different agencies and there’s always small tweaks, there’s delays and there’s modifications that you have to make and so it’s hard to answer everybody’s questions specifically,” Ueberroth continued. “It’s a process and there’s a lot of stakeholders.”

Despite the long process to get to the point of beginning construction, Ueberroth thinks boaters will be pleased that the final marina layouts are “extremely similar to what we’ve provided before. The boaters that I’ve talked to are pretty excited.”

In a recent media release, Ueberroth explained that it’s “difficult for most people to imagine the heavy lifting that takes place during the years prior to commencing construction.”

He added that the revitalization project is entering the “fun period where the installation teams go to work and the community can witness the transformation of the marina in its 15 phases while we continue to operate as the largest marina on the West Coast.”

The marina construction is anticipated to last five years.