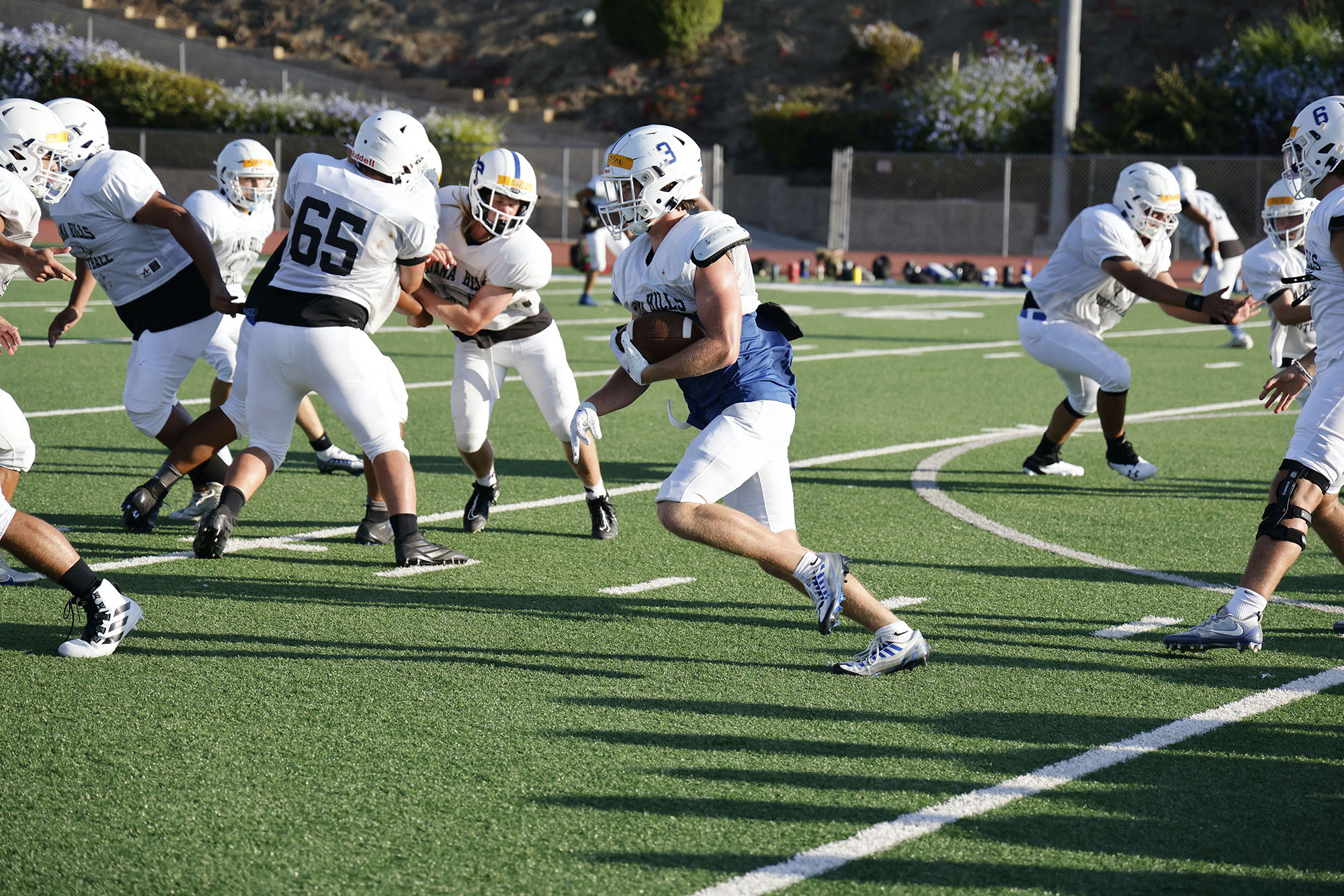 Click here to view the print version of this special section

Berry will help replace some of the top speed lost on the outside of the Dana Hills offense. Berry ran a time of 11.24 seconds in the 100-meter sprint in the spring at San Juan Hills. When eligible, Berry will take the top off opposing defenses.

Garcia is a key returner on a Dolphins offensive line who has improved its size and strength. Garcia comes in at 6-foot-5 and 275 pounds to lock down the front side of the Dana Hills offense. Garcia will be a big piece for the future of the Dolphins offense.

Guarascio has embraced his role as a senior leader of the Dana Hills offense. Guarascio carried the ball 100 times for 612 yards and four touchdowns last season. He also caught 14 passes for 160 yards. He will also help the defense with reps as a linebacker.

Kucera is another transfer from San Juan Hills who will be a big weapon for Dana Hills on the outside when he becomes eligible. Kucera is a good, all-around athlete who’s gotten after it in the weight room. Coach Tony Henney said Kucera has adapted well to the Dolphins system.

Owen is the lead returner on the Dana Hills offensive line as the big senior up front. Owen is listed at 6-foot-2, 230 pounds and will move the interior of the running attack. Owen said that this year’s Dolphins are mean and nasty on the offensive line.

Bolter moves back from the linebacker spot to the safety position. Like many impact players for the Dolphins, Bolter will play two ways, with time as a wide receiver on offense. Bolter said he plays fast and physical and will try to hit anyone. Bolter made 31 tackles last season.

Brougham moves back from the defensive line to the linebacking corps after a big season for the Dana Hills defense last season. Brougham is the leading returning tackler for the Dolphins, with 62 total tackles last season, including 38 solo tackles, 24 assisted tackles and nine tackles for loss.

DePierro brings more size up front on the defensive line. DePierro is listed at 6-foot-4, 205 pounds. The Dana Hills defense will lean forward with its strong defensive front. DePierro will also go both ways for the Dolphins, with reps as a tight end on offense.

Hill is another who moves from the defensive line back to the linebacker spot. Hill is 6-foot, 205 pounds and made nine tackles last season as a sophomore. Hill said he is still learning and trying to be fast and explosive. Hill will also play a bit as a running back.

Torbert was an all-league selection as an offensive lineman last season, but he’ll also make a huge impact on the defensive line. Torbert is 6-foot-1, 225 pounds, and he was one of the better tacklers up front last season. Torbert made 27 tackles, including four tackles for loss.