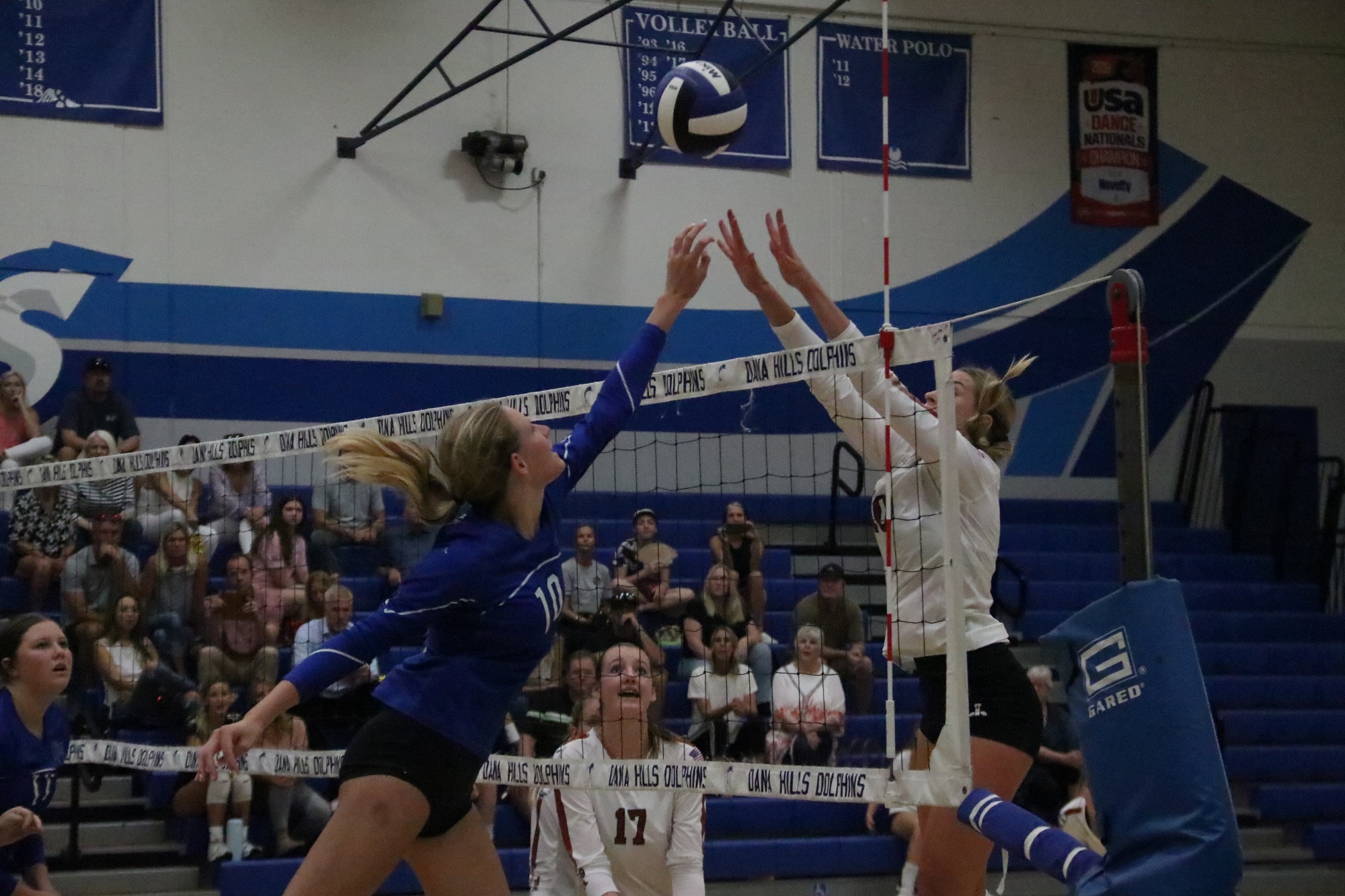 The fall sports season at Dana Hills High School features some of the biggest rivalries the school has to offer, as well as some stars looking to shine on the biggest stage.

The Dana Hills boys water polo team’s matches with San Clemente are as nasty as neighborhood rivalries get, and the two schools’ volleyball programs are also often intertwined. The Dolphins cross country program is one of the most recognized on the CIF-SS circuit, and Dana Hills runners always set a standard for success.

Let’s see how these teams and all the fall sports teams shape up for 2022:

The Dana Hills girls volleyball team has been the very definition of up-and-down to open the 2022 season, with the Dolphins finding themselves on the unfortunate end more often than not.

At 3-6 on the season, Dana Hills has shown spurts of dominance but also some frustrating inconsistencies. Early in the campaign, coach Tom Hoff said that his team needed to be scrappy. The Dolphins have shown that attribute, but they’ve also shown a lack of it at times.

Dana Hills now sits on the edge of its South Coast League schedule, where the Dolphins will need all the scrappiness they can muster.

The Dolphins snapped a nine-game losing streak to rival San Clemente with a double-overtime thriller to help secure their first league title since 2015.

Dana Hills was given the No. 2 seed out of the South Coast League and a road game at Santa Barbara in the Division 1 playoffs. That was not much of a reward, but the Dolphins look to further their success with a drop down to Division 2 this season.

Either way, the first goal for Dana Hills is again the South Coast League and, again, knocking off San Clemente in the process. It’s a goal the Dolphins’ eight seniors certainly have their focus on, as once wasn’t nearly enough.

Dana Hills opens league play at El Toro on Sept. 27. The Dolphins host San Clemente on Oct. 4 and play the Tritons on the road on Oct. 20. The league also welcomes Sea View League champion San Juan Hills, which also moves up to Division 1. Dana Hills plays at San Juan Hills on Oct. 6 and hosts the Stallions on Oct. 24.

The superstar for the Dana Hills distance running program now solely resides on the Dolphin girls side, at least for now.

Four-year varsity runner Allura Markow enters her senior season after winning the league championship, finishing third at the Orange County Championships, fifth at the CIF-SS Finals and 14th at the State Championships as a junior. Markow also had a stellar track season, which featured a county title and CIF-SS runner-up medal in the 3,200-meter run.

As a team, the Dolphins are certainly more than just Markow, boasting a No. 1 ranking in CIF-SS Division 3. Dana Hills dropped from Division 2 to Division 3 this season, as the cross country divisions are based on school enrollment size.

The Dolphins host the 2022 Dana Hills Invitational on Sept. 24.

The Dana Hills boys cross country team has an impossible hole to fill with the graduation Jai Dawson, the league, county, CIF-SS and state champion a year ago.

However, this is the Dana Hills cross country program, and despite the exit of superstars, the Dolphins always find their way to reload. There are plenty of runners still in the fold to make the Dolphins a threat in Division 3.

Dana Hills is ranked No. 3 in the latest Division 3 rankings.

Dana Hills opens the season in earnest in Hawaii at the Iolani Invitational on Saturday, Sept. 10, and returns for the Woodbridge Classic at the Great Park in Irvine on Friday, Sept. 16.

The Dana Hills girls golf team had three players advance to the CIF-SS postseason last season, and all three return to lead the Dolphins in 2022.

Zoie Fuentes, Sydnie Duvall and Sophia Wahlstrom all finished in the top half of the field at the 2021 CIF-SS Individual Southern Regional, as all three tied for 61st in the 135-player field.

Early results have been positive for Dana Hills this season.

The Dolphins were 3-12 overall last season, including a 1-7 record in the South Coast League.

As a result, for the first time, the Dana Hills girls tennis team—a program that had won its 28th consecutive South Coast League title and advanced to a CIF-SS Final just four years ago—will compete in the Sea View League, the lower division of the Coast View Conference.

The Sea View League is a four-team league instead of the five-team South Coast League, which means the teams play three matches against each other instead of just two.