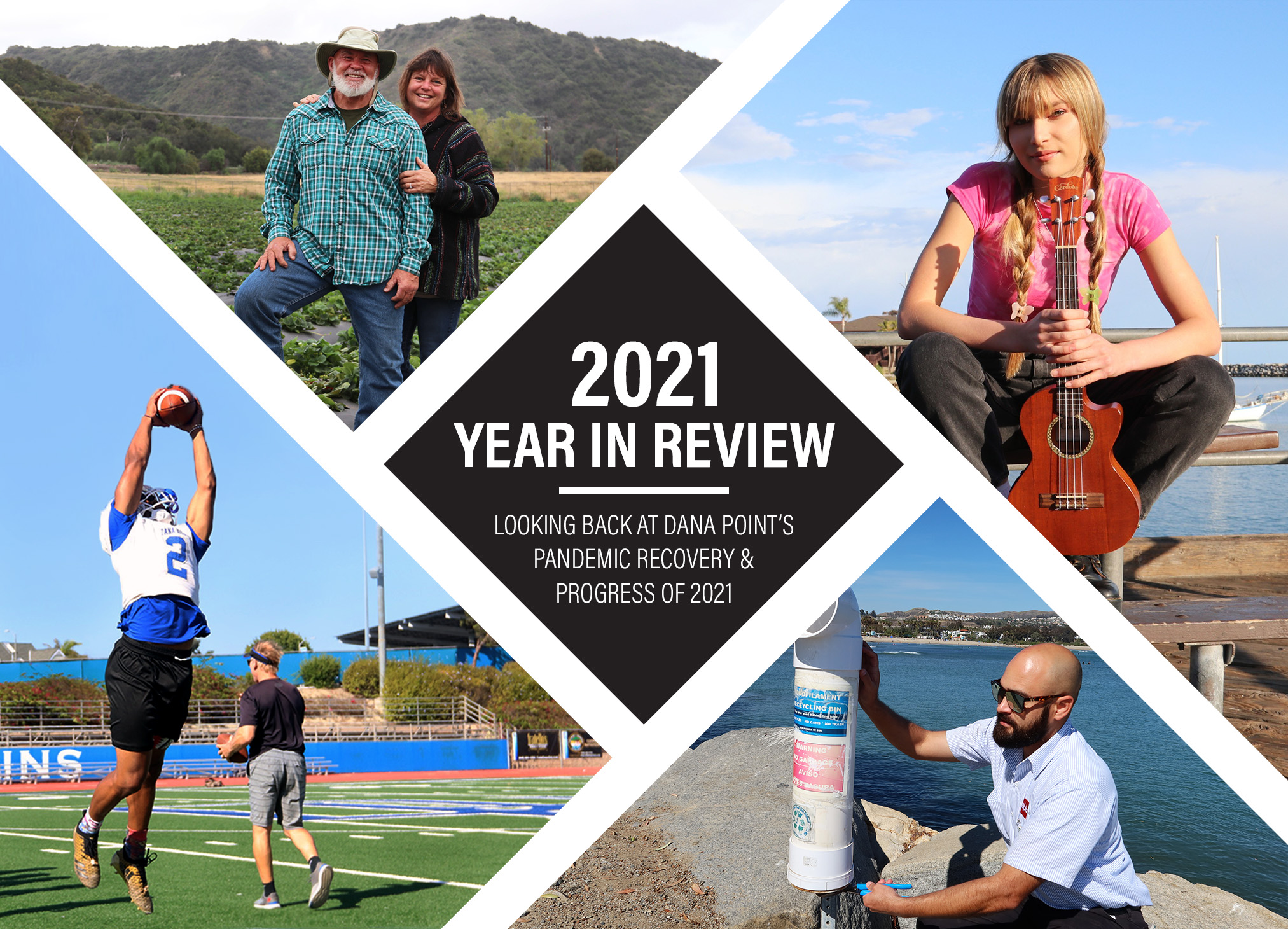 2021 Year in Review: Looking back at Dana Point’s pandemic recovery and progress of 2021

Written and compiled by Breeana Greenberg

Every year, Dana Point Times looks back at its coverage throughout the year and compiles a list of the top stories that happened around town.

As the world continued to grapple with COVID-19, the City of Dana Point set its sights on economic recovery. The vaccine rollout gave a glimmer of hope that the world would return to some form of normalcy, stay-at-home orders were lifted, and students returned to their classrooms, in person.

The city began efforts to update the General Plan and Doheny Village Revitalization. The Street of Amber Lantern reopened after four years of its closure and surrounding construction, and the Dana Point Harbor Partners was approved to begin redevelopments of the marinas.

COVID-19 remained a constant through 2021, with the emergence of the Omicron variant as the year came to a close.

Economic recovery had been named a top issue for the year of 2021, after the health and economic threat of COVID-19 declared itself to be the issue of focus for 2020. The city felt the impact of the hospitality and tourism industry taking a global hit, as the transient occupancy tax, the city’s largest source of revenue, was projected to have a shortfall of $5.9 million for the 2021 fiscal year.

In early January, Newsom announced that the state would aggressively work to accelerate the pace of vaccine administration. Vaccines became available for those 65 and older, as well as younger individuals with other health issues. The county opened a new Super Point of Dispensing (POD) site for COVID-19 vaccinations in late January at Soka University in Aliso Viejo.

State jobs reports showed an increase in unemployment—the first since the early days of the pandemic.

In mid-February, Dana Point City Council heard a presentation on the Doheny Village Plan. City staff began budgeting for connectivity improvements in Doheny Village, and the city’s Arts and Culture Commission was signaled to assist in beautification efforts.

Newsom gave a virtual address in early March, highlighting the initiatives and plans of action surrounding COVID-19 testing, vaccinations for the virus and the challenges the pandemic posed on equity and the economy. Volunteers continued to gather signatures to try to remove Newsom from office via a recall election.

Though the state and county’s jobless numbers remained stagnant after the New Year, Dana Point’s unemployment rate grew from 6.6% to 6.8%

The 50th annual Festival of Whales was held with a mix of in-person and virtual events.

On March 9, officials representing Raintree Partners and the City of Dana Point celebrated the reopening of the Street of Amber Lantern after four years of its closure and surrounding construction.

The California Coastal Commission also issued approval to Dana Point Harbor Partners to begin construction on the $330 million redevelopments of the marinas.

As Orange County dropped to the less restrictive orange risk tier in late March, Newsom announced in early April that conditions in California could return to some sort of normalcy, and with fewer restrictions, by June 15, as long as COVID-19 cases kept dropping, hospitalization numbers remained low, and vaccinations increased.

The Capistrano Unified School District also announced that middle and high school students could return to campus four days a week for the remainder of the school year starting in late April. The district looked to bring students back to campuses full-time in the next school year, which began on Aug. 17.

The City of Dana Point worked to identify sites for affordable housing, and develop and update the city’s “Housing Element” for its city plan to meet the Regional Housing Needs Assessment.

Dana Hills High School freshman Ava August progressed into the top 24 round of ABC-TV’s American Idol after she performed one of her own original songs. August ultimately made it to the final-12 round before being voted off the show.

The City of Dana Point kicked off a community outreach program to engage residents, businesses and other stakeholders in review and approval of its draft plan for an updated Doheny Village Plan. The city also looked to strengthen the city’s code enforcement capabilities relating to short-term rentals.

Juliette Paez Paskovitz, the matriarch of one of surfing’s most storied families, died peacefully in San Clemente in early May.

Though the looming impacts of the pandemic canceled many Memorial Day events throughout Orange County, the City of Dana Point and the Veterans of Foreign Wars Post 9934 hosted their traditional services in Pines Park with modifications.

Fifteen months after a statewide stay-at-home order was issued in mid-March of 2020, the state lifted its restrictions in mid-June, allowing businesses to operate at full capacity without social-distancing requirements.

Six men, including conservative activist Alan Hostetter of San Clemente, were indicted on a conspiracy charge in connection to the breach of the U.S. Capitol on Jan. 6.

A nonprofit’s petition, challenging the 2019 coastal development permit authorizing the dismantlement of the San Onofre Nuclear Generating Station, was tentatively denied by a Los Angeles County judge in mid-June.

The petition alleged that the California Coastal Commission had violated its own objectives and standards under the Coastal Act when it approved the Permit for Southern California Edison to deconstruct the power plant.

As COVID-19 restrictions continued to ease and case numbers declined across the state, Orange County cities looked to transition back to traditional Fourth of July festivities.

Many officials made the decision to cancel their fireworks display in 2020 or prohibit public attendance at events; however, the June 15 reopening of California permitted cities to plan and budget for fireworks and other community celebrations in 2021.

The City of Dana Point Arts and Culture Commission and a local property owner launched an artist competition to design and paint a 16-foot by 80-foot mural on a building on the corner of Doheny Park Road and Las Vegas Avenue, which currently houses a U.S. Post Office.

The source of an oil spill off San Clemente Island, first reported by the captain of a whale-watching boat in late June, had yet to be determined, prompting local environmental groups to push for further investigative efforts from authorities.

City Council heard a presentation on a proposed train track enhancement project for Capistrano Beach in mid-July, in which Metrolink, in coordination with the Orange County Transportation Authority, proposed a 1.2-mile extension of railroad track.

With the arrival of the Tokyo Olympic Games came the premiere of surfing as an Olympic sport. South County locals Kolohe Andino and Caroline Marks represented the United States, and San Clemente’s Matt Biolos supplied boards.

Stanley Cunnings, the founder of Ocean Institute and a lifelong science educator, died in mid-July.

Reps. Mike Levin and Rodney Davis announced the formation of their Spent Nuclear Fuel Solutions Caucus, a bipartisan group of House members tasked with driving progress on the safe storage, transportation, and disposal of spent nuclear fuel across the country.

Similar to the rest of the country and the world, South Orange County saw a surge of COVID-19 cases due to the Delta variant.

Students returned to campus for the 2021-22 school year. The first day of school for Capistrano Unified School District marked a return to normalcy, though mask requirements were a reminder that the pandemic continued.

Following the United States’ withdrawal from Afghanistan, Dana Point Mayor Jamey Federico, who served in the military for more than 20 years, led the effort to bring an Afghan interpreter’s wife and mother to safety.

While every governor in California since 1960 has faced a recall attempt, the state saw only its second recall election in history this year. In mid-September, a majority of California residents voted to keep Newsom in the governor’s office.

Ten U.S. troops deployed from Camp Pendleton were among the 13 servicemembers who died in a suicide bombing at the Kabul airport in Afghanistan.

In early October, an estimated 126,000 gallons of heavy crude oil leaked into the waters off Orange County, prompting several beaches to close while crews cleaned up contaminated areas where fish and coastal wildlife were threatened.

The Elephant Parade, a herd of painted elephant sculptures, returned to Dana Point in an effort to bring attention to saving the Asian elephant from extinction.

Following the news that there would be slip-rate increases in the Dana Point Harbor, the Dana Point Boaters Association and the group Save Our Slips worked to halt the slip-fee increase.

A class-action lawsuit was filed against the Dana Point Harbor Partners and the County of Orange on behalf of boaters. In mid-October, a judge denied the request to put a halt on slip-fee increases that went into effect on Oct. 1.

Two historic lanterns were restored and installed in mid-November at Lantern Village Community Park. The last Dana Point lantern post had been removed from its original location from Violet Lantern at La Plaza Avenue in February.

After a public workshop on short-term rentals showed mixed views on the subject, the future of STRs in Dana Point remains uncertain, as the Planning Commission and STR Subcommittee continue to develop regulatory policy.

Following Newsom’s vaccine mandate requiring all California students to be fully vaccinated against the COVID-19 virus to attend classes in person, parents and families placed shoes out in front of the Capistrano Unified School District offices, symbolizing their opposition to the mandate.

The OC Board of Supervisors’ debate over selecting a new map to redraw district lines concluded in late November, as they selected a map that largely keeps South Orange County under one district.

In late November, the California Coastal Commission approved an extension of the coastal development permit that’s allowed OC Parks to protect the Capistrano Beach shoreline with temporary boulders and sandbags.

OC Parks had presented an update to the California Coastal Commission in mid-August, exploring several different options for preserving the portion of coastline south of Doheny State Beach, including installing cobblestone buffers to try to save what remains of the beach.

The 44th annual Turkey Trot made a strong return to Dana Point with more than 8,000 runners participating in the Thanksgiving day races.

Holiday traditions returned to Dana Point with the La Plaza tree lighting and other festivities around the town.

Dana Point City Council recognized outgoing Mayor Jamey Federico and appointed Joe Muller to be the next mayor of Dana Point. Mike Frost will serve as mayor pro tem for 2022.

California saw its first detected case of the Omicron variant.