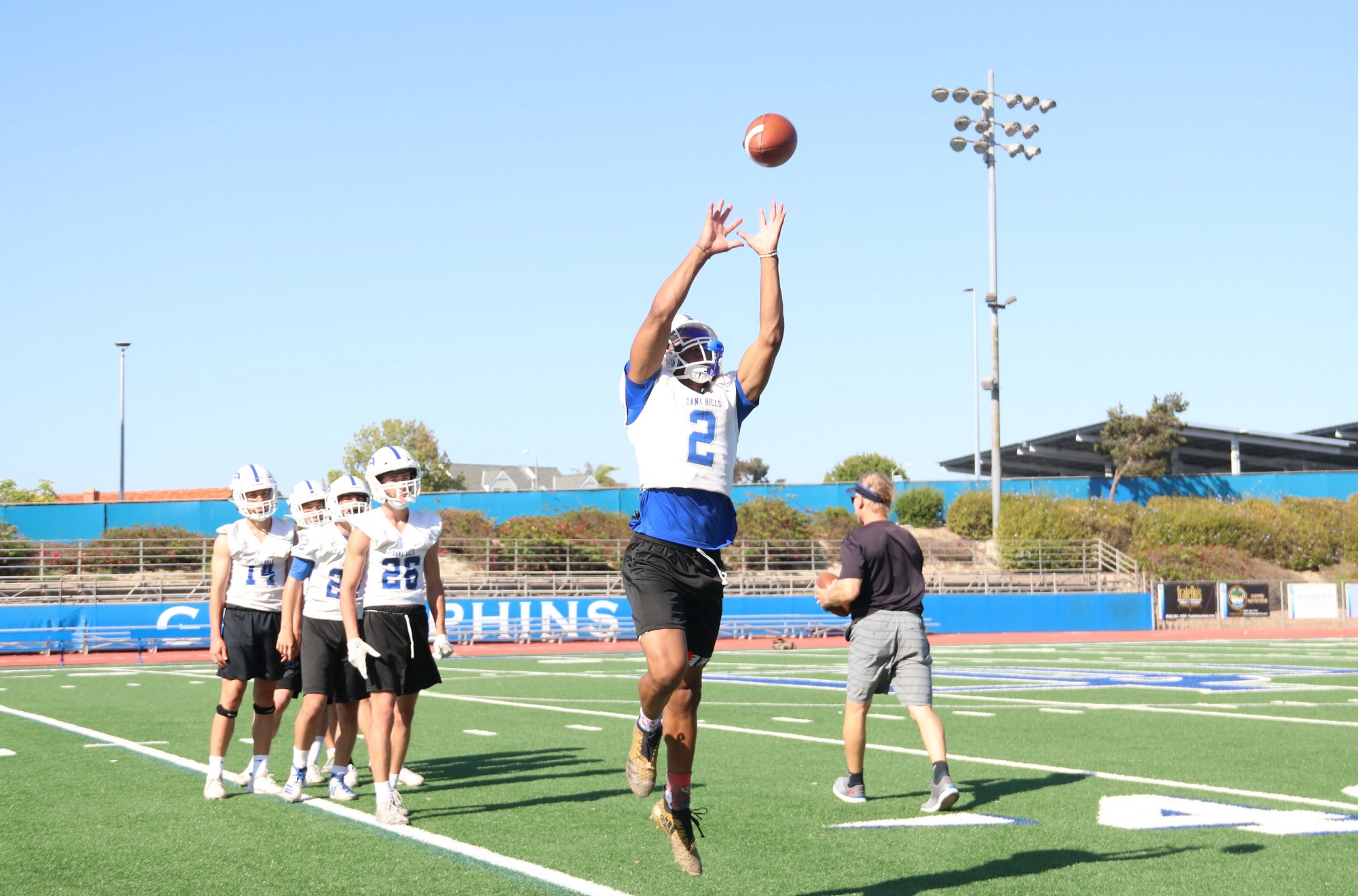 Click here to view the print version of this issue

Last season was a milestone for the Dana Hills High School football team. It was a milestone that could prove foundational to the future of the Dolphins program as it enters a new era.

Dana Hills has a new head coach in Tony Henney, a three-time CIF-SS champion with visions of getting the Dolphins back on the level with some of their South Orange County contemporaries.

“I think there was a lot of potential,” Henney said of what he saw in the program. “You could tell the kids that play, they care about football. That’s kudos to the last staff for instilling that into them. You see potential, and you get excited about it. I think we’re in the right league for us right now, and that’s a good thing. It gives us a chance to build something special.”

Henney takes over after Phil Skinner stepped down after six seasons in the position and two of the most successful in recent Dana Hills history.

It started with a small step in 2018, when the Dolphins pushed above .500 for the first time at any point in a season since the last time Dana Hills made the playoffs in 2013. Then came the record-breaking season of 2019, when Dana Hills swept its nonleague slate for the program’s first-ever 6-0 start.

Last season, in its inaugural run in the newly formed Pacific Coast Conference and Pacific Hills League, the Dolphins earned only their second league championship in program history with a three-way split of the title with Laguna Hills and Portola.

“It’s not hard to look at where it was for a good amount of time and where it’s been the last couple years that there’s an opportunity,” Henney said. “It’s one thing to try and rebuild if you’re in a league with Mission Viejo, San Clemente, San Juan Hills and whoever else. It’s another thing to be with schools that are athletically similar to you and have kids where you have a chance to be successful. Hopefully, we become successful, and when we get moved back, we can meet that challenge.”

And while a return to the Coast View Conference is part of the long view, there are things to be accomplished in the here and now.

With this new league and a change to the CIF-SS playoff system, Dana Hills can aim for its first outright league championship in program history and its first playoff berth in eight years.

“I think (the opportunity for playoffs) is huge,” senior quarterback Bo Kelly said. “We’ve talked about it since our freshman year, and I don’t think we were even satisfied with having a three-way tie for the league championship last year. I think solidifying a league championship and going far in the playoffs is a goal we’ve talked about for a while, and knowing we have the capability, too, it’s definitely a big thing to put together this year.”

Dana Hills’ biggest strength is its skill positions on offense.

It starts with Kelly, a dual-threat quarterback whom Henney was actually recruiting while he was at his last job as an assistant at Cal Poly.

“I think (the offense) has a chance to be explosive,” Henney said. “I think (Kelly is) a tremendous high school football player. He’s very cerebral, very smart, and has a very quick trigger, so he allows you to do a lot offensively.”

The Dolphins have the weapons for Kelly to distribute the ball. Senior receiver Omarjaye Black was an electric deep threat in the spring, and senior receiver Owen Chambers transfers in from JSerra. Senior James Allemann, a 6-foot-5 tight end, provides a big, physical target, and junior Christian Guarascio is a strong running back.

Another weapon for Dana Hills is the leg of senior kicker Kian Afrookhteh, who led the county with six field goals on eight attempts in the spring.

Dana Hills will operate in a 3-4 defense under Henney, meaning three down linemen and four linebackers. The Dolphins aren’t the biggest defensive group, so they will capitalize on speed and the coverage an extra linebacker can bring.

The experience for the Dolphins on defense comes in the secondary.

Senior Hayden Dendiu at cornerback is a vocal player and a good leader. Seniors Broghan Daley and Miles Darst have developed into college-recruitable safeties, something Henney says they didn’t believe they could be a year ago.

Senior linebacker Ethan Geske brings plenty of experience to that next level of the defense and a much-needed physical edge.

Dana Hills’ path to the finally make the playoffs for the first time since 2013 is both slightly easier than previous seasons and also more convoluted than ever before with the advent of yet another tweak to CIF-SS’ competitive equity playoff system.

When the competitive equity system was first put into place five seasons ago, teams were slotted into divisions based on data from the two previous seasons. That system was eventually tweaked at the top to make a Division 1 & 2 grouping, in which all teams would make the playoffs no matter what and played the season essentially for seeding purposes.

On the whole, the competitive equity helped eliminate the first-round blowouts seen in the old system and seemingly gave everyone an equal shot at a CIF-SS title. However, over time, some inequities began to show. The divisions didn’t all have the same number of teams, but the number of playoff teams was locked, meaning it was easier to make the playoffs in some divisions than others.

Additionally, teams could have two great seasons with a strong senior class that would put them in a higher division. Injuries and graduation losses would hit the following class, and despite having a weaker team, they would be stuck in the higher division. There were also instances of historically bad teams getting an influx of talent or transfers and running roughshod over a lower division.

To specifically address the last point and help with the inequity of the number of teams in some divisions, the latest tweak was passed by the CIF-SS and was originally slated to start last season.

The brackets will also be seeded straight No. 1-16, with no regard for league affiliations or league championships. In the past, league champions were guaranteed a first-round home game, and two teams from the same league couldn’t meet in the first round.

On the surface, this looks to be another step to complete equity by basing on the current season and not handing out any immediate disadvantages. Some detractors have pointed out it could be a single point in the rankings that is the difference between being a No. 16 seed in a higher division or being a No. 1 seed in the next division down.

However, the season still needs to play out to see if teams could or would try to control that destiny, or if this is truly an issue at all.

If the Dolphins can break through and make the playoffs, it won’t matter to the program where they land. It will just be the next step into making Dana Hills an attractive place to play football and where people can finally expect to win.

“I think that we (want to) build a program that is sustainable, that is reliant on the kids of Dana Hills to want to go to Dana Hills,” Henney said. “I want the kids that stare through the fence to want to be Dolphins.”