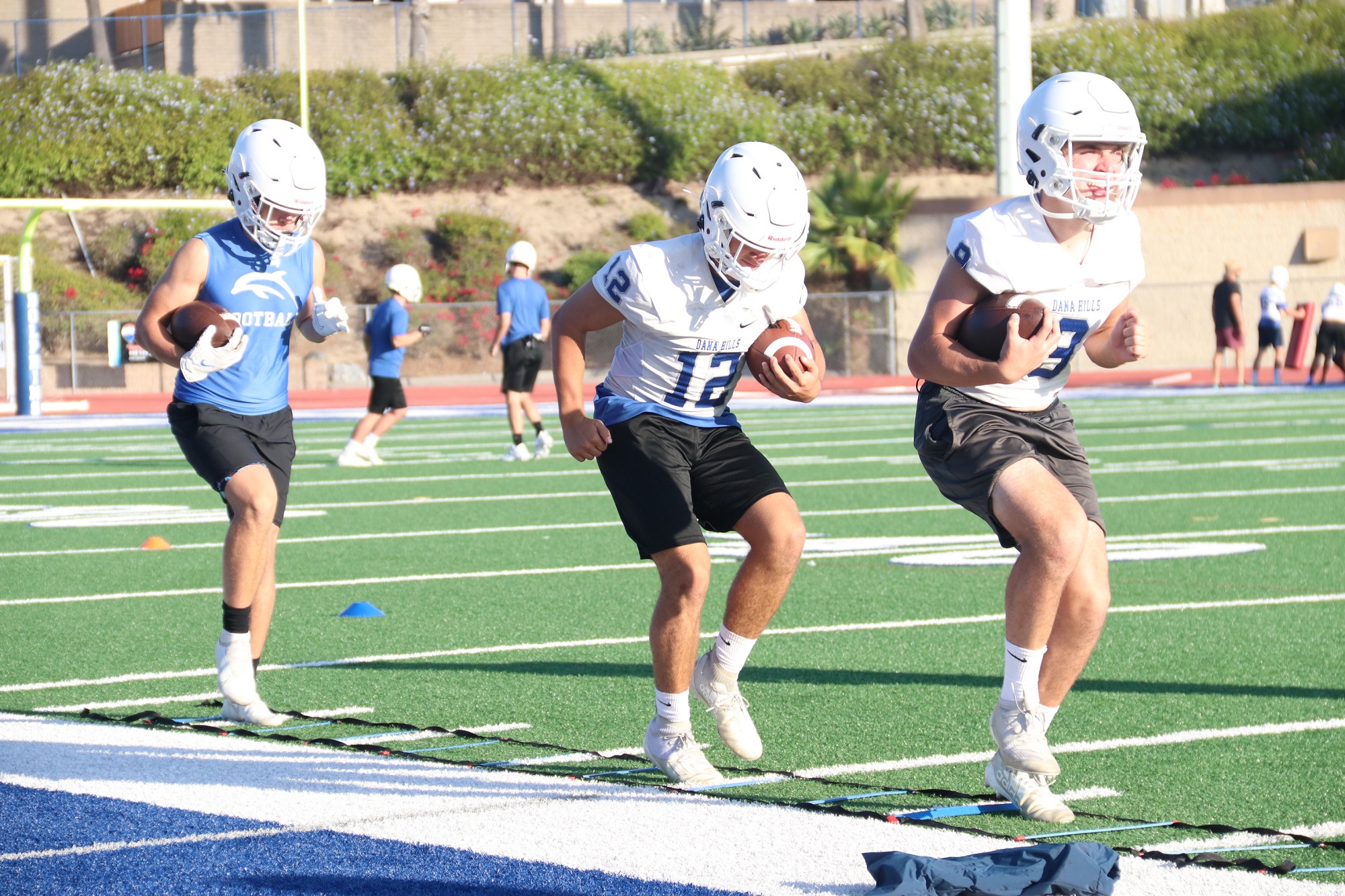 It was a tough spring season for Laguna Beach. The Breakers opened with a promising 40-0 win over Jurupa Valley, but Laguna Beach struggled against its Golden West Conference and Pac 4 League foes. Laguna Beach lost one-score games against both league opponents.

The standout for Laguna Beach and its star returner is quarterback Will Bingham. Laguna Beach has developed as a program with a strong passing attack, and Bingham completed 51% of his passes for 1,133 yards and eight touchdowns. However, Bingham was turnover-prone, with 12 interceptions.

This will be a reunion game on a couple of fronts for Dana Hills.

It will be the Dolphins’ first game against a Sea View or South Coast League opponent since leaving the Coast View Conference for the now-Pacific Coast Conference after the 2019 season. The game will also be a return for head coach Tony Henney, who led Trabuco Hills to a CIF-SS title in his only season at the school in 2014.

Junior Will Burns, a transfer from Mission Viejo, is slated to be the Mustangs’ starting quarterback.

This game will be another reunion for Dana Hills, as former head coach Phil Skinner is now an assistant coach for the Wolverines.

The Wolverines will have new faces at nearly every position, but Aliso Niguel does return junior quarterback Shaun McCaghren.

Due to roster size, injuries and lack of available players, the Warriors only played their first two games of the season, and then Woodbridge canceled all of its league games. In the games in which Woodbridge did take the field, they lost both, including a drubbing by the Dolphins.

Woodbridge will practically have an entirely new team, but one major returner is at quarterback in senior Danny Jazdzyk, who completed 4 of 9 passes for 68 yards and a TD against Dana Hills last season.

Like Woodbridge, University was a team that lost its two nonleague games and was forced to forfeit its two league games due to injuries, roster size and lack of available players. To put in perspective where the Trojans were last season talent-wise, their second game was a 49-2 loss to Northwood, which also had to cancel its league slate for the same reasons as Woodbridge and University. The Trojans were also 0-10 in 2019.

University has a new coach in Vince Mesa, who was previously an assistant at Orange Coast College.

Beckman was majorly affected by the schedule of musical chairs created by Woodbridge, University and Northwood canceling games. To illustrate how volatile Beckman’s schedule was last season, the Patriots ended up playing a regular home-and-home series with Portola in back-to-back weeks. Somehow, Portola and Beckman split their two meetings by similar scores: a 27-7 Beckman home win and a 20-6 Portola home win.

Beckman focuses on the ground game, as the program runs an option offense. The Patriots graduated both of their quarterbacks and top rushers from last season.

Dana Hills and Northwood did play a thriller back in 2019 that the Dolphins won, 35-28. That 2019 game at Dana Hills was the coming-out party for Bo Kelly, who passed for 229 yards and the winning touchdown.

The Vaqueros were a strong group last season with a balanced offense that was producing just more than 35 points a game. Irvine won the Pacific Valley League, and because of the schedule fallout, Irvine scheduled Dana Hills in a season finale that was a quasi-conference title game with two league champions squaring off.

Irvine beat Dana Hills by going 60 yards in the final 16 second of the game to score a touchdown as time expired.

Irvine graduated its starting quarterback and top receiver, but the top rusher returns.

The Hawks are under new management this season, as longtime assistant coach John Lester is now the head coach at Laguna Hills. Lester is in his second stint at Laguna Hills and was the offensive coordinator for the Hawks’ 2008 CIF-SS championship.

Laguna Hills tied Dana Hills and Portola for the Pacific Hills League title last season and lost to the Dolphins on a goal-line stand.

The leading returning player for the Hawks is junior running back Troy Leigber, who does a bit of everything on both sides of the ball for Laguna Hills.

Portola clinched its second straight league championship last season in only its third year of varsity football. Portola’s win over Dana Hills came down to a goal-line stand in overtime, but the Bulldogs couldn’t grab the outright title, as Laguna Hills made its own goal-line stand against Portola. The margin of this league was razor-thin in the spring season.

Portola commits to its ground attack out of the Wing-T offense, returning its top rusher from last season. Senior Nova Kebeli ran for 658 yards and seven touchdowns on 126 carries.