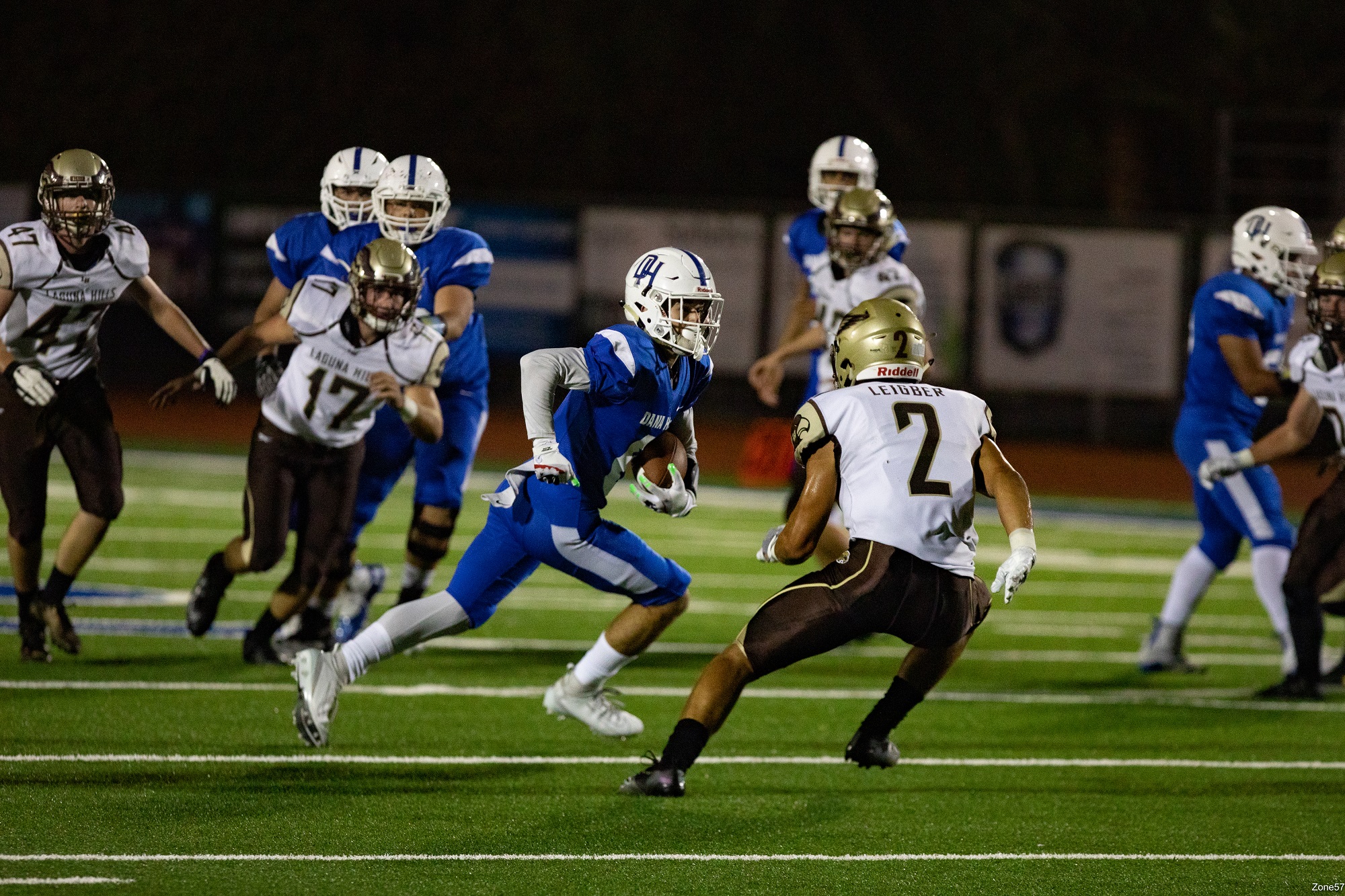 One way or another, the 2020 football season was always going to be a strange experience for the Dana Hills football team.

Before the coronavirus pandemic sent the world off-kilter and pushed the fall 2020 football season into spring 2021, the Dolphins football program was setting off on a new path, away from age-old rivalries and the neighborhood battles.

“We’re happy in the conference in everything else,” Dana Hills athletic director Tom Faris said of the move when announced in 2019. “We’re going to continue to try and build the program, and we needed to get relief for a little while.”

Dana Hills’ nonleague schedule will include nearly all of the other side of the conference with Irvine, Beckman and Woodbridge. This year’s matchup with Irvine is a scrimmage on Friday, March 12. University is the only Pacific Valley team not on the Dolphins’ schedule this season.

This is just the latest and biggest move made to change the course of Dana Hills football, which comes at a “strike while the iron is hot’ moment in the program’s history.

Last season, the Dolphins posted the best start in school history by winning their first six games, including wins over Pacific Coast League teams Irvine and Northwood. The Dolphins were scoring points in bunches and led by an aggressive defensive front that set school sack records.

Then their league schedule hit, and after dropping their league opener to Laguna Hills by one point in overtime, the Dolphins faded to a winless league record. Despite a winning record overall—Dana Hills’ first since 2009—the Dolphins missed out on the playoffs once more.

Like most “program-best” groups, the Dolphins lost impact seniors at key positions, but Dana Hills is also set up with some of its most dynamic players returning. With those returners soaking in the experience of last year’s start, the Dolphins are set up to make some noise.

Leading Dana Hills on offense is junior quarterback Bo Kelly, who split time as the starter last season and showcased a strong arm and confidence. Kelly excelled as a sophomore, as he completed 44% of his passes and threw for more than 1,000 yards and seven touchdowns.

Kelly will be throwing to a senior group of receivers, including Noah Simpson and Will Craven. Simpson is a dynamic player who led the Dolphins in all-purpose yards and contributed with kickoffs and punt returns. Simpson caught a team-high 46 passes for 515 yards and five touchdowns. Adding to the group of receivers is Mission Viejo transfer Omar Black, who will bring an extra element of speed.

For Kelly, Simpson, Craven and the other offensive returners, another year means another season of getting immersed into offensive coordinator Curtis Madden’s offense. Madden, in his third year at Dana Hills, also gets a promotion to co-head coach alongside co-head coach Phil Skinner, who is in his 14th year with the Dolphins. With Skinner at the helm, the hiring and infusion of Madden has helped bring the accountability and culture of the Dana Hills football team to a higher level.

Also joining the Dana Hills coaching staff is former Northwood coach Paige Nobles, who will assist the defense, and former NFL quarterback Rob Robbins, who will work with Kelly and the quarterbacks.

Stepping up on the coaching staff is new defensive coordinator Khalil Watson. Watson is in his second year with the Dolphins and takes over for Brad Carter, who took the head coaching position at Cerritos High School.

While the 2019 defense led from the front, this season’s Dolphin defense will lead from the secondary position, as senior Lukas Saavedra locks down in the secondary. Saavedra led Dana Hills with two interceptions last season and racked up 39 tackles.

With all the elements wrapped together and a blank slate in the Pacific Hills League, the Dolphins have an opportunity to continue the program’s growth, and while there’s no playoffs to compete for, a league title isn’t far out of the question.

Dana Hills lost by the slimmest of margins to Laguna Hills last season in the Sea View League, but the Hawks will be without their do-everything star Mitch Leigber, who opted out of the season to prepare for his college career at Stanford.

Portola won the Pacific Coast League last season in a surprise. The Bulldogs are only in their third year of varsity football, and their top players all graduated.

Finally, in Northwood, the Dolphins will see a team they beat in overtime. However, the Timberwolves lost only one league game—against Portola—and ultimately made the Division 12 playoffs, where Dana Hills would have been had they qualified.

The Dolphins have the motivation, they have the talent, and they have the opportunity to blaze a new trail ahead in a new conference with a new culture.