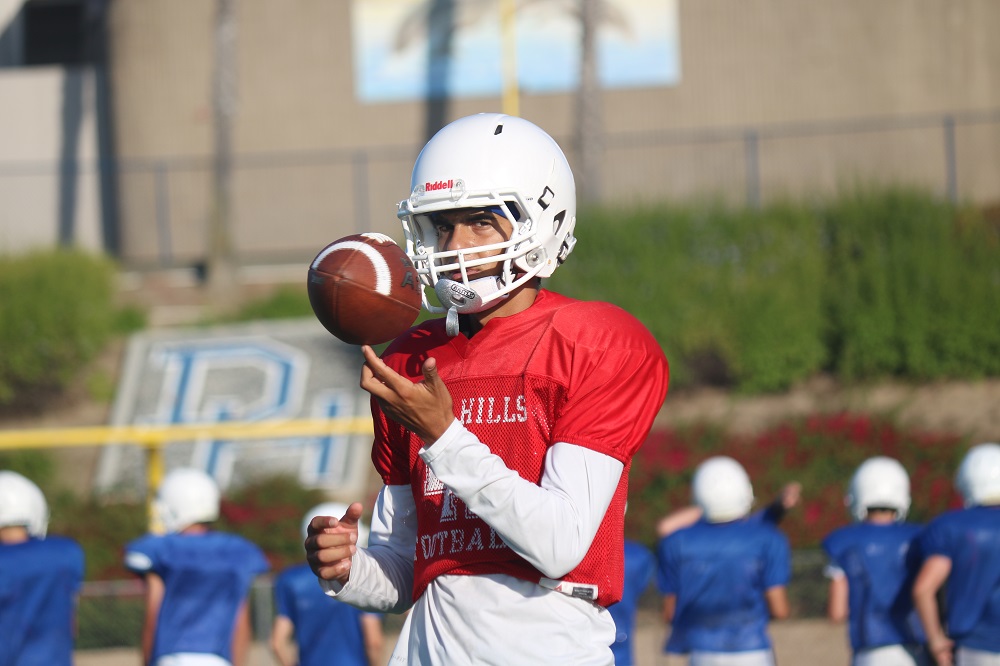 Words and Photos by Zach Cavanagh

Boersma was a force last season on the edge. Boersma set the team records in tackles for loss, blocked kicks, blocked passes and racked up sacks. He should be even more of a threat with 25 pounds of muscle added to his 6-foot-4 frame. Boersma will also catch passes on offense.

Saavedra was described as a “light-’em-up type of kid” on defense by Coach Phil Skinner. Saavedra is a strong athlete that grew in height and weight over the offseason and will play both ways for the Dolphins. Saavedra will show off a strong receiver-passer connection with his brother Zackary.

Saavedra will be in the middle of things on both sides of the ball. Saavedra is a key component of the secondary and the returning starting quarterback. Coach Skinner said Zackary “plays quarterback from a hitting standpoint.” Saavedra said he embraced his role as a leader this offseason.

Shultz led the Dana Hills defense in tackles last season with 67 solo tackles and 90 total. Shultz isn’t the biggest linebacker at 5-foot-10, 155 pounds, but Coach Skinner called him the biggest hitter on the team. Shultz fills in on run defense with a forward and hard style.

Simpson will be all over the field for Dana Hills this season. Coach Skinner called him the team’s best all-around athlete. Simpson will use his speed in the secondary, and he’ll also be used in a variety of ways on offense. Simpson takes on the role as a possession receiver.

Allemann has stood out early in camp for Dana Hills, and it’s easy to see why. As a 6-foot-4 sophomore, Allemann knows how to use his height and length to get the ball at its highest point. Allemann will be a go-to receiver for the Dolphins and an impact player.

Gartlan is one of the fastest Dolphins on the field. Gartlan will factor as the primary running back for Dana Hills after being the No. 2 rusher for the Dolphins last season. Another Dana Hills player going both ways, Gartlan will take snaps at outside linebacker on defense.

Lyon is an all-around player for the Dolphins. He will line up part-time on defense, and his arm may even get some use in a quarterback package. Lyon will also see time on special teams. Lyon will primarily line up as a receiver. One way or another, Lyon will get involved.

Pierce is a valuable addition to the Dana Hills offensive line. He is a transfer from San Juan Hills and brings size at 6-foot-5 and 235 pounds, skills already honed and a ready knowledge of the Sea View League. Pierce has already taken on a leadership role early on.

Vallejo is a two-way lineman for Dana Hills, but he will primarily get his reps at offensive tackle. Vallejo and new transfer tackle Aidan Pierce solidify the ends of the Dolphin line. Vallejo will be a leader for the group up front, as Dana Hills looks to get its offense going.