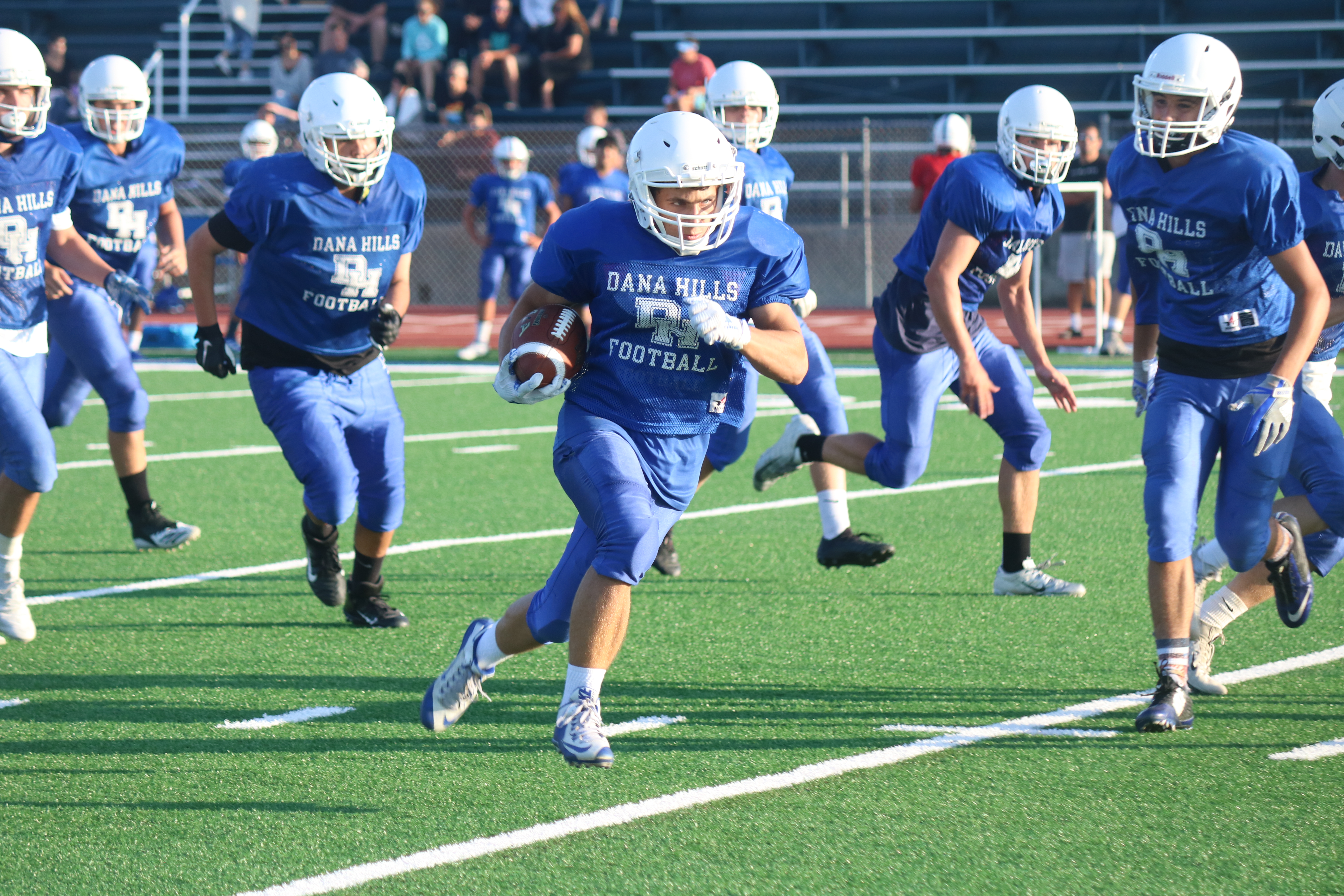 Dana Hills and Los Amigos will come into this season opener with plenty of motivation.

Both teams will be looking to bounce back after disappointing 2018 campaigns. Dana Hills also will look to avenge a tight loss last year, but the Lobos will have a more emotional push.

Los Amigos’ previous head coach of 11 seasons, Carl Agnew, resigned at the end of last season. Defensive coordinator Harold McDowell was hired to take over in February, but then in April, McDowell suddenly passed away.

After posting its best record since 2010 and recording its best playoff performance since 2012, Northwood is now on its third coach since 2014.

Northwood could be poised to repeat or further its success from last season with major returners in place.

To say that Saddleback struggled to open last season may even be underselling it.

The Roadrunners, then in their first season under Coach Nick Diulio, were shut out in six of the team’s first eight games and overall were outscored by a combined total of 341-14 in those eight games, including a 46-0 win by Dana Hills.

Saddleback ended last season on a high note with back-to-back wins and hopes to ride that momentum and coaching consistency into this season.

Laguna Beach is looking to build off one of the better seasons in school history.

The Breakers won 10 games for just the fifth time in the school’s 85-year history and for the first time since 2012. Laguna Beach also made its deepest playoff run since 2011, with a push to the Division 12 semifinals.

The Breakers lose some top skill players in their leading rushers and receivers, but the Laguna Beach offense will be anchored by senior quarterback AJ Johnson. Last season, Johnson threw often and completed 56% of his passes for 3,246 yards and 42 touchdowns.

Irvine finished second in the Pacific Coast League last season and advanced to the second round of the Division 11 playoffs, but the Vaqueros find themselves under new leadership in 2019.

Irvine has holes to fill, as the Vaqueros’ starting quarterback, leading rushers, leading receiver and leading tacklers all graduated. No. 2 receiver Jacob Sears returns as a senior.

When Ocean View won last year, it won big. The Seahawks won by no fewer than 28 points and won by an average of 31 points per game, including their lone shutout against Dana Hills. It was a high-water mark for the program.

Ocean View’s only losses came to Laguna Beach, which forced a three-way tie for the Pac 4 League title, and to Irvine in the first round of the Division 11 playoffs.

However, going into 2019, the Seahawks will be hard-pressed to replicate that success. Ocean View lost its starting quarterback, top four rushers and top receiver to graduation.

Laguna Hills finished right in the middle of the Sea View League with big wins over the bottom two, Dana Hills and Trabuco Hills, and big losses to the top two, Aliso Niguel and San Juan Hills.

While overall their record wasn’t great, the Hawks can be optimistic with the league success achieved with eight sophomore starters, three of whom earned all-league honors.

One of those sophomores was leading rusher Mitch Leigber. Leigber ran for 616 yards and three touchdowns and had three 100-yard games, including 223 yards against Trabuco Hills.

Mark Nolan is the new coach of the Mustangs and is the fourth new coach at Trabuco Hills in six seasons. Nolan replaces John Abdelnor, who posted three straight 3-8 seasons.

This is Nolan’s first California high school job after coaching in Arizona and Colorado.

Nolan will have a fresh team to work with after graduation of the starting quarterback and leading rusher. Top receiver Jake Naso and leading tackler Chris Crow return. Naso had 21 receptions for 472 yards and five TDs, and Crow led with 41 total tackles.

Aliso Niguel finished in second place in the Sea View League last season and advanced to the second round of the Division 9 playoffs.

Although the Wolverines lose their starting quarterback and leading tackler, Aliso Niguel still has major skill players returning for a run at the Division 8 playoffs.

The Stallions won all four league contests by an average margin of 40 points and posted back-to-back shutouts against Aliso Niguel and Dana Hills. San Juan Hills will be tested in nonleague and will use league play to gain momentum for a potential run in Division 3.

Joey Hobert is the all-everything player for the Stallions and is the reigning league MVP. Hobert runs, receives, kicks, plays defense and occasionally takes snaps at quarterback.