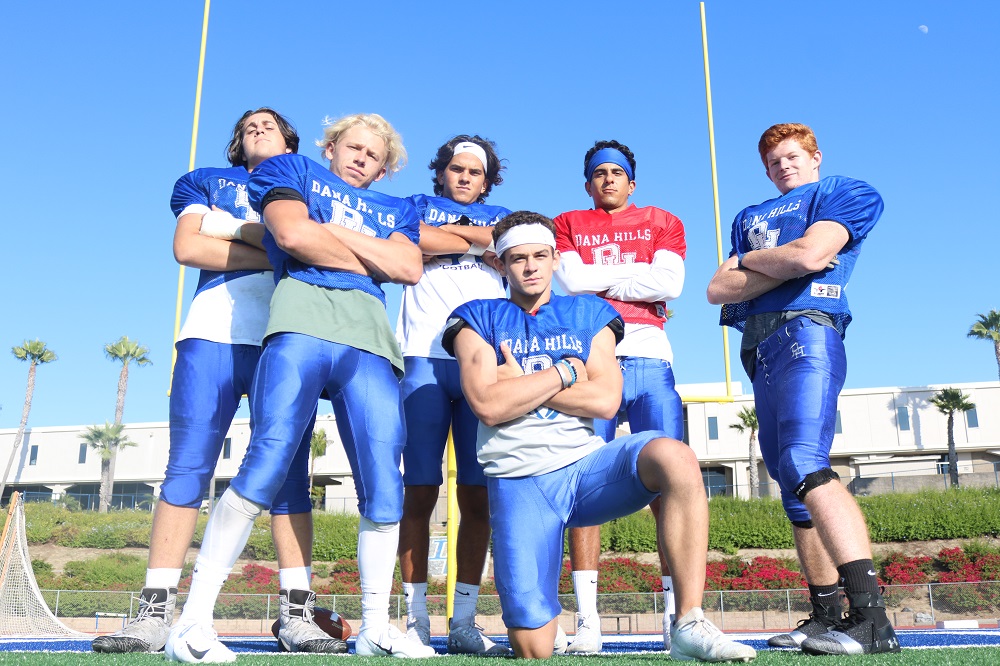 Words and Photos by Zach Cavanagh

In our annual Dana Hills High School football preview we delve into everything you need to know about the upcoming Dolphin season. Scroll through the PDF version of this week’s issue HERE for more photos and interviews.

Dana Hills football’s mantra for the 2019 season is keep everything “above the line.”

It’s a phrase assistant head coach and offensive coordinator Curtis R. Madden II adopted and presented to the team from former Ohio State football coach Urban Meyer’s book, Above the Line: Lessons in Leadership and Life from a Championship Season.

The phrase applies two-fold to the Dolphins.

On the scoreboard, Dana Hills is looking to stay above the .500 line. The Dolphins pushed above .500 for the first time at any point in a season since 2013 by winning two of their first three games last season. However, Dana Hills’ shutout win over Saddleback for its second win of the season was the high point of 2018, as the team lost its final seven games.

The 2013 Dolphins were the last Dana Hills team to finish the regular season at .500 (5-5) and the last to make the playoffs. The Dolphins have won just seven games in the past five seasons. Their last winning season came in 2009.

In a push to change those fortunes and the culture that has beset Dana Hills football, the coaching staff and players are applying the phrase as Meyer put it in his book.

“You look at chipping on another guy,” Dana Hills coach Phil Skinner said, “blaming this, blaming that, losing team continuity; that’s below-the-line behavior. We talk about above-the-line behavior—what would be the right thing to do and raise your teammate up?”

Skinner said he and his staff have taken that to heart in the way they approach games and practice. The staff has some new additions, but it also has some much-needed consistency at the top with assistants and coordinators.

“We did a lot of self-examination. With the right staff, you can do that,” Skinner said. “Things get a little heated, feelings may get hurt, but that doesn’t matter. We put things aside, and say this is what we need to do to better ourselves.”

“We’ve had good times way back when,” Skinner said. “We’ve had a rough stretch. Before the good times, they had a long rough go, too. There’s always that community mentality saying that ‘Dana Hills, they’re not going to be very good.’ There would always been influences as to why they can’t. We’re trying to get them to believe why they can. That’s the cultural shift.”

The cultural shift is beginning to take shape.

It’s starting with consistency among the coaches, specifically coordinators, and some success in summer 7-on-7 passing leagues. The coaches are strong on schemes and earnest in their belief of the players, and that has filtered down to the players.

“There’s confidence in the players and coaching staff,” senior defensive end Liam Boersma said. “Last year, we had a lot of instability. This year, we seem to be a lot more connected and locked in. There’s a lot more brotherhood. We trust each other more than ever.”

The brotherhood is echoed by Boersma’s teammates and manifested by a noticeable energy in practices.

“I think we are coming together as a whole,” senior quarterback Zackary Saavedra said. “Last year, we were kind of playing individually. We had those skilled players, but we weren’t playing as a whole team. We’re only as strong as our weakest link.”

The team’s skill players built their brotherhood and gained more belief through a bevy of seven-on-seven competitions over the offseason.

Seven-on-seven is essentially two-hand touch football without any of the linemen. It can be a tricky way to judge a team, because the games lack the sport’s trademark physicality, and any coach will tell you how important linemen are to a team’s success. However, it was essential in building confidence of a team with plenty to offer in the outside positions.

“Sure, its 7-on-7,” Skinner said. “It’s not really football; it’s not Friday night games. At the same time, they are fully competitive against other great high schools. They beat Servite. They beat Villa Park. They’ve beat pretty good football teams in 7-on-7. Our skill kids have had that taste that they can (succeed).”

Skinner said of the 63 seven-on-seven games the Dolphins played over the offseason, they won 56 of them.

That is a tribute to the growth of Saavedra at quarterback, as well as the stable of weapons at his disposal.

“He’s taken a huge step forward as a leader,” Madden said of Saavedra. “We did seven-on-seven quite a lot this year and did quite a lot of classroom work teaching them better tools with how to read the defenses pre-snap and post-snap, giving them concepts that are very easy to fit their skill set. He’s really taken charge.”

Dana Hills has plenty of speed on the outside in players such as juniors Noah Simpson, Kellen McGrath and Seth Lyon and senior Trevor Gartlan. Skinner said Simpson will get the ball in a variety of ways, and Gartlan is a speedster at running back. The receivers also add sophomore James Allemann, who has the height at 6-foot-4 to be a potential impact player now and in the future.

While they don’t get to play in the seven-on-seven with the rest, the Dolphins have two anchors on either side of the offensive line in seniors Tanner Vallejo and Aidan Pierce. Vallejo is a returning leader up front, and Pierce is a transfer from San Juan Hills that has come in to take on a leadership role, as well.

Skinner believes his group will be able to spread the ball around with the passing game, and the line will be relied on to protect the quarterback and take advantage of a light front with the running game.

The Dana Hills defense will benefit from a second year of defensive coordinator Brad Carter.

“We will have a lot of movement on the front,” Skinner said. “Coach Carter has really stepped up his game, especially with his stunts up front. You’ve got a player like Liam (Boersma) and a lot of the linemen and linebackers—you have to create chaos on the offensive line, cause disruption.”

The focal point on the defensive front will be Boersma. The defensive end was a bright spot for Dana Hills as a junior as he set the team records in tackles for loss, blocked kicks, blocked passes and sacks. With 25 pounds of muscle added to his 6-foot-4 frame, Boersma will be vital to the Dolphins’ efforts.

Skinner described his defense as full of speed and “pretty good hitters.”

Senior linebacker Sam Shultz may be the biggest hitter of the bunch. Shultz led Dana Hills in tackles last season.

Players including Zackary Saavedra at safety, Lukas Saavedra at defensive back and Simpson at safety will play both ways for the Dolphins, again showcasing a stable of athleticism.

“We like to be platooned as much as possible,” Skinner said, “but the bottom line is, I learned a long time ago if you see some of your best players standing on the sideline next to you, you’re a terrible coach.”

Dana Hills has the athleticism, has embraced the new approach and gained the belief. With the schedule ahead of them, the Dolphins have set their goals, and they’re aiming for the playoffs.

“We want to take this season deeper than the 10 games as we have them,” Skinner said. “It’s because the kids finally understand and believe that they can do it.”

There are three teams with new coaches in Dana Hills’ nonleague schedule and plenty of teams dealing with the same roster numbers as the Dolphins. The top teams of the Sea View League—Aliso Niguel and San Juan Hills—may be out of reach, but Dana Hills is in the same boat with Laguna Hills and Trabuco Hills.

For Skinner, it’s all about mentality. The Dolphins have a manageable schedule, but in a building process, adversity is still going to arrive.

“There’s going to be hard times,” Skinner said, “but we cannot have below-the-line thinking. We have to have above-the line thinking, rise above and prevail.”