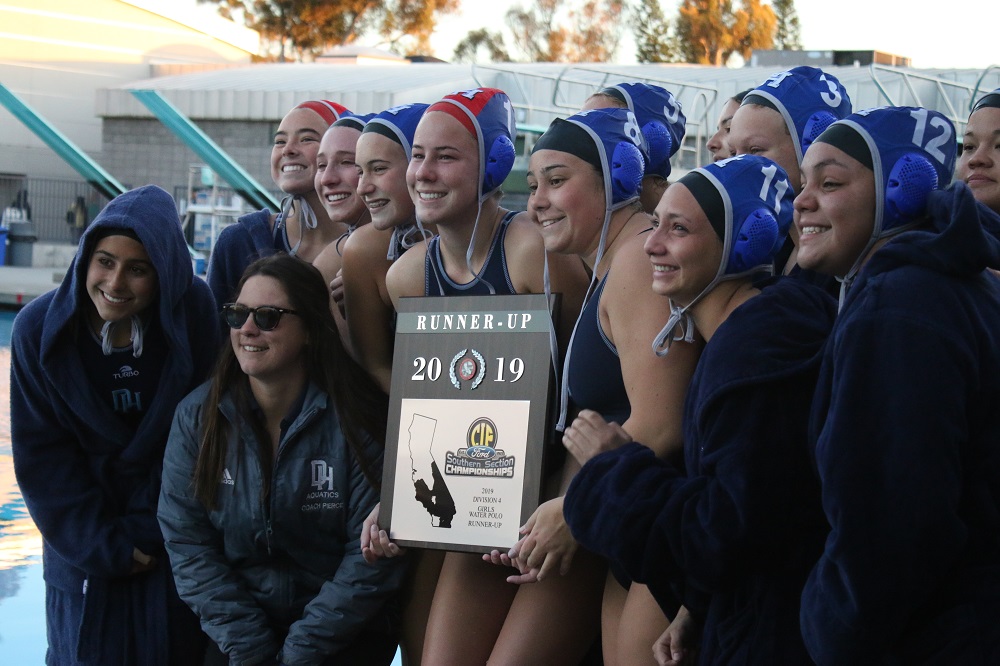 Another year brings another round of spectacular athletic achievements from the teams and athletes of Dana Point. From record-setting performances and championship appearances to the celebration of legends, Dana Point put its best sporting foot forward.

Here is a look back at some of the best Dana Point sports moments of 2019:

It was a successful winter sports season at Dana Hills High School. The Dolphins boys and girls basketball teams, boys soccer team and girls water polo team were highly competitive in their leagues and all qualified for the CIF-SS postseason.

The Dana Hills girls water polo team advanced to its first CIF-SS championship game with a 11-9 win on the road over Pasadena Poly in the Division 4 semifinals. The Dolphins’ semifinal appearance was only the second in program history. Dana Hills was edged in the final by La Quinta, 11-8.

Dana Hills then-junior, now-senior Josh Harkey won the CIF-SS Coastal Division championship at 182 pounds. It was the Dolphins’ first CIF-SS division title since 2007. Harkey went on to finish third at the CIF-SS Masters and qualify for the state championships.

The Dana Point Outrigger Canoe Club helped out a group of 13 students from Platte Canyon High School in Colorado in constructing their outrigger. The group camped out at Doheny State Beach to train for a 70-mile race in Tacoma, Washington.

Dana Hills honored a group of 24 seniors who signed their National Letters of Intent to continue playing sports at the next level. The Dolphins had athletes sign on to play in 10 different sports at 21 different colleges and universities.

In the second year of its all-star selects program, the Dana Point Youth Baseball 11U Tsunami team won the PONY West Zone SoCal Central Region Bronco 11 Division District championship. It was the first district title “in recent memory” for the DPYB organization.

Chase Strumpf Selected in Second Round of MLB Draft

Dana Point native and JSerra alumnus Chase Strumpf was selected 64th overall by the Chicago Cubs in the second round of the MLB Draft. Strumpf, then a junior at UCLA, went on to play in the Arizona Rookie League and for the Class A Eugene Emeralds.

The Dana Point Youth Baseball’s 10U Tsunami capped a successful postseason for DPYB with a run to the PONY West Zone SoCal Central Region Mustang 10 tournament. The 10U team advanced on strong offensive performances before the final.

After a one-year hiatus due to field renovation at Dana Hills High School, the Shootout for Soldiers 24-hour charity lacrosse event returned to Dana Point. The event raised nearly $40,000 for veterans and active-duty military members with 23 one-hour lacrosse games and a skills clinic.

The Dana Hills football team used a balanced offensive attack and a suffocating defensive effort to defeat Los Amigos, 27-7, and take their first season opener since 2010. The win also gave the Dolphins their first winning record at any point for the second time since 2013.

Oz Simmons, who coached volleyball at Dana Hill High School for 35 years until his retirement in 2018, died of cancer at age 62. Simmons was later celebrated by a full Dana Hills gym, with many friends, colleagues and players clad in his famous Hawaiian shirt and sandals attire.

The Dana Hills football team improved to 6-0 for the first time in program history with a 20-7 win at Ocean View. Dolphins senior Liam Boersma collected three sacks to hit 18 ½ on the season, breaking a 10-year-old school record. Boersma finished with 22 sacks in 10 games.

The Dana Hills boys cross country team capped its extraordinary season with an eighth-place finish at the Nike Cross Nationals in Portland, Oregon. Senior Carrick Denker led the way in 43rd place. The Dolphins qualified by finishing second at the state championships.