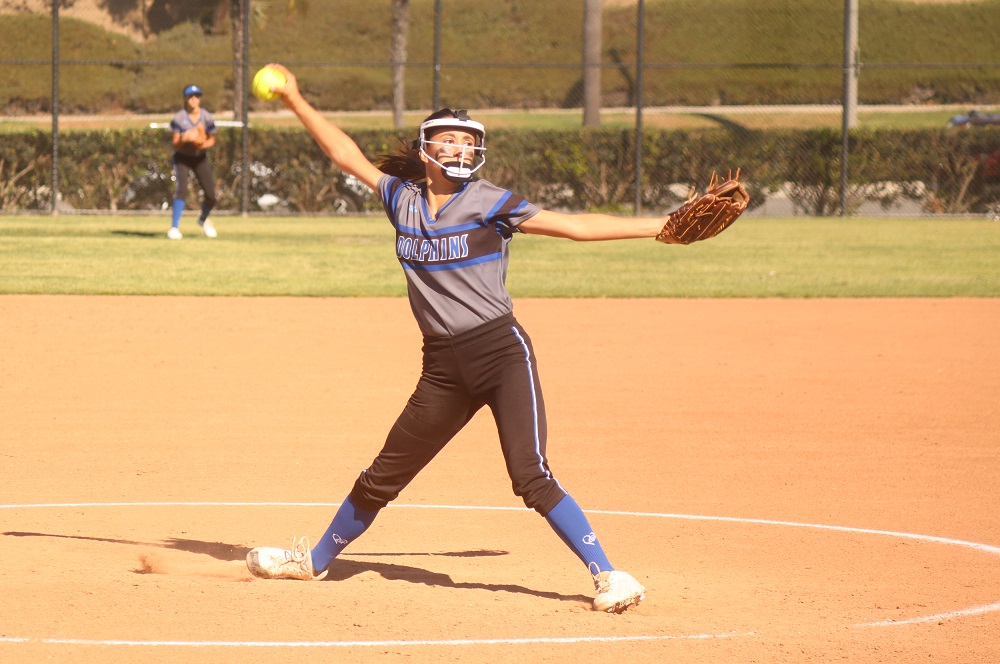 Spring has sprung earlier than usual in the world of high school sports.

Not only was the CIF calendar bumped up across the board this school year, but baseball and softball got an even earlier jump on their seasons. Both were allowed to play their first games on Feb. 9, which was two weeks earlier than last year’s first pitches. The earlier start makes sure any potential CIF-SS championships will finish before the school year ends, but it has also run both sports into winter storms.

Tennis opened Feb. 11; track and field, swimming and volleyball opened Feb. 16; and the lacrosse and golf teams will open their seasons on Feb. 23.

Spring is a busy season on the fields and courts and in the pool, so let’s check in on where 10 spring sports teams stand at Dana Hills High School as the season opens.

For in-game updates, scores, news and more for all of the Dana Hills spring sports programs, follow us on Twitter @SouthOCSports.

The Dana Hills baseball team got a glimpse of its future as last season ended.

The Dolphins, then the No. 2 representative from the Sea View League, battled with South Coast League champion El Toro in the first round of the CIF-SS Division 1 playoffs. Dana Hills ultimately fell, 3-1, but the Dolphins could take solace in how they reached the game.

Dana Hills’ best players were all underclassmen. There were strong senior leaders, to be sure, but the Dolphins were led by their youth, which gained valuable experience in their league race and playoff matchup.

Dana Hills now moves back up to the South Coast League, where it will tangle with the likes of El Toro.

The Dolphins will be led by senior captain Zach Waters. Waters was first on the team last season with 23 RBI and 35 hits. He also hit .365 with two home runs, seven doubles and 16 runs scored.

As a sophomore, Thomas Buckanavage was second on the Dolphins with 20 RBI, 17 runs scored and 27 hits. He also led the team with eight doubles and five stolen bases and added two home runs.

Dana Hills’ top hurler last season was Dante Jackson. On the mound as a sophomore, Jackson earned six wins with a 1.99 ERA and 58 strikeouts in 10 appearances.

Dana Hills is 2-2 on the early season with wins over El Modena and Los Alamitos in the Loara Tournament. The Dolphins open South Coast League play on Feb. 27 at home against Capistrano Valley.

Dana Hills will also take on Servite at home on March 27 and Mater Dei at the Great Park in Irvine on April 13.

The Dana Hills softball team was on the verge of winning back-to-back Sea View League championships last season. All the Dolphins had to do was win the season finale against Tesoro, a team they had shut out earlier in the season.

However, in an extra eighth inning, Tesoro beat Dana Hills, 6-5, and the Dolphins had to settle for second place in the Sea View League.

The Dolphins were an extremely senior-heavy group, and as Dana Hills moves up to the South Coast League, it graduates its top six RBI leaders from last season. The Dolphins will look for offense from a young group.

Stillwell is one of three captains, along with seniors Sam Montero and Terra Goetz.

Goetz was the Dolphins go-to pitcher in the circle last season.

Dana Hills has put together a 1-2 record to start the season, including a 5-4 victory over Beckman on Feb. 19.

Against Beckman, sophomore Piper Tago led the way by going 2 for 2 with a home run and four RBI. Goetz went 1 for 3,  drove in a run and scored a run, while freshman Kaci Palmer scored twice.

Dana Hills continues in the Northwood Tournament against Woodbridge on Friday, Feb. 22 and El Modena on Saturday, Feb. 23.

The Dana Hills boys golf team has to start counting on the other hand.

The Dolphins clinched a fifth consecutive South Coast League title last season and finished in the top four of the CIF-SS South Coast Division for a fifth straight season.

While the team just missed advancing, Dana Hills can be confident as all of its best players return, and each took turns posting the low score over last season’s league schedule.

Bannister led Dana Hills at the CIF-SS South Coast Division tournament with the Dolphins’ only score under par, a 1-under 71.

The Dolphins had three sophomores in their starting lineup, and at times, it showed.

Dana Hills compiled a 13-12 record overall and a 3-5 record in the South Coast League.

But going through the South Coast League is one way to gain tons of experience. Raucous gyms like the one at San Clemente play host to tight and competitive matches each and every night. It’s a pressure cooker of Orange County volleyball that can help any volleyball player elevate his game.

While the Dolphins lose some impact seniors, the sophomores of last year are ready to step into new roles and will be counted on for success.

Nick Rigo and Chase Morrison are two of the then-sophomores, now juniors who started a year ago.

Dana Hills is 2-2 to start the season, with wins over El Dorado and Woodbridge in the Tesoro Tournament and losses to Esperanza and Servite.

The Dolphins continue in nonleague play at Santa Margarita on Feb. 26 and at Laguna Beach on March 5.

The Dolphins had a tough schedule, both nonleague and league, and a team that was rebuilding after years of success.

Now seniors, Riley McCall and Taylor Stephens will lead the Dolphins in singles play. They’ll need to set the tone for Dana Hills to find success this season.

Dana Hills stays in the South Coast League this season, along with mainstays San Clemente and Tesoro and newcomers Aliso Niguel and El Toro.

The Dolphins’ early matches were canceled due to rain, but Dana Hills should get back on track at Woodbridge on Feb. 26. The Dolphins continue in nonleague play against Edison on March 5, at Corona del Mar on March 6 and at University on March 7.

Dana Hills opens South Coast League play at Aliso Niguel on March 12. The Dolphins travel to San Clemente on March 19 and host the Tritons on April 11.

The Orange County champion boys side of the Dana Hills track and field team was hit hard by graduation.

Last season, the Dolphins were able to diversify their efforts with strong and versatile competitors in various events. While the distance runners are and will always be there, the Dolphins will need to replace most of their formidable relay teams. They also lose a top thrower.

If winter results are truly an indication of spring success, the Dolphins have found athletes to step up and will be just fine.

On the track, senior Nathan Fatigate was the last remaining of the Dolphins’ South Coast League champion and CIF-SS Division 1 finalist 4×400-meter relay team. At the California Winter State Championships, Fatigate, on a team with John O’Melveny, Nicholas Kraushaar and Jordan Vuong, took fifth in the 4×200-meter relay.

In the 4×800-meter relay, the Dana Hills team with Carrick Denker, Payton Kubalsky and Cole Stark broke a meet record for the Winter State Championships.

In the distance races, the perennial league champion Dana Hills cross country team will make its name heard. Seniors Simon Fuller and Eddie Wagenseller will hold down the longer runs for the Dolphins.

In the field events, junior Will Riviere made some noise in the winter. Riviere set a personal record in the high jump at 6 feet, 3 inches.

The Dana Hills girls track and field team is only going to get better.

The Dolphins had four event wins at the South Coast League Finals en route to a second-place finish, and Dana Hills loses only one sprinter from its group.

Highlighting the Dolphins’ efforts on the track are senior Hailey Ray and junior Anisa Rind.

Ray and Rind also made up half of the South Coast League champion and CIF-SS Division 1 finalist 4×100-meter and 4×400-meter relay teams. Senior Ximena Bustos joined both teams, and junior Mia Lawrence joined on the 4×400-meter team. The Dana Hills 4×400-meter team finished eighth at state.

Dana Hills loses only one member of the 4×100-meter team, and the 4×400-meter team is completely intact and ready to take down the rest of the section.

In the distance races, junior Marisa Gaitan steps up after strong track performances last season and a solid cross country season in the fall.

Other Dolphins to watch are senior Maddy Mitchell in the throws and sophomore Avery Kramer in the pole vault.

The Dana Hills boys swim team got hit hard by graduation, losing CIF-SS champions and qualifiers. The Dolphins are only two seasons removed from their 2017 CIF-SS championship.

However, the future of the Dana Hills swim team can be found on its CIF-SS qualifying 200-yard medley team in senior Matthew Querner, junior Ryan Abdollahi and sophomores Evan Abdollahi and Steven Seibert.

The Dolphins opened the season on Thursday, Feb. 21 against Mater Dei, but results were not available at press time. Dana Hills will swim at the Capo Relays from Feb. 28 to March 2.

Dana Hills opens league at home against Laguna Hills on March 19 and hosts Tesoro on March 26. The Dolphins swim at San Clemente on April 16. The league championships will take place April 23-26.

The Dana Hills girls swim team was paced by plenty of youth in 2018.

As a freshman, Lucy Kao took second in the 50-yard freestyle at the South Coast League Finals. Kao qualified for CIF-SS in the event as well as the 100-yard butterfly and with the 200-yard medley and 200-yard freestyle medley.

The Dolphins also qualified in the 400-yard freestyle medley.

The Dolphins girls will follow the same schedule as the Dana Hills boys.

It was a young group, but a 6-2 start had Dana Hills moving in the right direction. The young group learned about how hard it is to win, finishing 1-7 in league.

Dana Hills moves into 2019 with a new head coach, Trent Cooper, and gets shuffled back down into the Sea View League.

The Dolphins open the season at home against Mission Viejo on Feb. 27 and travel to Northwood on March 5.