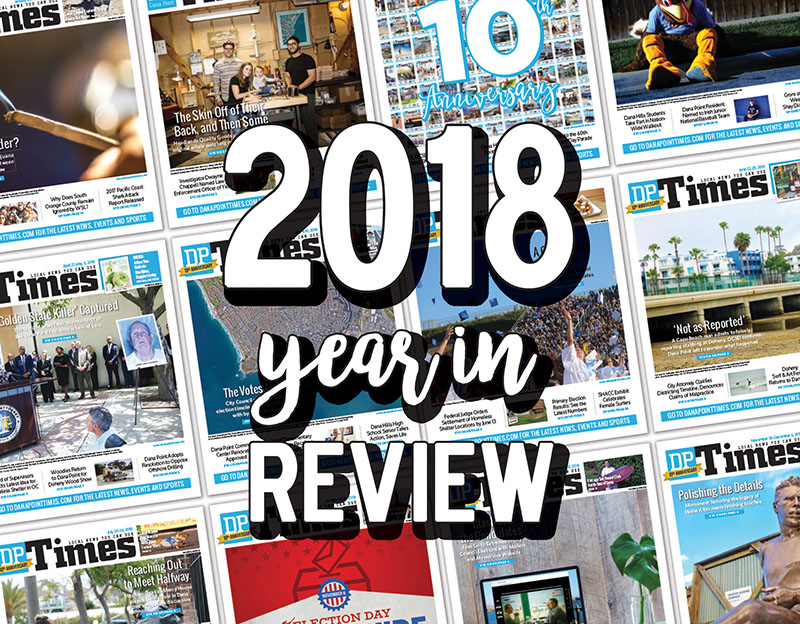 Jan. 26—The Dana Point City Council passed a city-wide ordinance on Jan. 16 that prohibits smoking on sidewalks, in alleys and in parking lots. The ban passed, 3-2, with then-Mayor Richard Viczorek and then-Mayor Pro Tem Joe Muller opposing. Councilwoman Debra Lewis introduced the idea of a smoking ban in May 2017 and reiterated her support before the vote.

Feb. 2—The city of Dana Point Clerk’s department received a letter from Russell Myrick of the RDM Legal Group in La Jolla, expressing their belief that “voting within Dana Point is racially polarized, resulting in minority vote dilution, and therefore Dana Point’s at-large elections violate the California Voting Rights Act of 2001 (CVRA),” according to the letter. Myrick’s claims of under-representation are based on 2014 data showing Latinos make up 18 percent of Dana Point’s 34,000 citizens. The letter pointed to the lack of Latino representation on city council. Carlos Olvera, who was elected in 2013, had been the only Latino in 20 years to secure a council seat. City council was given 45 days to hold a hearing and then 90 days to adopt an ordinance.

Feb. 16—Lieutenant Margie Sheehan of Orange County Sheriff’s Department was selected as Dana Point’s new Chief of Police Services. Sheehan, a veteran of the United States Marine Corps, has worked for OCSD for 23 years and has experience in special investigations, patrol operations, community policing and outreach, as well as crisis and emergency response. Sheehan took over for retiring Chief Russ Chilton in March.

Feb. 20—Dana Point City Council voted, 3-2, to amend the current charter and temporarily put Dana Point’s Financial Review Committee (FRC) on hold. Then-Councilman John Tomlinson proposed that the city council discuss changes to the FRC Charter to ensure it serves the purpose envisioned by the council, change the manner in how appointments to the FRC are made and directed that all FRC activities be put on hold until further actions are taken. Tomlinson added that the committee had become politicized. The FRC consisted of five members, each selected by a city council representative. Councilman Joe Muller emphasized that the FRC is not “disbanded; only amended.” The FRC has yet to commence since.

March 1—Dana Point Police Services met with several other law enforcement organizations at the Capistrano Unified School District to exercise a staged shooter scenario in light of the Parkland, Fla. school shooting on Feb. 14. A presentation was given at the CUSD Board meeting on March 7 on school safety.

March 14—Students within the Capistrano Unified School District, including at Dana Hills High School, participated in a nationwide walk-out to protest gun violence in schools. In accordance with state law, students were not disciplined for assembling, as long as they adhered to district and school guidelines.

April 24—The “Original “Night Stalker,” later known as the “Golden State Killer,” was finally taken into custody. Ex-police officer Joseph James DeAngelo, 72, was arrested on the night of April 24 in Sacramento on a warrant issued from Ventura County on two counts of murder with special circumstances, including murder during a rape and murder during a burglary. DeAngelo was named responsible for more than a dozen murders, more than 50 rapes and 120 burglaries in the state of California beginning in 1974.

On Aug. 12, 1980, the serial murderer known then as the ONS struck in the middle of the night, raping Dana Point resident Patrice Harrington and bludgeoning both Patrice and her husband, Keith, to death in their Niguel Shores home on Cockleshell Drive.

May 31—The draft Environmental Impact Report on the desalination plant planned for Doheny State Beach was released to the public. Plant operators are hopeful the plant could produce about 15 million gallons of drinking water per day.

June 13—Federal Judge David O. Carter ordered that sites for homeless shelters be determined by June 13 per his order made during a state conference in May. This came after a recent Grand Jury report was released, criticizing how Orange County handled homelessness in a document titled “Where There’s a Will, There’s a Way: Housing Orange County’s Chronically Homeless.” The report recommended the county and cities should develop a permanent supportive housing plan that’s proportionate to all cities, as well as establishing some kind of homeless joint-powers authority.

July 17—City Manager Mark Denny revealed that OpenGov, a financial transparency portal designed to bring more visibility and openness to government operations, is now online. This site provides the opportunity to view, filter, and analyze the city’s revenue, expense and balance-sheet financial data. Information is available for the past five fiscal years, dating back to 2014-2015. You can also download the data (e.g., in Excel) for offline analysis.

Aug. 3—Dana Point Times reported the completion of South Coast Water District’s first phase of a $100 million dollar tunnel project in South Laguna Beach. The five-year Phase I construction, which came in under budget, began in March of 2016 and included the creation of a new access shaft (104 feet deep and 20 feet in diameter) and a new access tunnel under Pacific Coast Highway from the shaft to the existing sewer tunnel (approximately 340 feet long, including the intersection). The contractor Drill Tech stabilized and enlarged approximately 611 feet of the existing sewer tunnel, which included the change-order work. Phase I work was completed significantly ahead of time in February 2018. To keep construction progressing during the bid process and award for Phase II, SCWD awarded a change-order to stabilize an additional 311 feet of the tunnel.

Aug. 4—At about 1 a.m. on Saturday morning, Aug. 4, three members of the U.S. Marines were stabbed in an altercation in San Clemente. None of the Marines received life-threatening injuries, but all three were taken to a local hospital and treated for their injuries. Alexis Aguirre, 24, of Dana Point was arrested for the stabbing by Orange County Sheriff’s Department. Aguirre faces a maximum 14 years in state prison for the charges. He pleaded “not guilty” during his arraignment.

Aug. 9—A contractor working with Holtec International spoke at a Community Engagement Panel meeting and accused Southern California Edison of not relaying information to the public about how a canister was put in a compromising position as it was being loaded. The incident sparked an investigation from the Nuclear Regulatory Commission, and spent fuel loading has been paused ever since.

Aug. 10—A 35,000-square-foot commercial development consisting of a 57-room hotel, 52-bed hostel, a 4,000-square-foot restaurant, a visitor center and a 174-stall parking garage to be constructed on a 1.6-acre vacant lot in Dana Point was approved by the California Coastal Commission (CCC) during its meeting on Friday, Aug. 10 in Redondo Beach.

Oct. 10—Capistrano Unified School District severed its relationship with the CUSD Foundation for Education after it was discovered a former president of the nonprofit had embezzled funds.

Nov. 2—A ceremony and press conference were held at the Dana Point Harbor for its master lease signing on Friday, Nov. 2. Orange County officials and Dana Point Harbor Partners celebrated the milestone of the 66-year agreement to invest $300 million. Community meetings planned around a harbor revitalization plan first began about 21 years ago.

Nov. 6 – Dana Point City Council incumbents Richard Viczorek and Joe Muller, as well as political newcomer Jamey Federico, were elected onto city council in the 2018 election. It was the first election in Dana Point to incorporate districted voting. Constituents in Districts 1, 2 and 3 were able to participate in the city council election, whereas voters in Districts 4 and 5 will vote for their city council representative in 2020.

Dec. 3—A ribbon-cutting ceremony was held for the unveiling of the Hobie Alter Memorial Statue. The monument honors Dana Point legend Hobart “Hobie” Alter, the founder of the Hobie brand and the original Hobie Cat. His concept of the Hobie Cat—which was created to emulate Hawaiian canoes—developed from collaboration with his fellow surfers to develop a simple, easy design. The Hobie Cat 14 was then created in 1968. The Hobie Company celebrated its 50th anniversary for the catamaran in October.

Dec. 5—The Minnesota-based law firm of Jeff Anderson & Associates released a report on clergy sexual abuse in the Diocese of Orange, which contained information, photographs and assignment histories on 72 clergy accused of sexual misconduct. A spokesperson for the Diocese of Orange says that list is erroneous and overinflated. Of those 72, eight men were found to be, at least at one point, affiliated with Dana Point or St. Edward the Confessor Catholic Church.