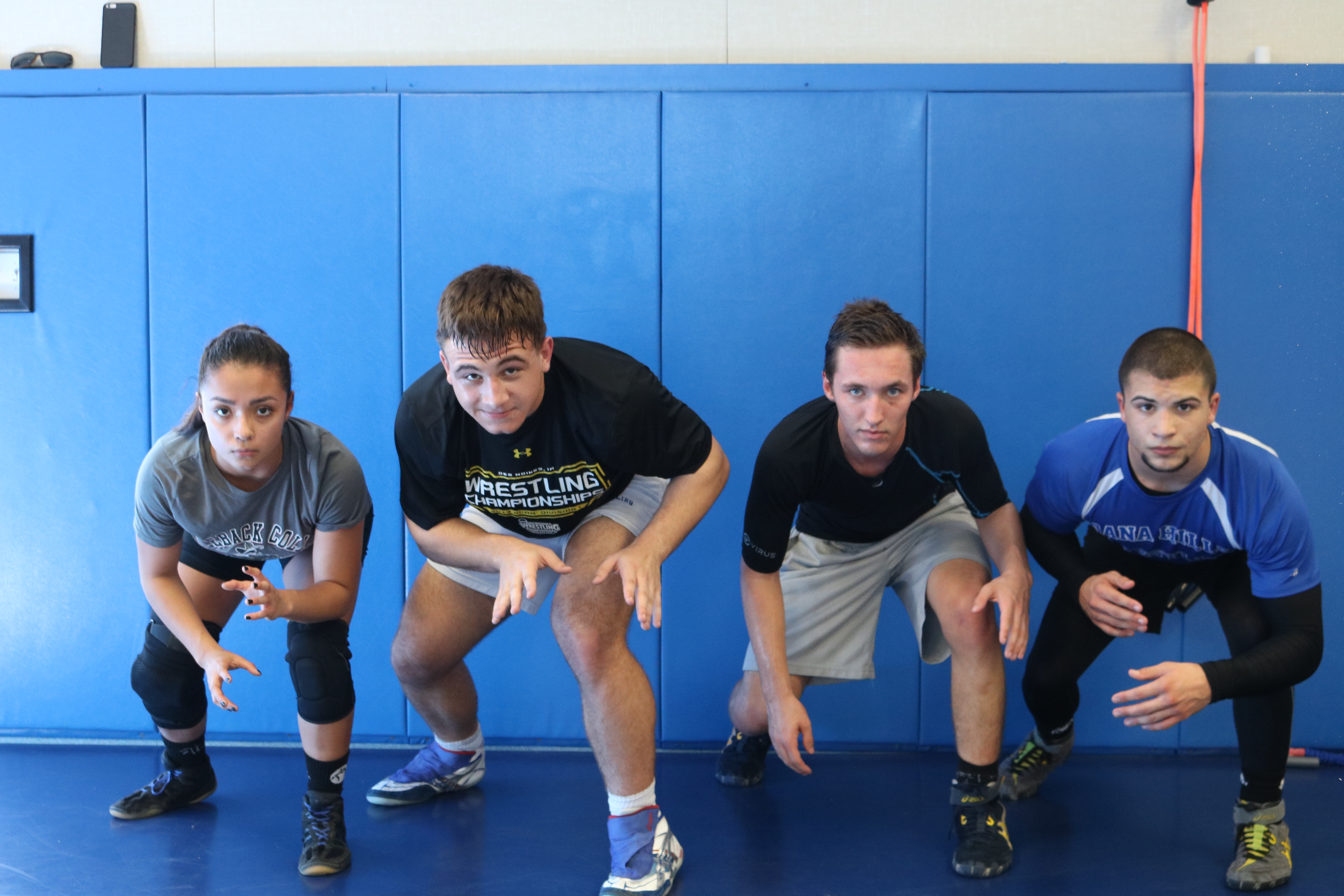 The winter prep sports season is underway, and in our annual season preview, we get you caught up to date on all the athletic programs at Dana Hills High School.

For in-game updates, scores, news and more for all of the DHHS programs all season long, follow us on Twitter @SouthOCsports.

The slogan “One Team, One Purpose” is everywhere during a Dana Hills girls basketball practice. It is on the shirts they wear while on the court, in the coaches’ room, and it can be heard as the team breaks at the end of huddles.

The slogan was the Dolphins’ rallying cry last season, when they appeared to turn the corner and take the program to heights it had not seen in years. The Dolphins won 16 games last year after failing to reach that mark in the two previous years combined. The 2016 season was what Anne Honey described as “the beginning of the turnaround.”

With eight players returning from last year’s team, the Dolphins are keeping the same motto. Now, they are just planning on tweaking it a bit.

Honey and her staff have placed a new emphasis on team defense, and it has been paying off in the early going.

Dana Hills (5-3) is holding opposing offenses to just over 42 points per game, and they have quality wins over Cypress, University and San Juan Hills. The Dolphins defense has held opponents to 39 points or less five times through eight games played this season.

“We feel that our defense creates our offensive opportunities, and we’ve been working really hard on making that a huge focus,” Honey said. “They’ve put in all the offseason work and now they’re going to work and doing it.”

Junior captain Peyton Romo has stepped into the role of the team’s leading scorer. Romo was second on the team in scoring last season, when she averaged 13.4 points per game as a sophomore.

Senior co-captains Alex Williams and Elise Parsaee, along with junior Megan Honey, have been contributing on both ends of the floor while getting major minutes. Freshman Maicie Saia has impressed the coaching staff and has added depth to the roster. —Steve Breazeale

Coming off of a season that included ten ties, the Dana Hills girls soccer team is looking to use their greatest strength to their advantage this year—chemistry.

Only two starters graduated after last season and nine of them are returning, which leaves this team relatively untouched. Along with an impressive returning cast, this season also feature three sets of sisters. Madison and Reid Morrison, Sophia and Bella Hanna, and Victoria and Isabel Barnett bring lifelong chemistry into this tight-knit team this year, which coach Carrie Taylor believes will help in overcoming those stunning ties from one year ago.

“Having ten ties is not satisfying at all,” Taylor said. “But the team gets along great, everyone really knows each other. Now it’s just a matter of having the confidence and killer instinct to go to the goal.”

The Dolphins suffered a double overtime first-round loss in the CIF-SS Division 1 Championships last season, and it left a sour taste in the mouths of the returning players.

“We have a lot of fight, and we are definitely looking to overcome that first round in CIF,” Taylor said.

Notable standouts include junior Reid Morrison, a three-year varsity starter, and senior Chloe Gaynor, who is committed to Pepperdine University.

The Dolphins are off to a hot start this season, and were undefeated with a 3-0-1 record as of Dec. 8. Dana Hills has wins over regional rivals San Juan Hills and Capistrano Valley. —Victor Carno

Size isn’t everything in wrestling, as the Dana Hills wrestling team can attest to.

The Dolphins’ young, and relatively small, wrestling team is looking to use technique and discipline to propel them to CIF competition this year. Headed by coach Reza Abedi, the team isn’t focusing on the tough South Coast League this season, which features powerhouses like Laguna Hills and San Clemente. Instead, they are focusing on preserving their bodies and stamina for the state championships.

“I am a firm believer in technique over size. An excellent technician could overcome a size difference,” Abedi said. “I told them that their season really starts after league finals. Telling someone you won league is not as important as being able to say you placed in CIF.”

Abedi went on to explain that he has witnessed so many athletes lose sight of the bigger picture that is the postseason. Abedi said when it comes down to finishing out the season strong come time for CIF, some teams’ “bodies and minds aren’t up for the task.” Dana Hills is working toward finishing strong, Abedi said.

The Dolphins will have just six seniors on their roster, and a large portion of the team is made up of sophomores and juniors.

The young team has been incorporating a lot more weight training into its practices, as well as practicing situational weaknesses.

Standouts this season include senior Troy Walker, who has found success in many invitationals and tournaments in his career. In addition, Abedi described how Sadie Camacho, a standout returner, is one of the first Dolphins’ girl wrestlers to stay with the program longer than a single season. —VC

Teaching from experience is exactly what the Dana Hills Girls water polo coaching staff is doing this season.

Dana Hills graduate and second-year head coach Carrie Pierce and all three members of the Dolphins coaching staff were members of the first Dana Hills team to bring a league championship to the program. Who better to learn from than someone who has done it themselves?

“All three of our coaches were on the same team in 2011 that brought Dana their first water polo championship,” Coach Pierce said. “Not only is the chemistry great with the coaching staff, but we have been focusing on team bonding (with the players) outside of the pool”.

The team has put on multiple fundraiser events, conducted team building competitions, and has had regular dinner and bowling nights together. All of which helped strengthen the bond between each player on the 2016 team.

After the CIF-SS restructured its postseason divisions this season, Pierce is confident in her team’s chances to make a deep playoff push. The Dolphins advanced to the quarterfinals of the CIF-SS Division 2 Championships last season, and a handful of the top teams in Division 2, like league rivals San Clemente and El Toro, have been promoted to Division 1. The Dolphins will remain in Division 2.

The No. 3 goal scorer in Orange County last season was Sydney Baba. Baba, a returning Dolphins senior who scored 135 goals in 29 games last year, feels her team is ready for the challenges of a new season.

“We have all been working on strengthening our defense, and I feel like we are all a lot closer and stronger this year,” Baba said.

The players are hitting the weight room more this season to work on core and leg strength in order to help them finish strong in each of their matches, which will help for the inevitable overtime games the Dolphins will play this season.

Dana Hills started its new season off strong by recording five straight victories, during which they outscored their opponents by a combined 48-27 margin. They lost back-to-back games against La Jolla and Santa Margarita on Dec. 3 and Dec. 6, respectively. —VC

Through six games played, the Dana Hills boys basketball team has seen a balanced scoring effort from up and down its roster. In four of the team’s six games, the Dolphins have had a different player lead the team in points.

But so far, the balanced scoring has not led to many wins. Dana Hills, which has played several nonleague games and appeared in the Godinez tournament last week, owns a 1-5 overall record. The Dolphins have kept things close, however. Three of their losses came in games where the margin of victory was four points or less.

The Dolphins were heavy on seniors last season, and return a handful of players with experience to the new season. Leading the way are returning seniors Troy Brown and Zach Stirtz. Both Stirtz and Brown led the Dolphins with 12 points apiece in the team’s 57-43 win over Orangewood Academy on Dec. 2.

Newcomers Ben Carr, Adrianne Maboloc, Devan Garland and Reed Romo have all contributed and add to the team’s depth.

The Dolphins are gearing up for a run through the Garden Grove tournament next week and head to Sea View League competition in mid-January. —SB

The Dana Hills boys soccer team graduated 11 seniors from last year’s squad, which has left the 2016 version of the team in search of a footing to start off the new season.

Dana Hills has played against tough competition to start its season, and owns a 1-3-1 overall record as of Dec. 8. Two of the Dolphins opponents this season, San Clemente and Godinez, appeared on the CIF-SS Division 1 and Division 2 preseason watch list, respectively.

The Dolphins return a handful of players with experience, including junior defenseman Robert Reynolds, junior Noah Cook and senior Nicholas Wagener. Cook scored for the Dolphins in its 2-1 loss to Division 1 power San Clemente on Nov. 30, a game in which Dana Hills hung tough against a strong opponent, and Wagener scored the team’s lone goal in a 5-1 loss to Godinez, a Division 2 playoff watch-list team.

After competing in the Aliso Cup tournament, the Dolphins picked up a 2-0 victory over Marina on Dec. 7 for their first win of the season. The team will continue its tough nonleague slate with an away match against Santa Margarita of the Trinity League on Dec. 14. —SB