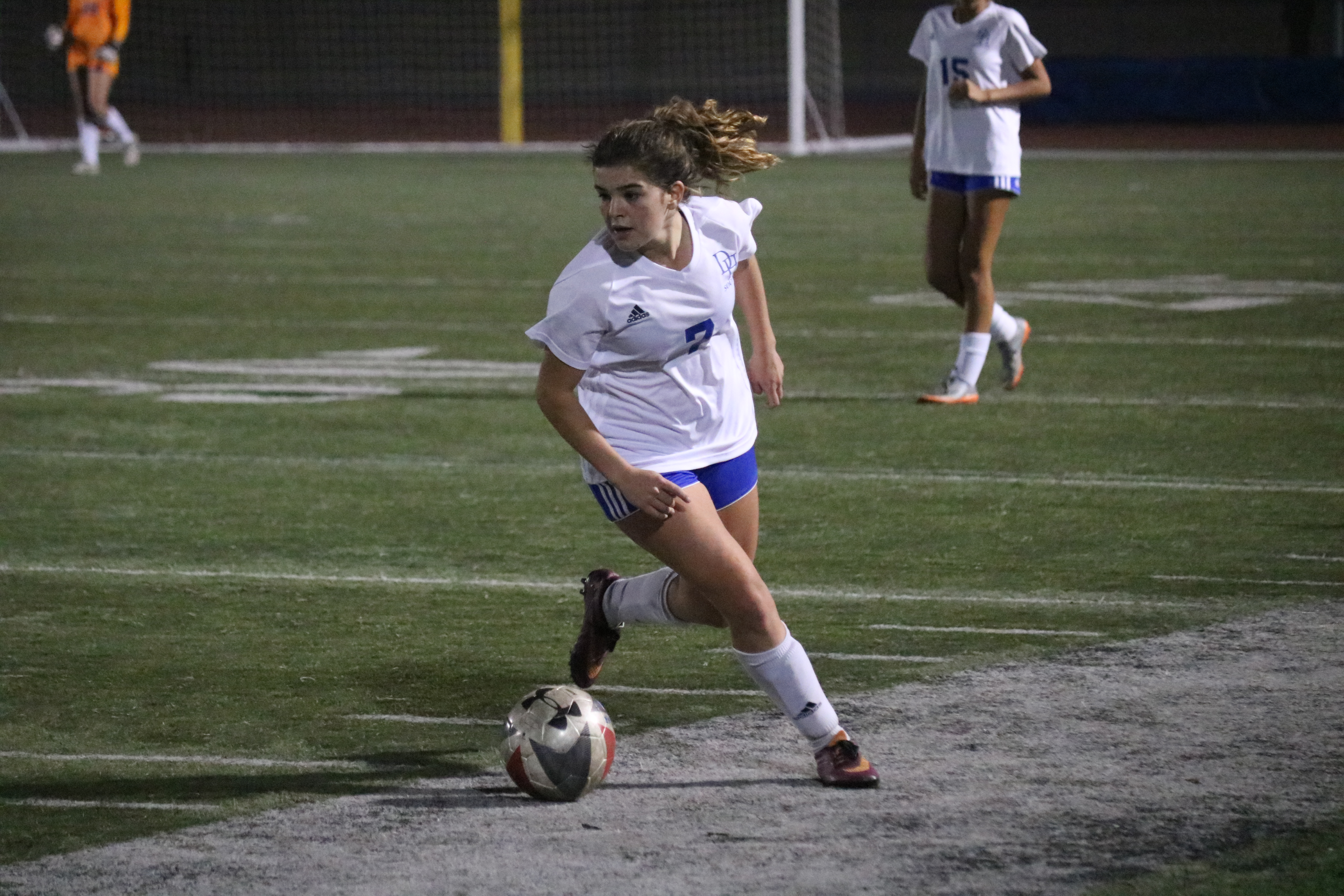 The winter sports season is well underway as the bump-up of the CIF calendar extends to the fields, pools, courts and mats. In our annual preview, we highlight all of the winter sports programs at Dana Hills High School as they enter the holiday tournament season and approach league play in the new year.

For in-game updates, scores, news and more for all of the Dana Hills High School  sports programs, follow us on Twitter @SouthOCSports.

After a first-round bye, the Dolphins’ good feelings ended as quickly as they arrived, however, as Dana Hills lost at home in the second round of the CIF-SS Division 2A playoffs.

The championship was a culmination of four years of work by Coach Anne Honey and a group of players that had grown up together. So while the Dolphins do have some strong returning players, the team also has work to do to match its previous success.

“We’re going from where we were last year and rebuilding all at the same time,” Honey said. “We’re really coming together as a team, and everybody is understanding what their strengths and roles are. Everyone knows to do their job.”

The Dolphins’ leading scorer from a year ago is sitting out the season to focus on academics, but Maya McArthur, who was just 0.2 points off the team lead in points per game, returns for her senior season. McArthur, who will come back from an injury in a week or so, transferred to Dana Hills last season and made a major impact with double-double averages of 14.3 points and 14.7 rebounds per game.

McArthur is one of a trio of senior leaders the Dolphins will count on, along with Olivia Chambers and Camille Deol.

“Olivia and Camille have really embodied what it means to play like a senior, be a leader like a senior,” Honey said “They’ve left it all on the floor.”

Dana Hills’ defense creates its offense as the Dolphins like to get out in transition. Honey said the team will break things down in the half court a little more than last season, but they’ll still get out and run.

Dana Hills is 5-4 through early tournaments as they prep for the move up to the South Coast League.

“We’re ready for the challenge,” Honey said. “We’re excited to be playing in a very competitive league. They thrive on that. They’re gamers, competitors.”

The Dolphins will reunite with longtime rival San Clemente to open league play on Jan. 10.

The Dana Hills boys basketball team began last season with promise. They looked like a much improved group ready to take on league play, but the Dolphins fizzled down the stretch.

This season, Dana Hills is off to another stellar start in tournament play and hopes it has learned lessons from last season.

The Dolphins are 7-3 to begin the season, with their three losses coming by a combined nine points to Ontario Christian, Edison and San Clemente. Dana Hills also sports wins over Irvine, El Modena, Laguna Beach and Capistrano Valley.

The unquestioned leader for the Dolphins is senior Ben Carr. The 6-foot-4 wingman was the leading scorer for Dana Hills last season and can both attack the basket and shoot from distance.

The Dolphins are average in size with most players listed at 6-foot or 6-foot-2, but Coach Tom Desiano, in his 17th season at the head of the Dana Hills program, knows how to make his team versatile.

Dana Hills will take on Woodbridge in the North/South Challenge on Dec. 22 before moving on to the Rancho Mirage Holiday Invitational on Dec. 26.

The Dolphins open league play at home against San Juan Hills on Jan. 9 and play at league favorite Tesoro on Jan. 11.

After two seasons without a league win and only four league wins in the previous four seasons, the Dolphins went 3-3-2 in league play last season to make their first playoff appearance since 2013.

Dana Hills struck in the third minute of that first playoff game but went on to lose, 4-1.

The Dolphins lose much of the core of that team, including its leading scorer and goalkeeper, so several players will need to step up for second-year head coach Mark Torriani.

The Dolphins are 1-1-1 this season, with a loss to St. Margaret’s, a win over Laguna Beach and a draw against El Toro.

Seniors Peyton Moore and Mason Mills and junior Colton Fox each scored a goal in the win over Laguna Beach. Senior goalkeepers Casey Burns and junior Nikolas Tanski each put up a scoreless half in the draw with El Toro.

Junior Michael Bogdonavich returns to bolster the defensive backline and is joined by senior Christian Adame.

Dana Hills has a busy nonleague schedule with dates against San Juan Hills on Dec. 12 and Capistrano Valley on Dec. 14. Over the holiday break, the Dolphins will compete in the Marina Tournament.

Dana Hills will renew an old rivalry at San Clemente on Jan. 3 before opening Sea View League play at Laguna Hills on Jan. 7.

Last season, the Dana Hills girls soccer team took their lumps early before finding its form in the South Coast League portion of its schedule.

Dolphins coach Zaid Malkosh, now in his second year, was focused on building a new system for the team and building the culture of the Dana Hills program. The Dolphins have had strong girls soccer teams, but Malkosh saw the potential that’s continuing to emerge this season.

“Last year, we focused on cultivating a more positive culture to train in and grow in,” Malkosh said. “This year, we’re focusing on intensity, discipline, performance. We’re hoping to do big things this year.”

Last season, Dana Hills went 2-6-2 in its nonleague schedule but turned it around to post a 3-3-2 league record. That flip was evidence of Malkosh’s new system and culture taking hold.

That culture change continued into the offseason as the Dolphins lost seven seniors and Malkosh trimmed to a young group.

“We cleaned up house this year,” Malkosh said. “We cut a lot of players to make sure we have players that can perform and want to be there to create a better culture and help the program grow.”

Malkosh said he’s excited about the skill his team possesses and that the style they play will give a lot of players opportunities to score and shine.

The Dolphins are 1-0-1, with an opening scoreless draw at Capistrano Valley and a 2-1 win at El Toro.

Dana Hills has matches against Northwood, Trabuco Hills and Huntington Beach before the holiday break, and then the Dolphins open up South Coast League play at Aliso Niguel on Jan. 8. The Dolphins’ first match against San Clemente is on the road on Jan. 17.

The Dana Hills girls water polo team has been cast in bronze. The Dolphins have taken third place in the league for four consecutive seasons.

The Dolphins won a CIF-SS Division 2 wild card game last season, but then lost in the first round.

However, with its top two goal-scorers, top two in assists, top two in steals and No. 1 goalkeeper all returning, Dana Hills might be ready to make a run.

Senior Lauren Bellavia led the Dolphins in goals last season at 66 and currently leads Dana Hills through seven games with 15. Bellavia has only played in five games. She also led Dana Hills with 46 assists last season and was second in steals.

Kaylyn Pierce is the senior returner in net and made 7.6 saves per game last season, led the Dolphins in steals and was second in assists with 43.

Dana Hills also has a complement of youth as sophomore Kat Besanceney is the early steals leader with 16 and is second in goals with eight.

Dana Hills is 4-3 to open the year against tough tournament competition. The Dolphins have wins over Estancia, Villa Park, Peninsula and JSerra.

Dana Hills has four more games on its pre-holiday schedule before the Dolphins come back for league play at Aliso Niguel on Jan. 8.

The Dana Hills wrestling program took a hit as it graduated six seniors, including some of its most successful wrestlers in program history.

Dana Hills had seven wrestlers earn silver medals at the Coast View Athletic Association finals to qualify for the CIF-SS tournament and one wrestler advance to CIF-SS Masters, but only two of those seven return for the Dolphins.

Josh Harkey returns at 182 lbs. as a sophomore and showed great promise as a freshman with that league silver. In the first tournament of the season for Dana Hills at Westminster’s Cossarek Classic, Harkey earned second place with three wins by fall in 1:25, 1:18 and 1:39.