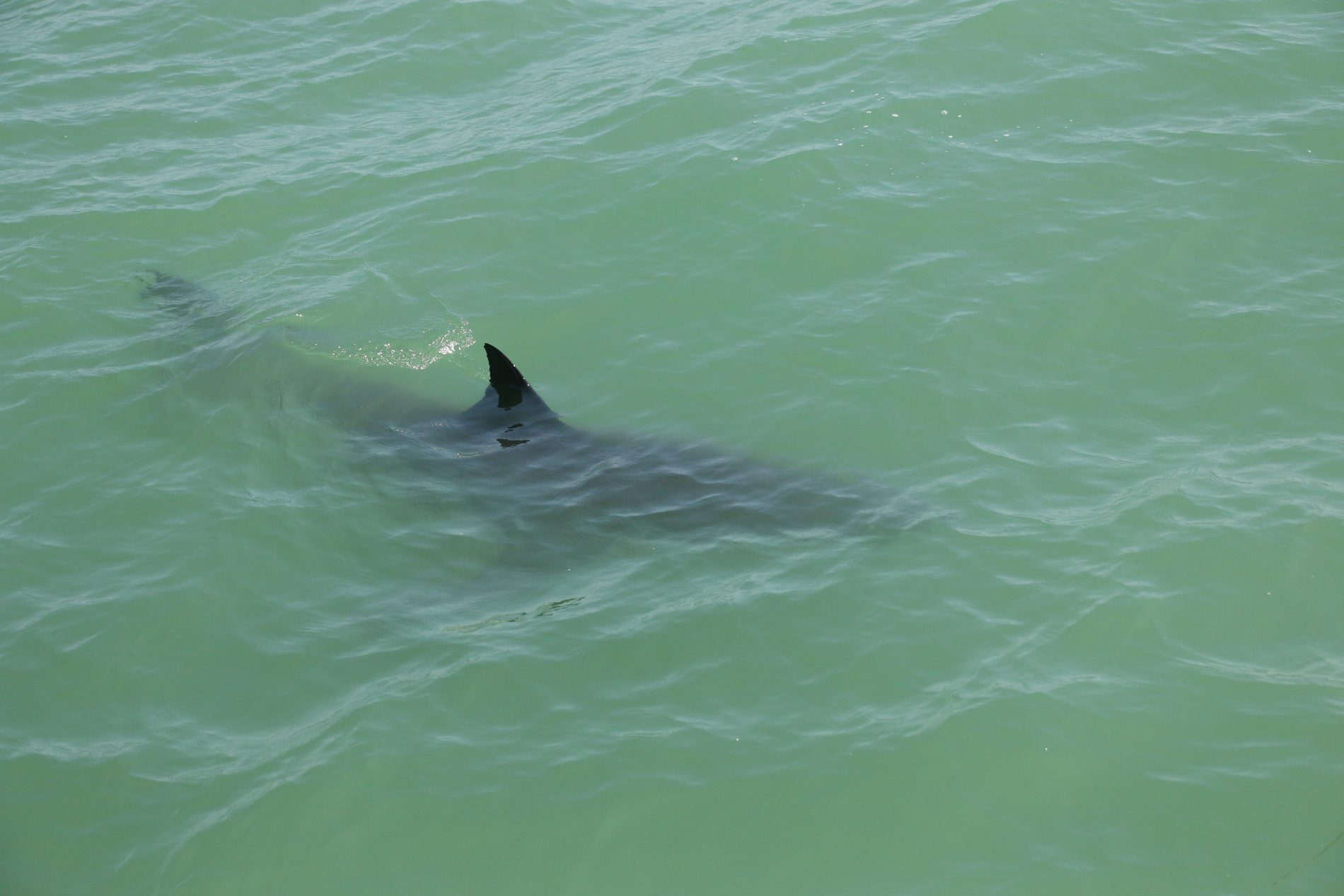 ﻿﻿Welcome to Amity Island: The great white sharks are here, now what?

“There are people who still haven’t made their pick of places this year. There’s no shortage of houses for rent…anywhere. If I run a story saying that a young woman was bitten in two by a monster shark off Amity, there won’t be another house rented in this town. Sharks are like ax-murders, Martin. People react to them with their guts. There’s something crazy and evil and uncontrollable about them. If we tell people there’s a killer shark around here, we can kiss the summer goodbye.” —Peter Benchley, Jaws, 1975

Three weeks ago, my editor at the Dana Point Times and I penciled in “shark follow-up story” for this week’s “surf-tacular” edition. To say a lot has happened in the way of apex predators since then is a bit of an understatement.

Somehow, and it’s apparent that nobody really knows how, the zone between Salt Creek and San Onofre has become shark central. Considering the constant flow of headlines and social media updates featuring fins in them, it’s hard to tell you something you probably haven’t already heard, so this week as I was sizing up my angle of approaching the issue, and I thought I’d add an editorial riff to the current predicament we collectively find ourselves in. Jaws is as good of a jumping off point as any.

In the world’s most famous shark story, author Peter Benchley artfully articulates what happens when out of the deep a great white shark starts terrorizing, and occasionally eating, the summer patrons at the otherwise quiet coastal hamlet of Amity. Mind you, Benchley was writing about one shark. Last Sunday there were 25 great whites spotted yards from the shore in Capo Beach. A fisherman hooked an eight-footer off the end of the San Clemente Pier the following day. Lifeguard personnel at city and state beaches are already on a heightened state of alert and have issued too many panic-inducing closures to count at this point.

As you read this, you’re probably figuring out how best to spend your extended Memorial Day Weekend. I’m guessing “Go to the beach” isn’t high on your list, “Fashion a harpoon” maybe? We’ve got a real-life Amity situation playing out right before our eyes. To date, we’ve gotten by with temporary beach closures when sightings are reported, but with less than a week before local schools let out and summer vacation officially begins, the beaches will soon be packed. Or at least they used to be. We are in uncharted waters here.

“I’ve only surfed a couple of times since the attack.” I hear that a lot from friends. What I don’t hear is them complaining about the lack of swell, or constant spring winds, or blanketing fog.

“At least it will keep the crowds down.”

That used to be a funny, albeit somewhat cliché joke around town. Nobody’s kidding anymore. Dana Point and San Clemente are communities that thrive on seasonal business. Junior lifeguard programs, surf camps and summer programs for kids could all be profoundly affected by the explosion in shark presence. I’m a parent of a 9-year-old girl. More than anything I want her to spend the summer surfing and swimming in the ocean with her friends, but seeing what we’ve all seen, how can we honestly feel good about letting them doddle out past the surf line?

And what becomes of the vacation rentals, hotel bookings, retail and restaurants? Will they suffer a slump in business? Will Fisherman’s on the San Clemente Pier start offering a “feed the sharks” option to their menu? Or will the sharks be a boon to the economy and bring the tourists in droves? Who knows? Like I said, we’re in uncharted waters.

Over the last few weeks, I’ve spoken with dozens of people who have spent their lives around the ocean. Nobody seems to be able to explain what we’re experiencing. Some say the sharks have always been here, we just have drones and iPhones to film them now. Some point to climate change and the warmer water. Others point to the sharks’ food source. The expansive sandy bottom around Capo Beach is an ideal habitat for skates and rays, which the juvenile great whites pop like potato chips. Whatever the reason for them being here, the other part of the conundrum is how to get them to leave in an environmentally conscious way. The sharks are hanging tough.

Anybody got any ideas?